This morning when I finally awoke, around noon, the breakfast fairy was just returning. He found another great little shop and bought all types of pastries to try. When in Warsaw!!

I pretty much figured that today would be a down day, so we decided that we would finally get around to washing our clothes, which we have been wearing for the past three and a half weeks!

In typical European fashion, the washer was complicated. We chose three different options; water temperature, type of clothing and speed of spin cycle. We threw in the first load, pushed go and somewhere around the two,  to three hour mark,  I figured it was never gonna stop! So, I fiddled with the buttons and finally got it to spin and spin, and spin,  and it finally stopped. It took a while before the door would finally open and allow us to take out our clothes! These European clothes washers certainly like to hang on to your clothing!

The next load, I tried something different; it was done so quickly that I wondered if it even washed, so I pushed a few more buttons, got it to rinse a few more times, and then hit spin!

That seemed to work. For those of you that live in Europe, or have visited, you know that they do not dry their clothes in a machine, so we have clean laundry hanging everywhere!

Gratefully, there was so much activity passing right by our window, that I did not mind being inside one bit! 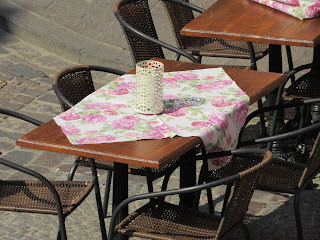 Horse-drawn carriages, dogs, flowers, a man in a chef hat with a large spoon and two cafe's full of people, oh and the kitty in the window, across the street. It was MAGIC and my face was smiling, without even getting out of my jammies! 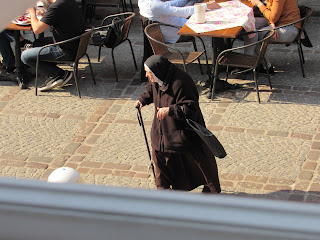 Finally, around 5:00 pm, I managed to work up the energy to head out and about, and boy was I glad that I did. There is so much to see, right here in Old Snug Town that we will not even begin to explore it all, so seeing a little bit tonight was a good thing.

We found ourselves in the Old Town Market Square, which is filled with post-war replicas of Old Town before the Germans demolished it in 1944. For some reason or another, the Mermaid monument has meaning to the Polish people.

There was a couple playing primitive musical instruments in the square and many unique signs and storefronts; I just love the flower and window displays. We continued to walk around and came across the Warsaw Uprising Monument, which was quite surprising as we had no idea that it was there. We walked around the corner and there it was, a reminder of the atrocities that occurred in our recent past. Sobering, to say the least. 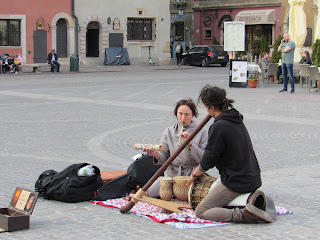 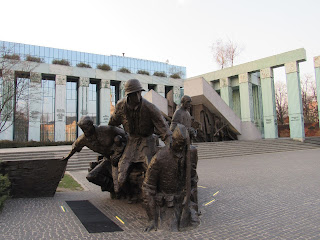 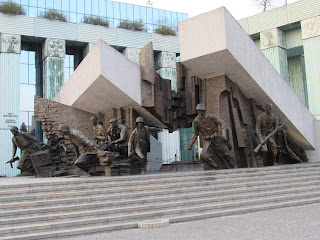 Across the street from the monument, we thought there was a museum, so we went across the street to check out the hours, for another day. What we found instead, was another church; holding mass. It was beautiful, yet plain in comparison to others we have seen. It did have an interesting, modern mural painted in the dome, over the altar. It seems that there is also a museum, too, maybe in the basement? 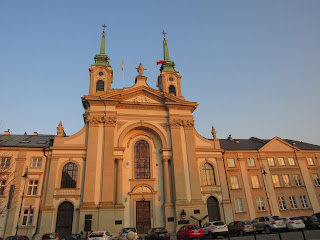 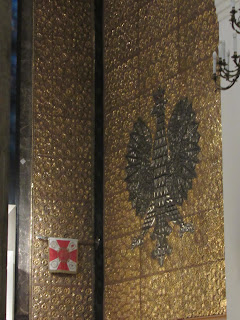 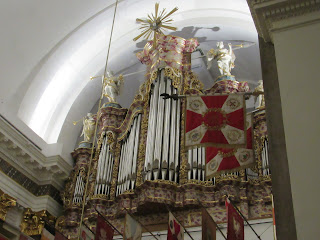 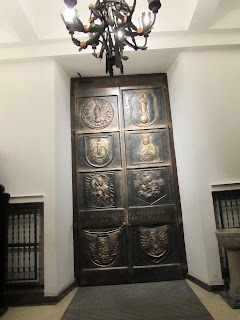 We also went into the Church of the Holy Spirit which was also holding mass, and another one that was just a doorway, in a building. I just can hardly believe how many churches hold mass every day, and how many people attend.

Eventually, we found our way back to our street, and because I watched the man in the Chef hat, with the huge wooden spoon, stand all day long, in front of the restaurant, trying to drum up business, (and I felt sorry for him because the outdoor cafes, in the sun, were packed) we decided to eat there.

It was a kinda' fancy place with white tablecloths, fresh flowers on the tables and candles. The menu was full of things like "Goose stomach", "Beef Cheeks", "salad with liver" and "Boar Stew". I had perogies, two of each type; meat and saurekraut, cabbage and mushroom, and potato and cheese.
They were served with sour cream and caramelized onion and were amazing. 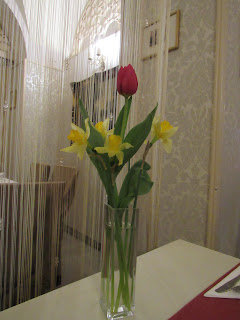 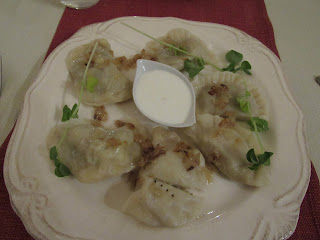 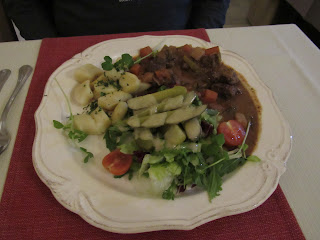 Joe had Mutton Goulash which was also delish. We cleared our plates and when the gal brought our check, she also said, a "gift for you" cherry cordial; enjoy. (the theme of this trip, "Here, for you!")The entire meal with a huge beer and bottled water was less than $25; it seems that you can eat very inexpensively in Poland. 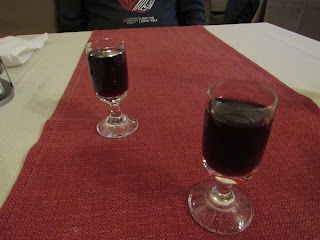 After dinner, we strolled through the area where we had dinner last night. There were bunches of buskers and many restaurants with umbrellas and heaters; the atmosphere was charming and quaint, despite the cold wind that was starting to pick up.

We picked up some desserts and decided to call it a night; it was certainly time to give up the ghost! 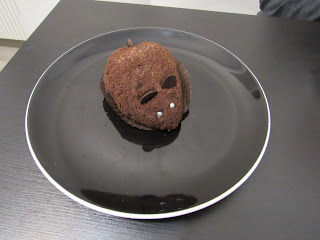 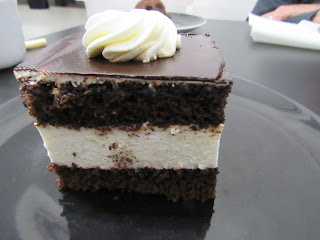