Today is our last day in Vienna; we were scheduled to leave Vienna at one in the afternoon, but our flight was changed to 8 pm. That might have been a good thing, as it gave us a bit more time in Vienna, but at this point, I am so tired I just wanted to get where we were going.

At St. Peter's Church we met the "Father" that was about to say mass. He welcomed us and gave us an information pamphlet. It explained that St. Peter's was Vienna's first Christian church built when Vienna was still a Roman camp under the name Vindobona.

The original church was replaced by a three-nave Romanesque church which made way for the present magnificent Baroque architecture, built by Lukas von Hildebrandt at the beginning of the 18th century. Mass has been celebrated daily for 1600 years which explains why no matter when you are there, mass is either just beginning, or ending!


We were fortunate to see the ending of the mass at St. Stephens Church and enjoy listening to the South Hampton University Chamber Choir; the acoustics were remarkable, as was the choir.
We had a better view of the stones and the cross and the front of the church, behind the altar there was a mirrored looking banner with a cross, too. I am certain that many of these added installations are due to the fact that we are visiting during Lent. 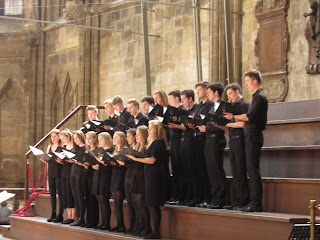 Once I was finally ready to eat, we decided to go to the little bakery that Joe has been going to, in the morning, to pick up breakfast. I wanted to meet the lovely Polish woman that he met as she sounded lovely.

Fortunately, she was there, and she WAS lovely! I had a perfectly sized ham, cheese and cucumber sandwich, with the best cup of coffee I have had in Europe, and a few bites of Joe's apple strudel. We chatted about Poland, and I told her that my mother's maiden name was Koveleski. Just as we were getting ready to leave, she packed up two of the most beautiful desserts from her display case and said they were a gift, from her to us. 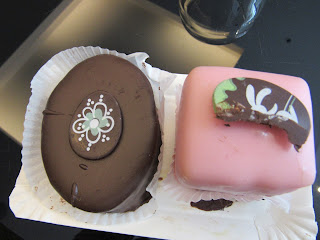 She bid us a safe journey and we bid her a blessed life. One of my favorite things about traveling is meeting people.

After we ate, Joe asked me about my left eye, and yes, I had noticed and chosen to ignore, how puffy and red it was. As a matter of fact, BOTH of my eyes are quite puffy and I have a few broken blood vessels here and there, and I know all of this is from burning my candle at both ends, so I took his advice, and headed back to the hotel lobby to wait for our ride to the airport.


It was the best choice, as I could hardly keep my eyes open and my feet moving. We had arranged for the same driver to pick us up at 4:30 and hoped that he would actually show up. At 4:35 a gentleman from the front desk approached us and asked if we had a driver coming for us, we told him that we did, and he told us that he had called and would be a few minutes late. How is that for being considerate?

Once we got to the airport, we had hours to wait for our flight, but once boarded our Wizz flight, I was out and woke up in Warsaw. I was grateful for my wheelchair transport as it was miles to and from the gate. Most of these flights have been boarded by taking a bus out to the plane. Very different than at home.

We were able to skip the line for a taxi, and gave him our address. Because we are staying at an Air B&B, in Old Town, our driver dropped us off about a block from our apartment, which wasn't too bad other than all of our luggage and the cobbled stone streets and the fact that it was nearly 11:00 pm with no one on the street to ask for help, if we needed it, to find our place.

As luck would have it, we quickly found the address and proceeded to put in the code to open the outside doors, which would give us access to more doors, and then our apartment. 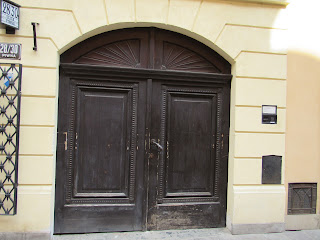 We put in the code, over and over and over, and the door still would not open. Just as we were contemplating what we were going to do, God sent angels our way. A young couple, walking down the street said, "Are you having trouble? Is this an Air B&B?"

We said, "YES!" we cannot get the door to open. The young guy tried the same thing that we did, to no avail. Finally, I asked if he had a phone, and if he could call the number that said, "If you have trouble, call this number." 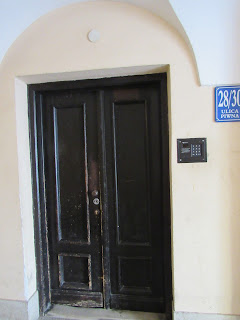 He called the number, explained the situation and then hung up and said that the person thought he was a prankster, playing a joke. This was NOT good news! Then Joe said, "Are those first numbers the international code?"

The guy started laughing and said, "YES!" we all laughed and said that we guessed it was a prank call, after all! bahahaha

He called the number correctly and got our host on the phone. He was baffled as to why the door did not work and told us not to worry; he should find someone to open the door for us. we profusely thanked the young couple and they went on their way.

Shortly, a short, stocky old lady, in her bathrobe came down and opened the door. She waved us in, obviously annoyed and waved us up the stairs. Now our apartment said, the first floor, but apparently, in Europe, the first floor does not mean ground floor!

After two and a half flights of stairs, there was our door! The lady handed me the phone and it was our host, apologizing and telling us how to come in and out without the code. All is good; we are not sleeping on the streets of Warsaw tonight!


It was now after 11 pm and we had not eaten in hours, I said, "Come on, we are going out, we will find something!" Now you must remember, Joe is usually snoring about now, so you have to admire his willingness to humor me, in a strange country, near midnight! lol 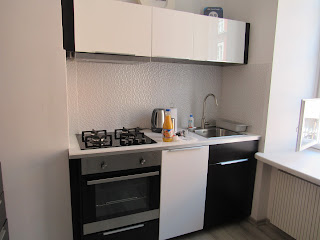 Once we walked out of our door, there were two young guys, across the alley from our place, pushing buttons, on a code pad; we laughed and asked if they were trying to get into their Air B&B and the said that they were.

We told them that we had just had quite the experience with our entry into our place, and we asked to see their code. You have to actually enter a code and then a key symbol, and then the code to the door before it will open. Theirs actually worked, so we were their angels! My life is funny like that!

We continued passing cafes that were closing up and eventually found an Irish Pub that was OPEN!!! We went in and ordered a large beer, a glass of milk and two meals; pierogies and kielbasa, which came with fries and a salad; everything was scrumptious. The total bill; $26. 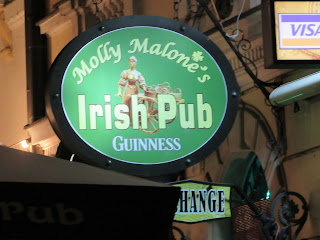 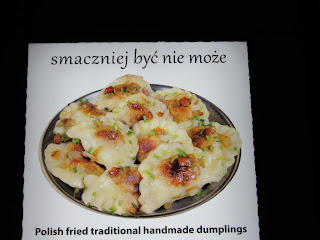 I cannot believe that I didn't bring my camera, and I couldn't believe that we were out with all the young kids at the pub after midnight. Shortly after we got there, guess who showed up?

Yup, the boys that we helped into their place. I asked them if they were following us and they laughed. They were from Norway.


We ate and headed home. It is so nice to have an apartment and be out of the hotels. Everything is perfect. Now if I am able to figure out the washing machine in the morning, we will be golden!