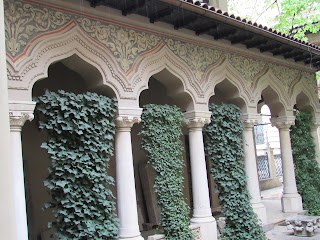 Last night was a long night; couldn't sleep, sore throat and a miserable cold! Boo...not a bit happy about this at all, but what are you going to do?

Joe went out for breakfast and came back with a ham and cheese croissant, which hit the spot. I ate that and he headed to the "Farmace", to see what he could get for my cough. He came back with some sort of mucus thinner, which does not appear to interact with Bosulif, so now I have to decide whether or not I am brave enough to take it.

For the moment, my albuterol and Tylenol seem to be making my day tolerable.

It was a rainy day, the first we have run into on our trip and it suited my mood perfectly. Still so much to see, right outside our window. Thank goodness for buskers!

Eventually, I got dressed and headed out to see a few things in Bucharest. 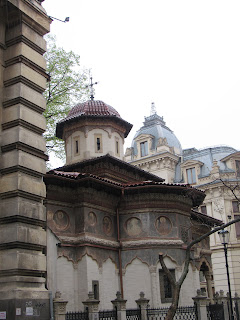 The first place we stopped was Stavropoleos Church, which was built in the 1720s in Romania's Brankovenesc style, which includes Byzantine, Auttoman, Renaissance and Baroque elements. Is the most unique, and breathtaking church that I have seen thus far. Maybe it was the dark rich colors of the frescoes and the detailed arches and carvings that stole my heart, or maybe it was just the warm and cozy feeling that it gave you, just standing in the church.

Outside of the church, right next store, was a beautiful courtyard, with a wrap-around walkway covered in arches and vines; if it stops raining while we are here, I hope to come back and take more photos.

We continued on around the block and viewed the Palace of the Deposits and Consignments. (the PALATUL CEC) which was unique and also stunning. I love the domes and architecture, so much detail went into the outside of this building, that it makes me wonder what it looks like, on the inside! 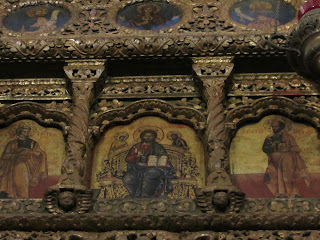 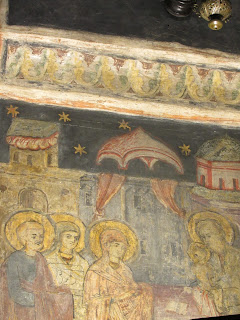 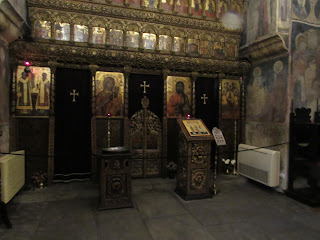 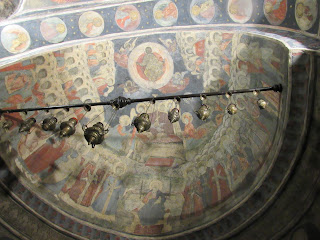 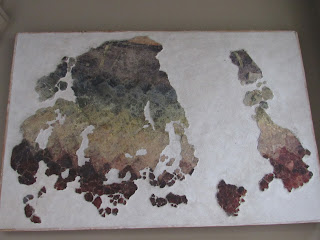 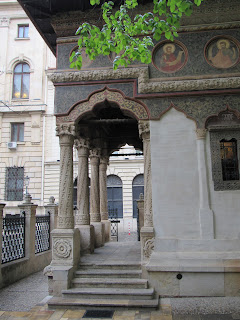 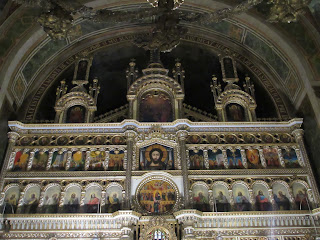 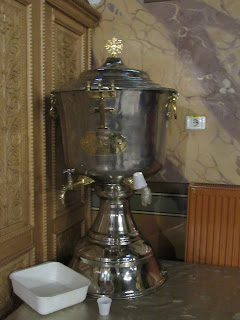 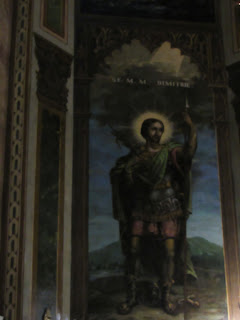 We are not exactly sure what it is, or whether or not we could go inside, so I satisfied my curiosity by taking pictures of the outside of the building, in all its' glory! 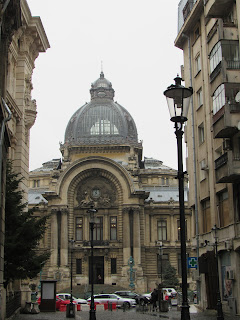 The architecture here in Old Town, and on our drive in was simply remarkable. Huge old mansions, some abandoned, some that have been repurposed into other things such as hotels, and others that are currently undergoing facelifts; they were all magnificent.

Next on our stop was a jaunt down Calea Victoriei, the first paved street in Bucharest, where we ran into Biserica Zlatari, another church where people took their praying very seriously. They were touching and kissing the artwork and the swords. I did not wish to intrude, so I have no idea what the swords were, or why they were in a church. We took a quick look around, and left, silently.
That church was more ornately decorated, like many others we have seen in Europe. 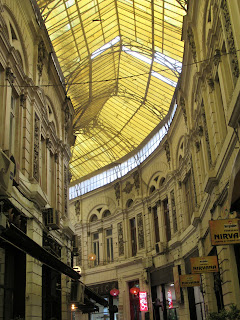 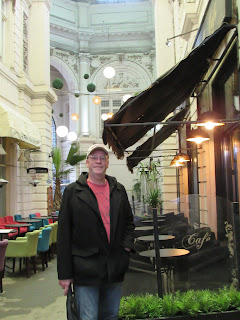 After leaving "Zlatari" we entered into the "Pasajul Macca-Vilacrosse" a fork-shaped shopping passage from 1891. It was full of hookah bars and was lit by a yellow stained glass arch.

Afterward, we stumbled upon another small church: Biserica Sfantul Nicolae Selari. It was a bit dark, with an older gentleman sitting right inside the door, behind some glass.

I was not sure whether or not we could enter, but he waved us in. It was amazing, of course, with dark frescoes that appeared to be preserved, rather than restored. There also appeared to be women working up in the choir area, on drafting tables, and I wondered if they were doing preservation work, for the church. 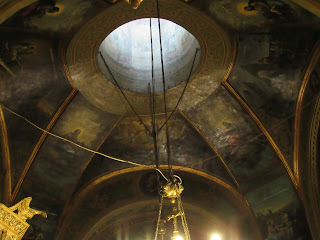 There was also a very old man, with white hair and a very long beard. He was sitting on a chair, wrapped in a robe and a scarf, with a woman kneeling in front of him. He had his hands on her and appeared to be praying. I wondered if he was a healer, and if he was, I wanted to be next! 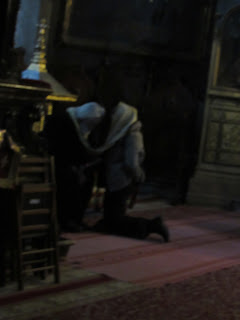 On our way out, I tried to ask the man behind the glass a few questions; he quickly came out and said yes, yes, but he had no idea what I was talking about!

I wanted to know if I could watch the ladies up top, and if the gentleman was a healer. He took me into a little room with candles and turned on the lights, I told him, "No, that was not what I was talking about." He could not understand me at ALL! I took him with me inside and pointed up to the ladies and he started turning on more lights!

I believe he thought that I wanted to take photos. I finally gave up, thanked him, and left. It is times like this that I wish I knew many languages.

We walked around a bit more, stumbled upon graffiti-filled walls and another wall that appeared to be falling down. There was a building that they were restoring and cafe's a plenty. 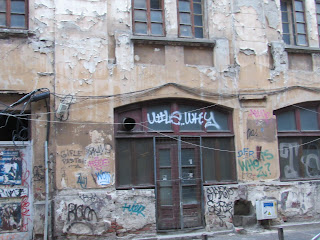 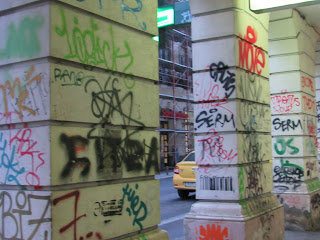 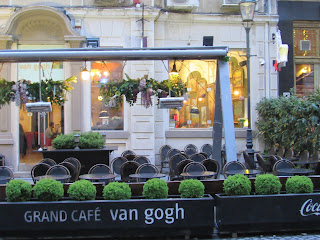 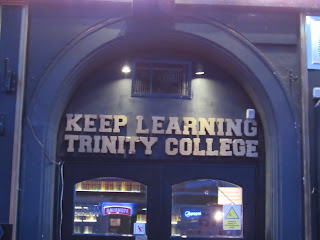 I decided that soup may be a good thing for my cold, so we checked a few places, and ended up back at the same place that we ate last night. I had chicken soup that tasted like beef vegetable, but with chicken chunks, and Joe had Ham and Bean. There were both very good, and hit the spot! 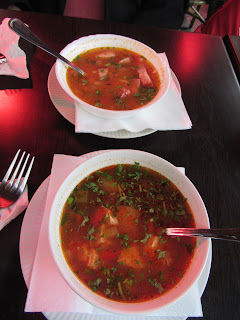 When we finished our soup, we decided to ask about the Papanasi's. The waiter had to go and get someone from the back, that understood English and he explained that it was a traditional Romanian dessert, like a donut, but not, with jam and sour cream. 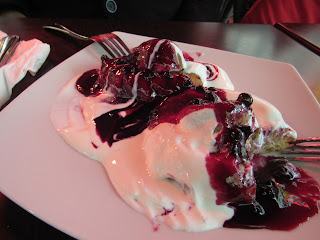 We said we would try ONE to share! Of course, he brought out two; one as a gift! Bahahahaha
And I was glad that he did! It was scrumptious! Light and fluffy and the perfect amount of sweet and sour. Papanasi's are "very good", just like we have been told. They are pronounced, papanashi, and I will remember that name and my first bite of that delectable dessert.  I just do not know how they cooked them to be so delicate, with so much flavor.

It was a perfect way to end the day, or should I say a few hours that we actually ventured out.