Spending four days in Florence was a luxury! It allowed us time to visit the city without absolutely killing ourselves, although Joe did wake up with a bit of a cold. I suppose you could visit the city and hit the highlights in less time, but I am only good for a maximum of five hours a day if I am lucky.

I also feel as though you could spend weeks here finding the hidden gems, down every little alley, around every corner.

This morning/afternoon, we were serenaded by three men; two guitar players and a guy on the drums. He literally has his drums on a platform with wheels. They also brought their two little boys who were drawing chalk art in front of where they were playing in the street with a Pinocchio puppet dangling from the top hat cymbal.

There were boys dancing in the street and people cheering; sure puts you in a great mood waking up to such joyful beings right outside of your window. 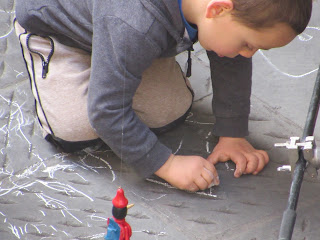 Eventually, we ventured out, (3:30, but who's counting?) and took a stroll. We came across one of those people, an old man actually, that paints themselves and their clothing and stands on a pedestal, waiting for you to tip them to make them move. He was so remarkable that I DID tip him! And he reached into his book and handed me a quote from Leonardo DaVinci. He was very, very cool. 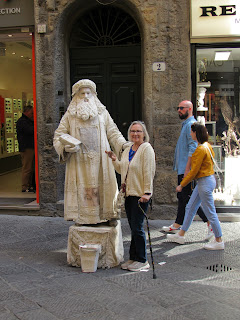 We walked through Palazzo Vecchio and snapped some photos of a really cool statue/fountain that was spewing water everywhere, and a modern, mirror looking thing that looked like a football/bean. I tried to be all cool and take one of those cool photos that I see all of the young kids do, but I failed epically! 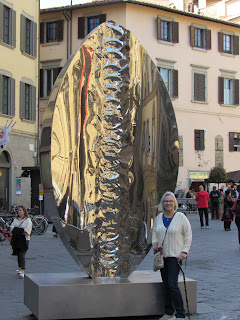 We continued down the street and came to shop full of Pinocchios! It was adorable and we learned that the author of Pinocchio changed his surname, to his mothers home town name as a stage name; he was born in Florence in 1826. 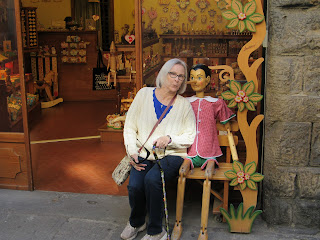 Apparently, Sunday is dog walking day as we saw dogs, in every shape and size out walking their owners. It was quite comical to see the dogs heading every which way but the way their owner wanted them to go; I even saw one just sit down in the middle of the road and refuse to move! It was hysterical; guess I am easily amused! 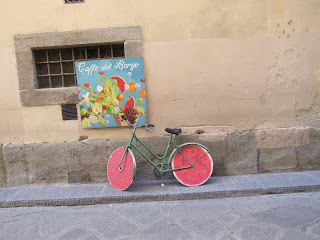 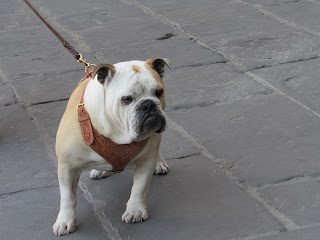 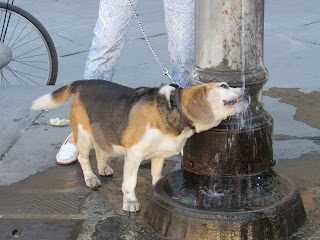 Then there were the people just hanging out on their balconies in the square. We talked to a leather shop owner and asked him if the number of tourists was typical for this time of year, as we thought that we were still in the low season tourist time, and he said that yes, this was typical, but the perfect time to visit Florence as the weather is fabulous and there are not too many tourists. He said starting in a few weeks it was going to be getting hot and there will be so many people that you cannot even walk. We thought that it was pretty crowded now! lol 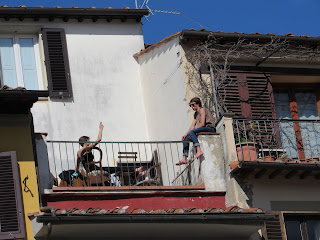 We finally made it to the Basilica di Saint Croce which had a fee, which we did not have to pay to enter; I am loving my Medicare card!  It is a beautiful church that has many Rennasaince artists such as Dante', Galileo, Machiavelli, and Michelangelo buried there.


Much of it has been restored but you could see all of the places that the frescoes had been removed for restoration. I am just amazed at how they have restored so much artwork, in all of the churches that we have seen, and just how opulent every single church is. The size alone is enough to marvel at, but then when you imagine that every wall and ceiling is painted with some scene, I am guessing from the bible, it is mind-blowing. 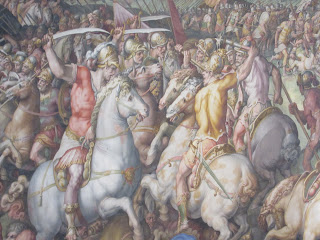 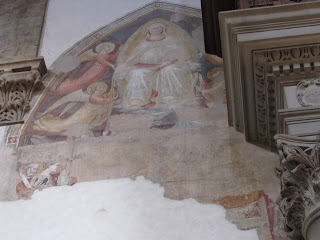 The marble, the tombs, the gilded altars, and arches make my head spin. 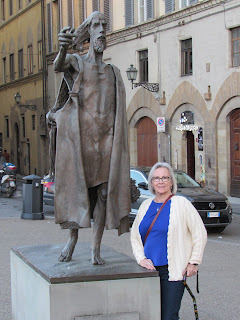 After leaving the Basilica we headed towards our original goal, Piazzale Michelangelo, which was across the Arno River and up a HUGE hill with many stairs. It took me forever to get up that hill, but every time I turned around the view of the city just kept getting better and better, so I climbed, and climbed, all of the ways to the top. 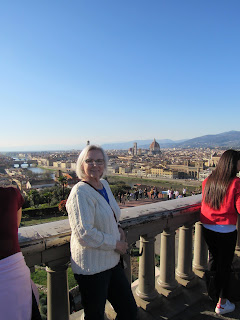 At the top was what is said to be the best view of the city, and I would have to agree; it was spectacular! There was also a bronze David up at the top of the Piazzale, too, along with tons of vendors. Everywhere there are tourists, there are vendors.


The ones that annoyed me the most were the ones from Africa, the ones that come up to you and are all friendly, and offer you a gift, "From me to you," and then start with some sob story, give you more "gifts" and then ask for money. It kinda pissed me off! Why come from Africa, to sell trinkets to tourists in another country, by harassing them. Not Cool!


After spending some time enjoying the views, we headed back down the hill, which was harder than I thought. My damn legs just didn't want to work very well. Thank God, Joe and my cane were on-board with helping me to the bottom.

At the bottom, we decided to have dinner and stopped in one of those cool cafes. My ravioli was alright, but Joe's gnocchi's and chicken cacciatore were great! Luckily, since my ravioli was not top notch, I had room for my most favorite ginger gelato on the way back to our room. I even had room for a scoop of Honey & Cinnamon, too. 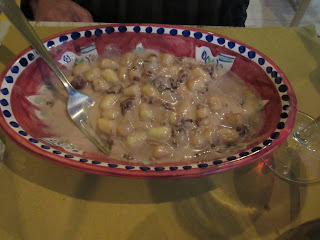 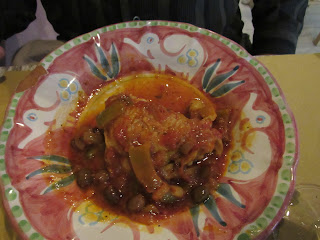 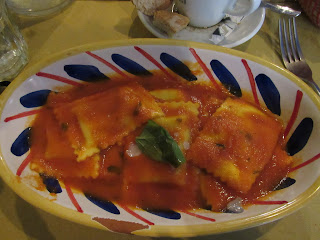 It seriously was the best gelato I have ever had, with the exception of the gelato in Lyon France. We had one of those buy ten, get one free punch cards and only made it to eight, so we paid it forward by giving it to a family of four before we left.

I will miss that ginger gelato!

On our way back we were fortunate enough to run into another chalk artist and some interesting art and door knockers. I swear, it does not matter where you look, you will always see something new and exciting in Florence, Italy. 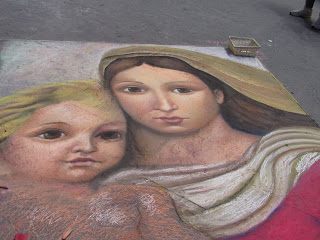 Thank you Florence for a lovely four days; we head to Vienna, Austria tomorrow.

Photos from around Florence: 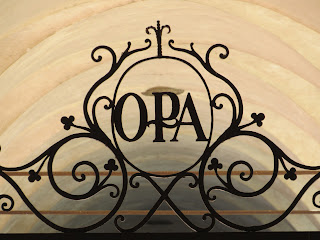 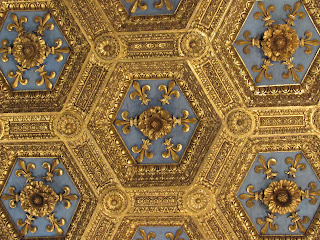 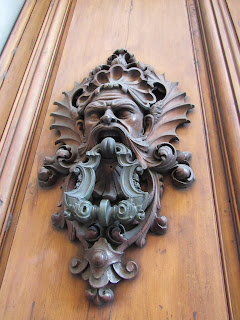 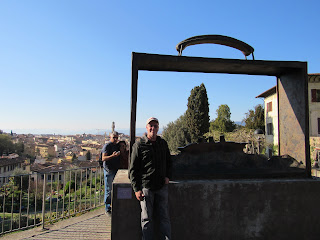 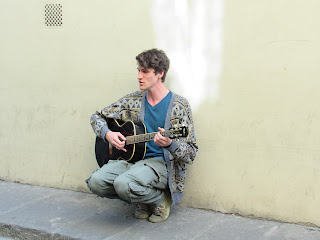 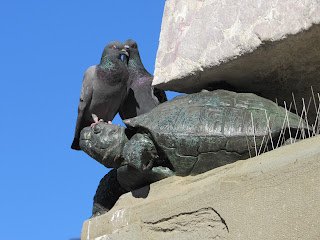 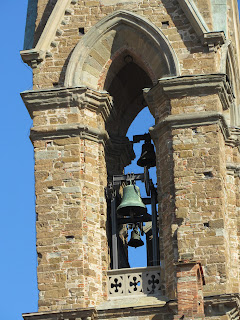 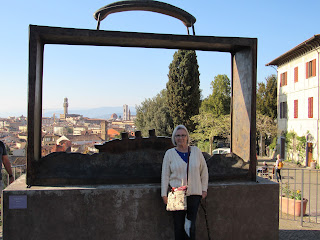 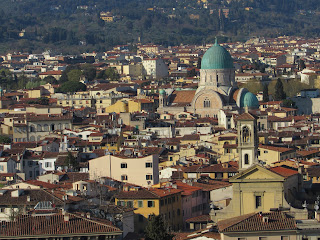