We survived the night! It was a rock and roll kinda night, and it lasted all night long! I loved the motion, but not the creaking sounds that the ship made. Definitely, a night to remember, but we woke up safe and sound in Alicante', Spain.

As usual, we had to skip the taxi line in order to get a younger taxi driver that spoke a little English and also had the translation app. It wasn't easy and the older drivers, ahead of him in line were not too happy. I really get annoyed at their protocol, as we are the paying customers that are going to be spending several hours, in close quarters, with a person; I feel that it is our prerogative to choose who that someone will be.

I still remember refusing a cab in New York City, and in South Beach Miami, in my twenties, because the cab drivers were jerks; I simply refused to go with them; apparently things have not changed!

We told the young guy, Raul, that we would be happy to wait until it was his turn, but he talked to the other drivers and got their blessing; mostly because we refused to get into their cabs. lol

Cindy really wanted to go and see the Coves de Canelobre Buscot, which are said to be more than seven million years old and to have been discovered by the Arabs during the 10th century.

The drive to the caves was about thirty minutes and the terrain looked much like the dry, scrubby mountain regions of southern California. Not much to look at, in my opinion as they got little rain and there was little more than dirt and gravel to look at. Once we arrived at the site we had to wait thirty minutes for the next tour. and the tour took forty minutes so it would not leave us much time in town, as it was an early, "get on the ship" day. 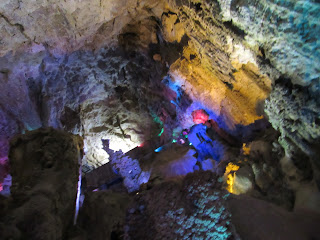 This cave was like many other caves, full of stalactites and stalagmites in many different shapes and sizes. The most dramatic stalagmite is the namesake of Canelobre' and is a chandelier-like column that rises to more than 80 feet from the cavern floor.

Caves are fascinating, and always beautiful, and I am always amazed at what lies beneath the unsuspecting ground that we walk on, with these huge cavernous voids below our feet.  It seems that they actually hid planes in this particular cave during the war.

I bet if I spent a few hours in there that I could have come up with more shapes to add to their "face", "iguana" and "elephant leg"! Thankfully the stair climb to the natural opening was optional! lol We opted out, between my lungs and Cindy's knees we had walked enough stairs!

After our tour, Raul was intent on showing us his city despite the fact that we had very little time. He said he would go rapido, and he would make certain we did not miss the ship! lol So we drove to all of the highlights, even through an alley that really doesn't allow cars. He just said, "No, Policia, let's go!" 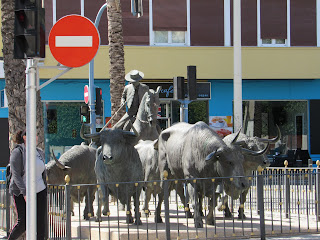 We really didn't see much, but the city seemed delightful, although I believe that the feeling was not quite as heart gripping as Malaga. 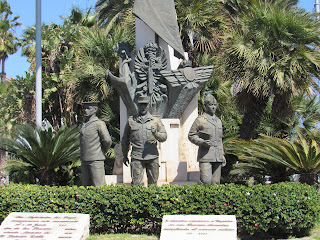 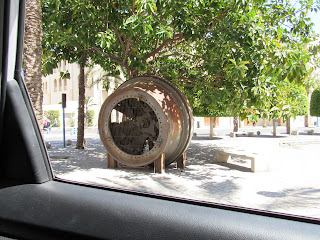 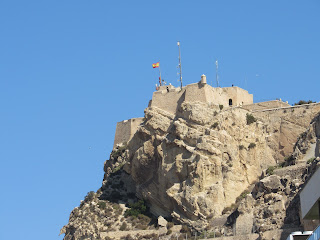 We reluctantly headed back to the ship for our last night, on our way back to Barcelona. 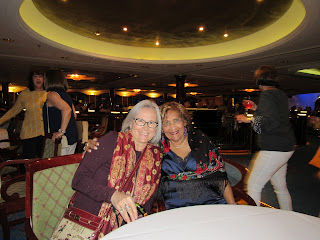 As you may recall, we met a sweet woman, named Genia, from Canada a few days ago. She invited us to have an authentic Indian dinner with her and her husband, made by an Indian chef on the ship. We were able to change our dinner reservations from four to six and were also able to sit in our favorite waiter, Bariane's station.

I was not certain that the Indian food would agree with my disagreeable stomach, or if I would even like what was going to be served, BUT let me tell you, we all LOVED it! I haven't a clue what any of it was but it came out of the kitchen family style and the six of us cleared the platters!

There was some sort of chicken curry dish and rice, an onion frittery type thing, some sort of white "sauce" that I put on everything, a side of chopped cucumbers, peppers and tomatoes, a flat thing that tasted sort of like popcorn made from lentils and some flatbread. It was all delicious and probably one of the best meals I had on the ship. 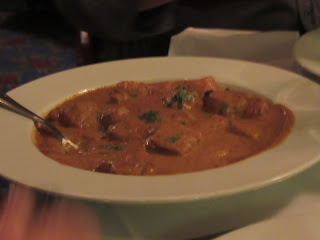 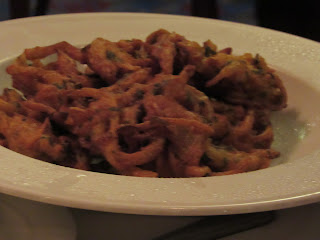 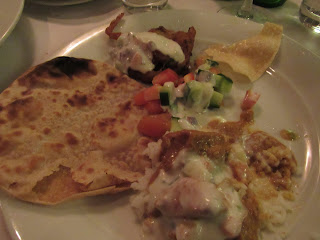 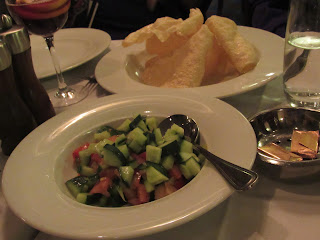 It was a grand way to end this portion of our adventure, and while we will be sad to leave our friends behind, we are excited to continue on our journey. Tomorrow we head to Florence, Italy.


All in all, it was a fabulous cruise and I was so much better off, health-wise, than our last cruise in Europe, because of the time of year and temperature; the weather this time has been perfect for me,  last time it was just too hot, and there were fewer people too, so it was a win, win.

The heat in the ports during our last cruise made me miserable most days and I was unable to do little more than visit the port, play a little bit of cards, eat and sleep. This time I was able to do all of the tours, kinda' keep up with everyone and even enjoy the ship and the shows. I highly recommend traveling to Europe before the heat of the summer sets in.