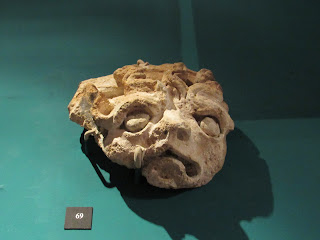 Still hacking, but none worse for the wear! Slept alright and after a slow start, we headed out, about three, this afternoon. We had no real agenda, so we decided to walk along the tree-lined walkway behind our apartment towards the Budapest History Museum. It was a lovely walk and the sun even poked its' head out for a few minutes. 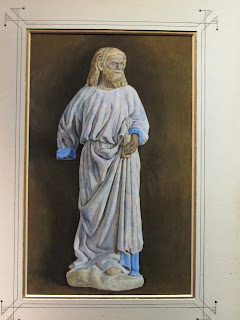 Despite the small amount of sunshine, there were also raindrops starting to fall, so we decided to head into the museum and check it out. Since we were not charged, we felt as though we did not have to spend tons of time inside the museum if the weather was to turn nice again. 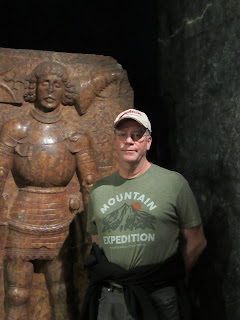 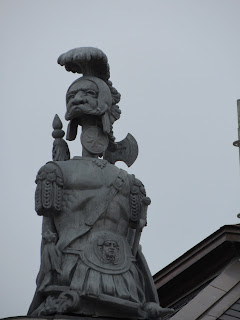 There were many exhibits of life in Budapest from present day, back to Roman times. The relics were fascinating and we really enjoy the display of silk and old shoes, guess we are kinda weird! lol 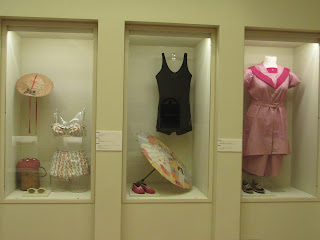 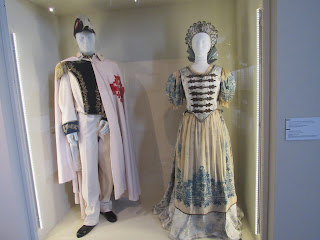 After traipsing around the museum, looking at headless and bodyless statues, our favorite being the restored "Goose Theif" we headed back outside and down towards the Danube.

We went round and round and down and down and eventually found ourselves out of the castle and on the street below. The Chain Bridge and the Danube were right in front of us, just begging us to cross them! 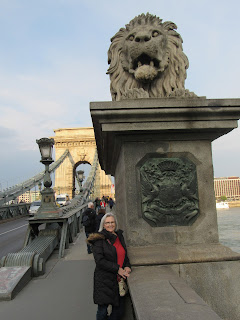 Once on the other side, the Pest side, we headed towards St. Stephens Basilica, not knowing whether or not it would be open, as it was nearly six o'clock. Silly me! It is Palm Sunday and there was a mass going on! We arrived just in time to hear the end of mass, hear some singing and enjoy the inner beauty.

Apparently, the right hand of Stephen, the first king of Hungary is on display somewhere in that church. I guess that part of the church was off limits this evening, as we did not see a bloody hand! The interior was, as expected, different than any others we have seen. It was quite lovely, and I think that I prefer the more stenciled look as an overall, to the painted scenes that are in so many European churches; pattern and real-life scenes are more balanced to my brain. 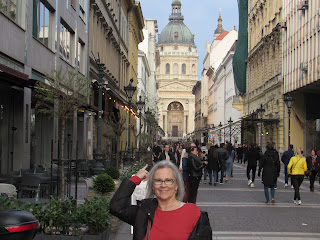 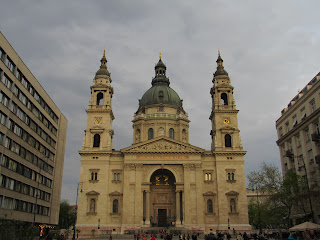 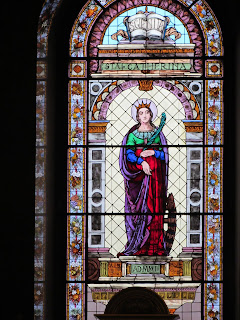 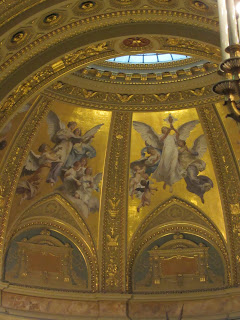 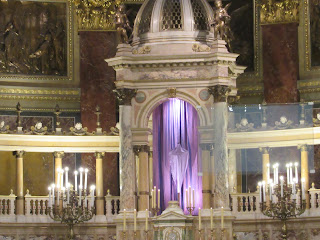 After leaving the church, we started walking towards the Parliament building and ended up at Liberty Square; there was a wicked cool water feature that was shooting water up from the ground and when you approached the water, it would stop and allow you to pass into the inner circle, so that you were surrounded by water. Very Cool! 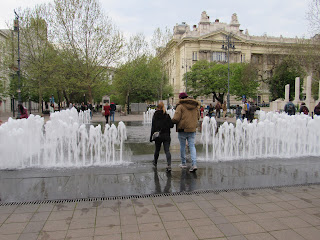 Once we got back to our apartment, we realized that one of the buildings was the American Embassy and that there is a monument of Ronald Regan right there too. We walked right by them both, and did not even see them! Bahahaha

After that, I was about DONE! And we were still in Pest, the wrong side of the river for a bath and sleep, and we were hungry, as it was nearly 7 pm. On the way to the church, I had noticed a restaurant that said that they had fresh vegetables, which we have not had a lot of since being in Europe. 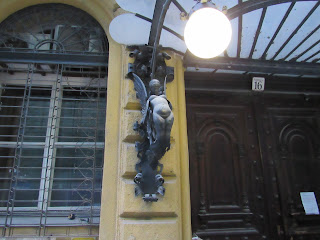 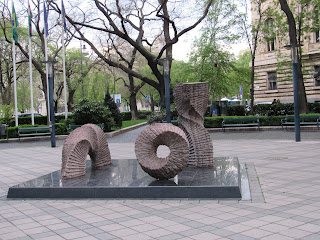 We have had our fair share of salads, and some veggies, but the place was calling my name, so we headed back that way, and found the restaurant. It is appropriately called Traktor! lol And yes, they have a tractor inside the dining room. 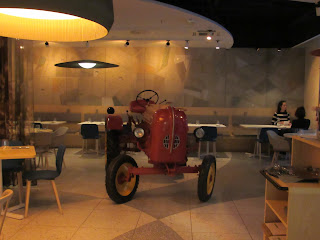 Once I sat down....ahhhhhhh.....and looked at the menu, I started smiling! They have asparagus!!!

Yay! I choose a starter to share with Joe, which was so delicious that I want to go and eat it again!
It was a cold "salad" of sweet potato wedges, over red rice, with spinach leaves and pecan with just a little bit of dressing! It was so GOOD! I never would have thought about putting those ingredients together, but YUM! You can bet I will be trying to duplicate that back at home! 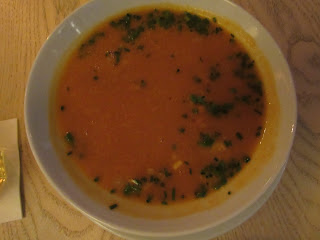 Joe had some sort of "red-orange" potato soup which was yum, too. For dinner, we both had grilled chicken, and I had asparagus, both green and white, with a lite sauce and quinoa, and Joe had risotto and mushrooms, with some sort of cheese on top. 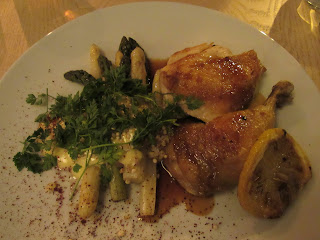 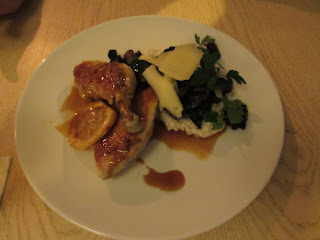 I am mostly describing these dishes to make you hungry....kidding....lol, I really just want to try and make them at home, and maybe this way, I will remember them! The dessert was great, too' whatever it was!

Fortunately, we knew that Bus 16, just around the corner, would take us back up into the castle. Once we arrived at the stop, we only had to wait four minutes, but the lights on the bridge were calling my name, and I knew that there was also another stop on the other side of the bridge. 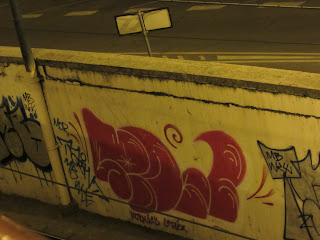 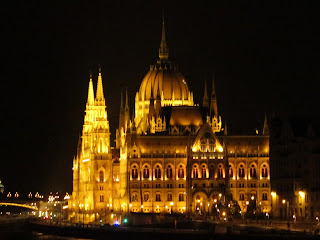 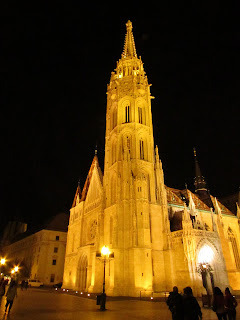 So, we walked across the bridge, and the views, with all of the lights on all of the fancy buildings, were worth the walk! It really was breathtaking, and I am glad I made the effort. We crossed the bridge, walked over to the bus stop and along came the bus! 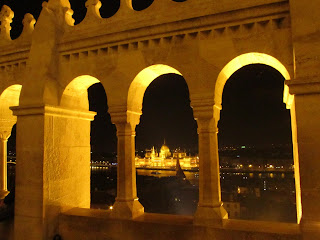 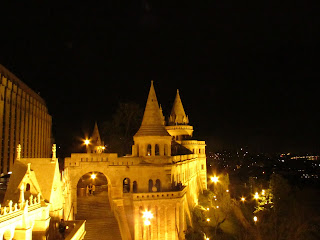 We hopped on, with no tickets; Joe went and asked the bus driver about tickets and he waved him away. One free ride to the top of the hill, where we walked, one more time to the Fisherman's Bastion, walked up on the top wall, and then headed home.