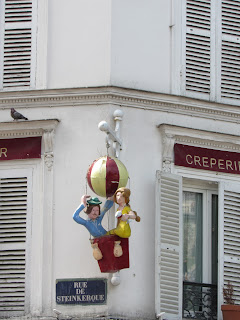 The breakfast fairy made his return with quiche Lorraine, almond croissants (my favorite) and plain mini croissants! I LOVE FRANCE! I don't know what it is, but best pastries EVER!

Somehow we managed to get out the door by 1:00pm, which may be a record. I guess maybe I was excited, after all, it is Easter, and I am in Paris! We shall see how long I last.

We weren't entirely sure what the day would bring, but we knew we had to see the Eiffel Tower which meant a Metro ride. On our way through the throngs of tourists to the Metro, we stopped momentarily at what I thought was a man doing a magic trick but was actually swindling people out of money.

He had three cups and one ball and he would swirl them around and someone would pick a cup and it would be empty. Of course, they were "betting" they were right, and I am talking like betting 50 euro!!!! And then he would swirl the other two cups and goad a tourist into picking one of the remaining two cups.; with the "crowd" chanting "Bravo, Bravo!" 50/50 chance, right?


I saw him literally swindle 100 euro out of this poor guy; it sucked and I was so pissed! One hundred euro! I was just shocked and we saw it over and over and over. The guy always had two women who would "win" every now and then, but I am sure they were plants and they all shared the money at the end of the day. This was something I have not seen in all of my travels, thus far and it was shitty.
It really bothered me and I wanted to tell the unsuspecting people that it was a scam. I will be doing that tomorrow, given the opportunity. 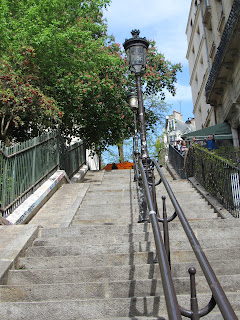 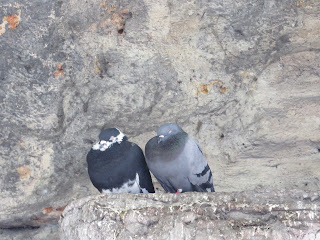 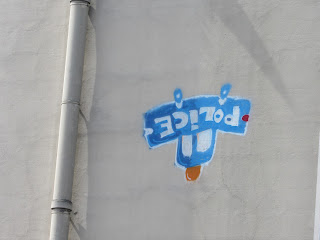 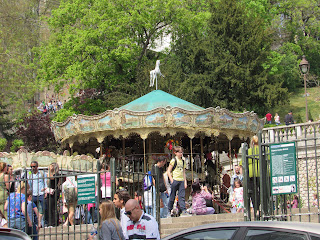 Finally, we reached the Metro, and hopped on and then off at Arc de Triumph, which is so much larger when standing next to it, as opposed to driving past. After a few quick photos, we headed over to the Eiffel Tower, which of course is fabulous and crowded! After walking over to the Eiffel Tower, and marveling in its' splendor, we quickly realized how hot it was, and how hot it was going to get, and decided to head out to the Catacombs, as we knew it would be cool underground. 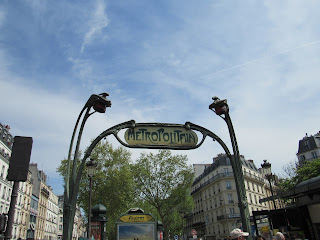 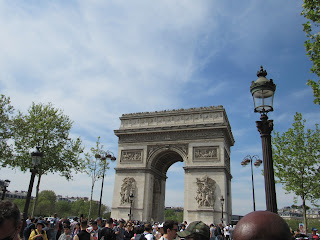 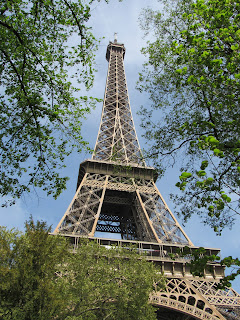 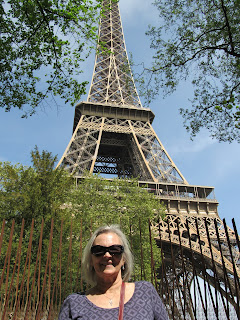 Kind of a weird thing to do on Easter, but I was quickly reminded how my body no longer tolerates the heat and the thought of being out of the sun won.

A hop, skip and a jump and we were at the Catacombs, with a line, in the sun, around the building. I just followed it all of the way to the front, to see whether or not they had a handicap line, as I knew there was no way that I would be able to stand out in the heat for the length of time that it would take to reach the entrance. (probably several hours) 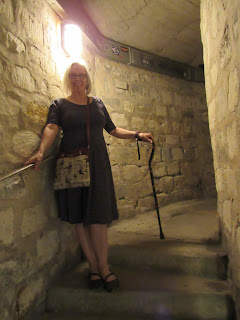 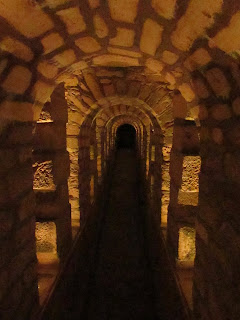 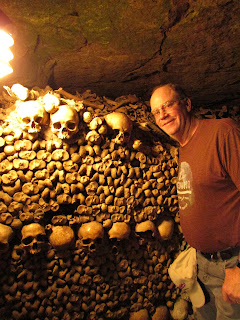 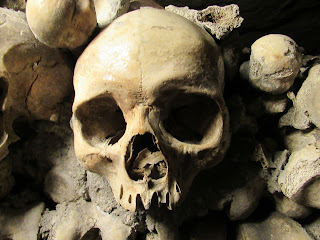 As luck would have it, there were que monitors right at the front of the line. I said, "Pardon, do you have a handicap entrance?" He told me to wait right there for five minutes and then he let us in. After going through security, we were granted two free passes, with the warning that I had to go down a lot of stairs, and then back up!

I assured them that I could although I was very slow! They told me that was alright, and we proceeded down the spiral staircase, and into the bowels of underground Paris. The amount of underground area is enormous, and there were tunnels everywhere; like in Budapest, although I do not believe that Budapest has more than two million skeletons stacked on top of one another the way they do here.

It truly was hard to wrap my mind around the entire experience and then trying to wrap it around the logistics of moving all of those skeletons from cemeteries to the underground tunnels.

I so appreciated the effort that some of the skeletal stackers actually tried to create a sort of monument to the dead by creating a heart and a cross out of the skulls. Most of the skulls were in lines, with the large leg bones neatly stacked with the smaller body parts such as the fingers and toes, and jaw bones and pelvises were thrown above or behind the wall of skulls and bones. 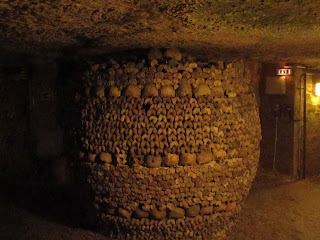 It was a rather dismal experience, yet I am glad that we made the effort to pay our respects to all buried there.

Since we were in the neighborhood of the place where we stayed the last time we were in Paris, we decided to go to one of our favorite restaurants for dinner. Our first pick was closed for the holiday and wouldn't be back until the 26th, so we went to our second favorite place, an Italian restaurant; luckily they were open and we were their first customers of the evening, as it was only 7 pm! lol 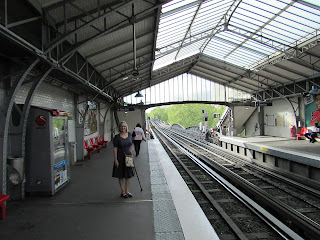 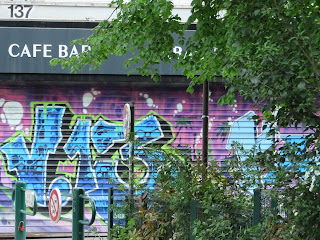 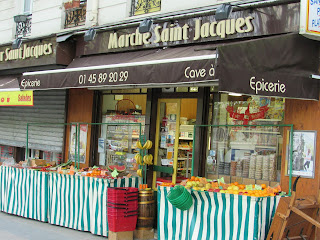 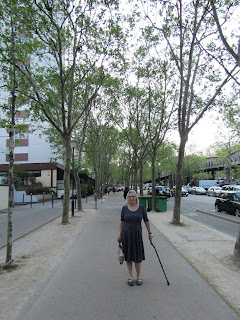 Of course, the first thing they brought us was olives, which Joe loves, and I still do not like (I tried them again!) and then they brought the BREAD and BUTTER! What the heck? How can bread and butter be so damn good? I could not help myself and I ate three pieces of the baguette and I wanted to literally lick the butter packet (I didn't); I just do not understand why their bread and butter is so much better than anywhere else on the planet. And trust me, we have eaten bread and butter in MANY countries!

Ok enough!! I also had lasagna and salad, and Joe had swordfish and pasta. By the time I got to my lasagna, most of it came home with me as I was already stuffed! Everything was just as good as we remembered and we enjoyed the quiet of the neighborhood, away from the hustle and bustle. 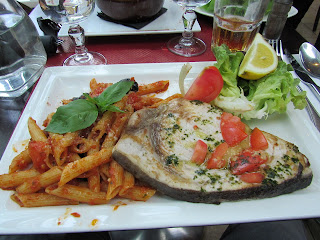 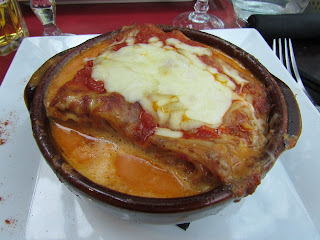 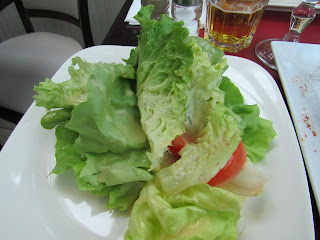 We did muster up enough energy to walk up to Sacre Coeur and watch the Eiffel Tower twinkle in the distance, which was still magical. I just love the twinkling Eiffel Tower. We also took advantage of the Sacre Coeur having no line and went in to see if the dome area of the altar was lit up or not; it was, so that was an added bonus. 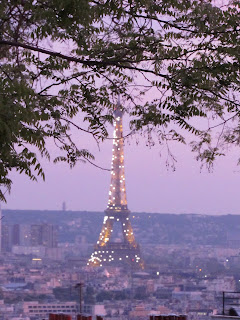 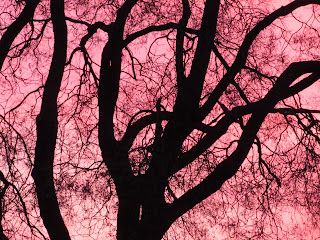 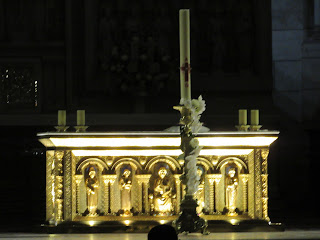 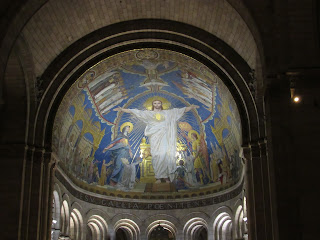 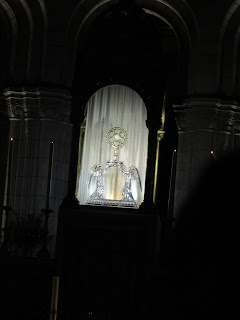 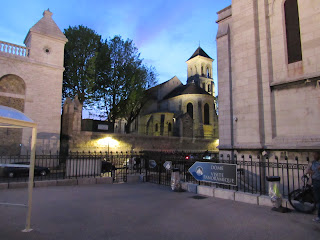 The views over the city and the sunset were spectacular, and it is now time to collapse.

I hope everyone had a fabulous Easter.

May God Bless, and Goodnight.