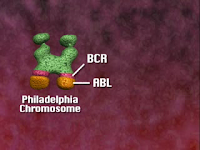 The break on chromosome 9 involves a gene called Abl and the break on chromosome 22 involves a gene called Bcr. The Bcr and Abl genes combine to make the CML causing gene called the Bcr-Abl gene. There doesn’t seem to be any rhyme or reason as to why this occurs; it just does. This Bcr-Abl gene produces a dysfunctional protein called “BCR-ABL tyrosine kinase”; this leads to the abnormal regulation of cell growth and survival and is responsible for CML. Think of it as a faucet that is constantly in the on position. It is on and making immature white cells that are crowding out the good white cells as well as the red cells and platelets.
Posted by Michele at 4:26 PM 6 comments: