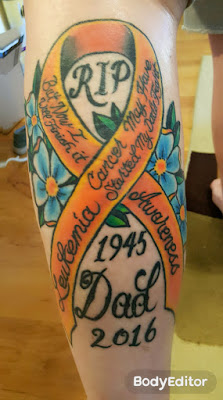 Every 3 minutes someone gets handed a diagnosis of a blood cancer and every 9 minutes a blood cancer steals someone’s life. Unfortunately, my father was a statistic to both.

In January of 2016, my dad developed what we initially thought to be allergies which turned into a sinus infection. We really didn’t think much of it since he had sinus infections frequently. It wasn’t until it had lasted so long, that we grew concerned. He had been to see his family practice doctor on 4 separate occasions where he was just given antibiotics each time.

I remember a specific day in April of 2016 when I had driven my father to an appointment for a second opinion. Yes, he was still sick, but even sicker. We were having a conversation on the drive home about what that doctor thought and for some reason, an ill at ease feeling coursed throughout my body.

I blurted out, “They don’t think it’s cancer, do they, Dad?”

“No, no it definitely isn’t,” he assured me.

My ill feeling never left me. I knew it was the dreadful C word. I just knew.
As the days continued, my father was sleeping a ton and had begun experiencing severe bouts of body pain. At this point, he was a constant visitor of the Emergency Room. He also was developing unsightly bruises all over his body.

Flash forward to May of 2016. Dad was admitted to the hospital for pain management. At this stay, an internist came in to visit him. He took a full family history, asked my dad a ton of questions and told him that he felt he needed to perform a bone marrow biopsy, as he was suspecting leukemia. Maybe hearing the fact that my father’s 2 brothers had already passed away from blood cancers was what got things moving along.

One day while my dad was still in the hospital, I was over visiting with my mom and stepdad. I was heavily involved with a project when it was interrupted by a soft knock at the door. I stopped what I was doing so I could answer the door, only to find my husband there.

“Ben, what are you doing here? Aren’t you supposed to be at work?”

“I took a break to go visit your dad in the hospital,” he replied.

His face told a story that he most likely had unpleasant news for me.
“Ben, what is it? Is anything wrong?”

He asked my mother and I to sit down. So, we did. Then with wobbling cheeks he said, “Your father was just diagnosed with leukemia."

At that moment in time, my heart sank, deeper than it ever had before.

The next 3 months that my father lived, felt like I was fighting my own war. It was as if I was supposed to be shooting my gun at the enemy, but the enemy was far to forceful. I could only stand in one place, shooting my gun in the wrong direction and each time I would try to turn again to aim at my target, I’d be pushed back in the opposite direction.

That was me wanting so badly to take away my father’s cancer.

My dad passed away on the morning of August 24th, 2016. I recall walking into his house to see him lying there in his hospice bed. I climbed up to lay beside him, kissed his cheek, grabbed hold of his hand and sobbed and sobbed.

My father was supposed to be at my first Light the Night Walk that coming October, but I can tell you he was there in spirit. He had been so proud of the work I was doing for The Leukemia and Lymphoma Society and asked me a couple of days before he died if I would continue helping other blood cancer patients and I promised my soul that I would. I am still with The LLS today.

Please help defeat the darkness of cancer. Help me to be my father’s voice. Please consider donating today so that researcher’s can finally crack down on this monster and so your father, mother, sibling, children and friends, don’t become statistics.

I was diagnosed with Chronic Myeloid Leukemia when I was 26 years old on April 1, 2003.  Every family has hereditary medical problems, but cancer is not in my family.  I was the first, and to this date, only one in my family with any type of cancer.  After 7 years on Gleevec I was able to come off chemo and since July 7, 2010 I am proud to say I am in treatment-free remission!  On my 10 year cancerversary I got my CML tattoo.  I put it on the back of my neck to symbolize that CML is behind me, but always with me. 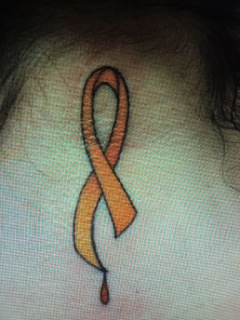