Thanks for the reminder, Lyn; "Even wonder woman needs to rest!" lol 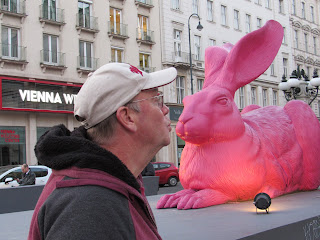 Despite a good night's sleep; almost eight hours, there was nothing that I could do to convince my body to get out of bed and get dressed. By the time I had woken up, Joe was gone, in search of breakfast to bring back to the room. Talk about room service!

He arrived back to our room just as I was starting to wake up. He found a lovely yogurt with muesli and fruit, and several different types of pastries. I particularly like the one that had a poppy seed filling.

After we ate a leisurely breakfast in bed, I STILL could not move! I remained in bed, resting until about 3:30, and because this was our last full day in Vienna, I forced myself to get dressed and get outside.

By this time, it was time for lunch and we ate a vegan place that we had passed by, last night. Oddly enough, our diet, since we left home, has been missing vegetables, which is typically my "go to" in a meal, so I thought that this would be a good choice. 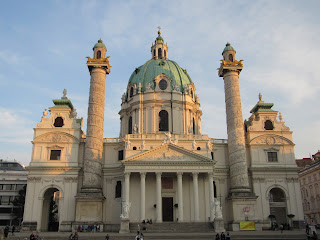 The food was delicious! I had some sort of pumpkin thing with potato balls on top of it and Joe had potatoes in an orange sauce (turmeric, we think), a leek and celery lasagna like thing, and our favorite was the cabbage/pasta Austrian dish, which is called Krautflecker. We also had a vegan "gravy" that was great on everything. The shop had fresh herbs growing everywhere and encouraged us to go and pick whatever we would like, to add to our dishes. The only problem with the meal was that I ate WAY too much!

After lunch/dinner, we headed out on our daily adventure. We ended up at St. Michael's Church which was pretty close to our hotel, and we had been by many times. It was an understated church if you were to compare to others we have seen, but beautiful nonetheless. It had many of the original works of art still on the walls, they were faded and in many places, they had completely disappeared.
Seeing the before certainly makes you appreciate the after.

After leaving St. Michael's we headed toward the "fancy" district of Vienna and ran across yet another church; St. Peter's. I loved the old bronze dome and we quickly went inside. There was actually mass going with a few tourists standing in the back. It was right at the end of mass, as I went to the Catholic church when I was a child and recognized what was going on,  I stayed and listened till the very end. 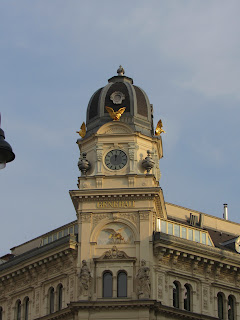 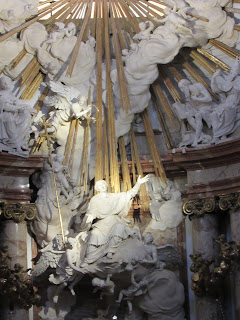 As far as churches go, this was possibly the gaudiest one that we have been in, there was so much gilded gold that my eyes did not know where to look! They too had a banner over the cross at the front of the altar and by this time,  we are figuring that it must have something to do with lent. We may go back tomorrow for a quick "tourist tour." 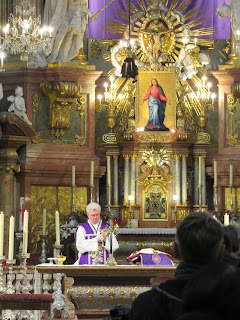 After St. Peter's, we headed over to Vienna's most iconic church, it has been the most important church in Austria since it's construction. It has the tallest church tower in Austria. It has a gothic romanesque feel and was also getting ready to hold mass, which makes us wonder if they literally have masses every single day, all year long or if it is because of Lent. 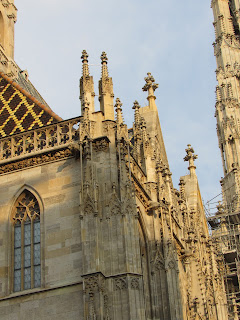 These churches were literally a block apart and both were holding two masses; today is Wednesday.
Anyway, along with the typical statues, crosses, and monuments there were stones, hanging from the ceiling. It was Peter Baldinger's Sky of Stones, representing the stoning of the martyr Stephen, from what I can gather and Jesus being the cornerstone for humanity It was interesting if nothing else. 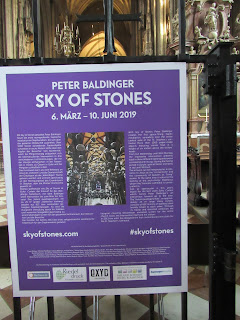 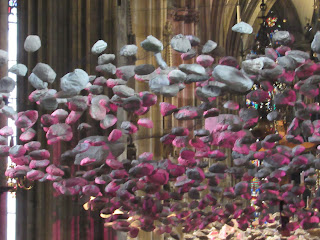 This church, like so many others, was surrounded by scaffolding where they were washing the church to remove the black, soot-like filth from the exterior. The roof tiles were colorful and created an intricate herringbone pattern. Hopefully, we will be able to return again tomorrow, before we leave, when there is no mass in session.

Walking through the streets I marveled at all of the sites; we saw musicians of all types, but my favorite was the accordion player, we saw graffiti, dogs of all shapes and sizes and fabulous window displays. We learned that the Farmacia in Vienna is an Apotheke and that even the smallest business is located in a huge building, we also learned that TGI Friday's has made its' way to Vienna. 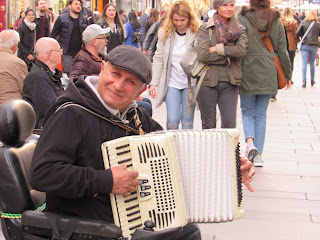 Continuing onward we headed toward what we thought was the Opera House. We were wrong! It was another church, which was about to begin mass. We were allowed a five-minute look/see and we were grateful for that because it was quite the schlep to get there!

Once inside, the most obvious thing in the church was these two HUGE mirrored globes hanging from the ceiling. I haven't a clue why there where there, or what they represented, but they were different than anything else we had seen, hanging in a church; maybe not as strange as the hanging rocks, but strange nonetheless.

There was a beautiful fountain out in front of the church and a big old dog plopped right down in it. Cracked me up! 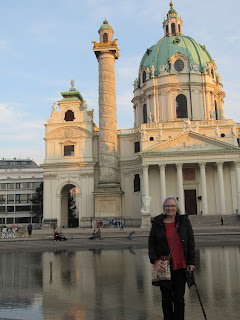 Since we had not found the Opera House, and it was along our route back to the hotel, we wandered in the direction that we thought that it was and we found it not far from the church. I have to admit that the Opera House was pretty cool, but I liked the church better.

I am not sure which district we were in, but for some reason or another there were bunnies here and there; Easter maybe? 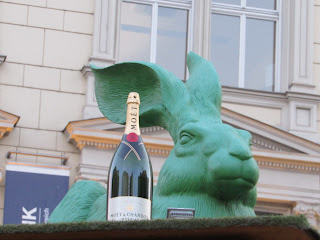 By now I am dragging, and not a tiny bit hungry, but I must eat in order to get that next dose of medication down the hatch, so we meander through the streets, find another Bratwurst stand and grab a dog. Not as good as the first one, but still pretty darn great! And I do not normally eat hotdogs, sausage or bratwurst.

I loved walking the street back to the hotel because so many of the shops were closed and I could photograph their windows without feeling guilty! There were hats, and bunnies and suckers and chocolate, and dresses and Steiff bears, unique earrings and figures of all shapes and sizes. 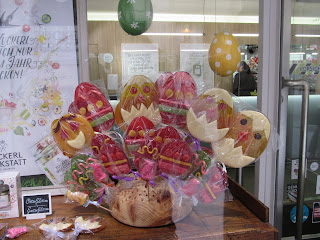 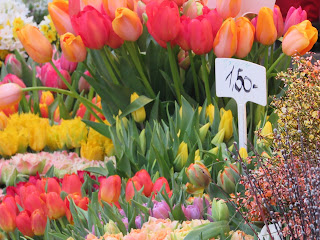 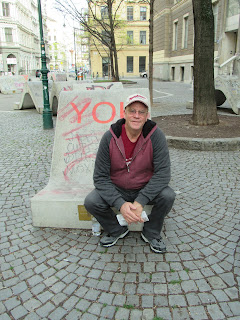 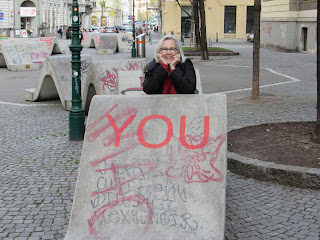 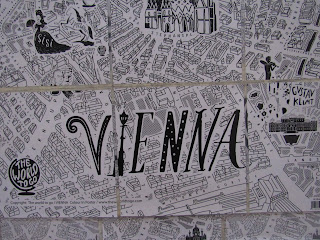 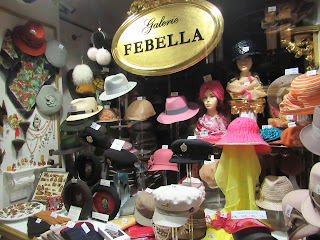 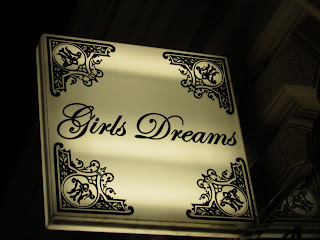 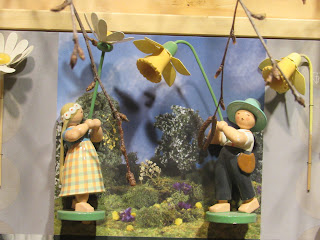 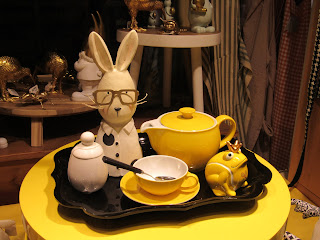 Not a bad day for a girl who didn't get out of bed until four in the afternoon!

So much to do, so much to see; it is a big world out there Dorothy!!!