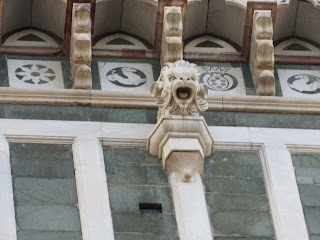 Well, our room may be fabulous, but their internet is not! After many hours, I finally was able to get some of my "stories" posted. Today has been better, as I found that if I sit in the hallway, which is like a small sitting area, the internet is much better. I met people from Germany, Colorado, Portugal, and Spain while sitting in my jammies!

Today we got a bit of a late start, but since I am only good for about 5 hours that is alright with me! Before leaving our room we had a great "breakfast" of goodies that we bought at the market last night. Some sort of cheese with a honey, pistachio crust, a baguette and some type of thinly sliced meat; it was was delicious! We also had cannolis, and I had a yogurt, milk, and Bosulif.

We headed out with the intent of seeing "David", but of course we got totally distracted and ended up in a square with the Basilica San Marco along one side, and a bunch of school kids singing on the other. It was closed, but we will head back and try and catch it tomorrow. 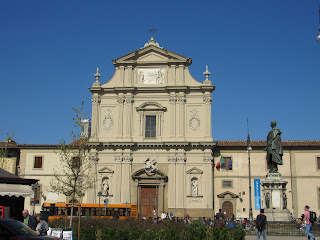 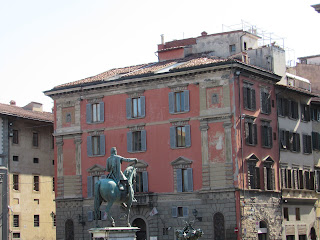 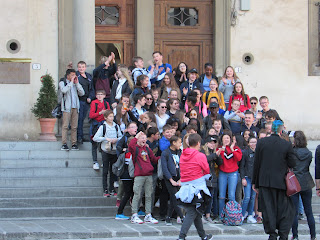 After leaving the Basilica, we ended up at another Basilica, the S.S. Annunziata, which was a little confusing as it seemed to be a museum of artwork, of small children??

Eventually, we found the Accademia Gallery to see "David". Of course, there was a REALLY long queue, so I meandered to the front of the line where there was a queue monitor. I asked him if they had a handicap entrance, and he opened the line up and let us in. Apparently, with a cane, you do not even need to explain that you have leukemia and a limited amount of energy, etc. 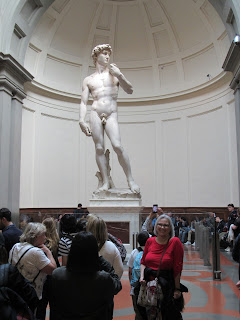 Once in the main area, I tried to walk past the ticket taker; he promptly sent me to the ticket booth. We said two "prego" and then I looked at the sign and it said, "no charge" for disabilities. I asked him if that was the case and he said "Yes, did I have a card? "

I handed him my medicare card, and he gave us our money back in euros, which was awesome, as we don't have tons of euros because the exchange rate is better with our no transaction fee, credit card.

That being complete, we walked back to the ticket man and proceeded to see "David", who I believe has been seen in books and movies by many of us, but I must say he was so much larger than I thought and the detail in the sculpture truly is amazing. The muscles, the veins in his arms and the rest of his entire body were depicted perfectly.

They say that he is the most accurate, to scale sculpture of all time. I would agree with that except for his right hand which seemed a bit large, in my opinion.

We walked around the rest of the museum and saw many different models and casts from many artists, as well as many other paintings, too. It was quite warm in there, which brought on nausea, so we were unable to stay too long, but I am grateful to have seen what I did. 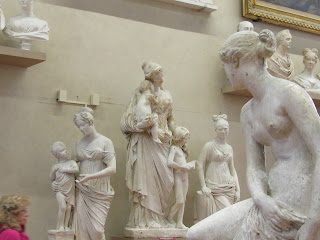 After a Zofran and some Tylenol, we headed back towards our room, and gratefully the meds kicked in so we decided to go to Florence's Duomo, which is possibly the most celebrated Cathedral in the world; it is considered the "Jewel of the City".

It had two lines wrapped around the entire thing! Since I have learned how accommodating Europeans are to "challenged" people, I went to the front of the Duomo and asked the queue monitor if they had a disabled entrance. He said, "Of course" and pointed around towards the back.

We walked to the back, which gave us a different, amazing perspective of the cathedral and saw the exit door. There were two dudes standing there and we asked where the handicap entrance was, they said right there and let us in,  through the out door! While it was quite beautiful inside the Duomo, it paled in comparison to the outside, but it had the most beautiful offertory candle arrangement I had ever seen. We did not stay long, nor did we venture to the dome, but I am thrilled to have witnessed such greatness. 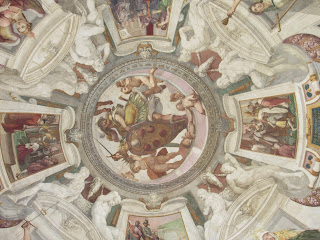 Since the daggone nausea was being persistent, we decided to go back to the gelato shop where they had ginger gelato. I had had some yesterday and it was so amazing that I wanted more, in hopes that it would help settle my stomach.

While we were there, we met a lovely couple from Lisbon who informed us that the Gelato shop was the number one Trip Advisor Gelato shop in Florence. We were not surprised.

By the time I relaxed a bit, and ate the gelato, I was actually up for dinner. We stopped in a little cafe' and I had yummy lasagna, and Joe had yummy tortellini; it wasn't fancy, but it was perfect.

On our way back to our room,  we ran into two guys singing near the carousel, and some artists doing chalk art, in the street. Ironically, I had just told Cindy about the book, "The Girl with the Pearl Earring" and there
was a chalk, street artist drawing her! It was AWESOME!!


Sometimes I just love being me! The coincidences in my life amuse me.

After leaving that little party we arrived at our street where our own guitarist was already playing and singing. We went up to our room, opened our window and I put on my jammies. Listening to him sing is just the greatest way to end the day. Crowds kept forming and at one point a gal from the audience started to sing while he played, and others started to dance in the street. 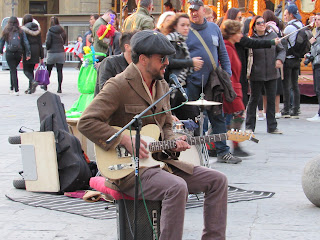 Does life get any better than this??

If you haven't traveled to Europe, I encourage you to do so; my words cannot even begin to describe the magic!!!