PRAGUE! I do not even know where to begin as there is just so much to see and everything is breathtaking. The skyline, the architecture, the bridges, the river, the people the cafes and even the dogs!

We had no agenda and actually left the apartment around one, which is really early for us. Our first stop was a Chimney Cakeshop. There are chimney cakes being baked over open flames everywhere you look, and they smell so good.

I tried a classic, the chimney rolled in cinnamon sugar, and Joe had chocolate spread inside of his. I thought that it tasted a bit like cinnamon toast, without the butter; good, but not as good as I had anticipated. I wonder how many people have more than one; bread and ice cream just doesn't float my boat, but they smell amazing. 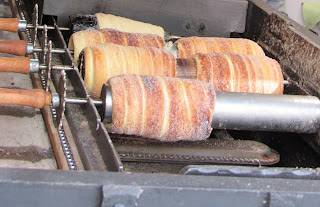 It didn't take long to find a church. St. Nicholas Church on Lesser Town, where we are staying,  is said to be one of the most beautiful buildings of Czech Baroque. Apparently, Mozart played the organ while he was here. 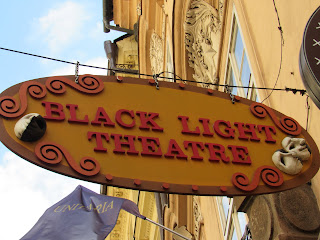 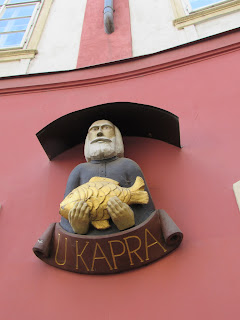 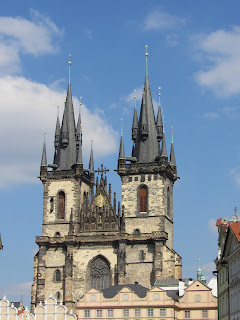 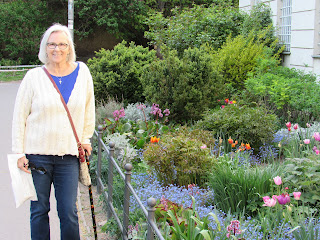 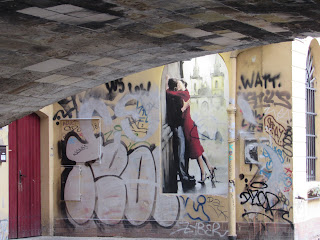 This church is filled with more "dudes" than any church I can remember seeing, and tons of faux painted marble. It also houses a set of paintings called the "Passion Cycle" which was created during 1673-74. 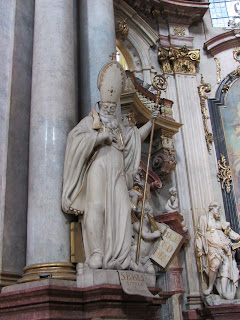 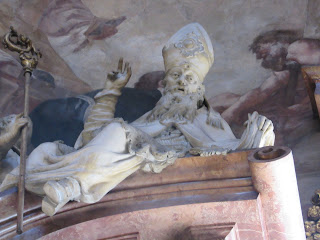 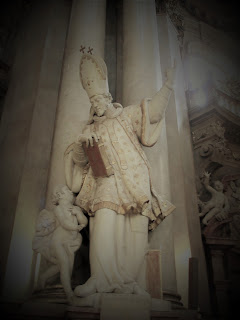 We continued onward and found ourselves on Charles Bridge. The bridge was teeming with people, vendors, artists, musicians, birds, and guys silently begging with their dogs. I am a sucker for street musicians and probably could have stayed and watched them all day long. 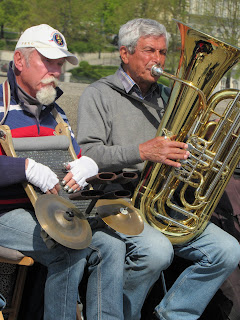 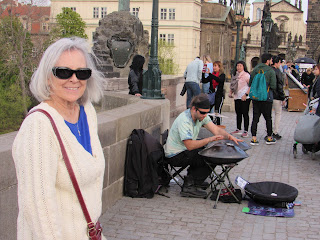 While we were on the bridge, we made sure to rub the dog, the queen and the falling man (St. Jonh Nepomuk) which folklore has it if we touch the fallen man we will return to Prague, the queen brings good luck and the dog is just cute! I didn't know it at the time, so maybe I will have to go back and make a wish. 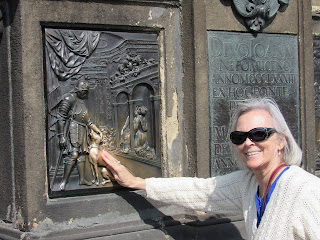 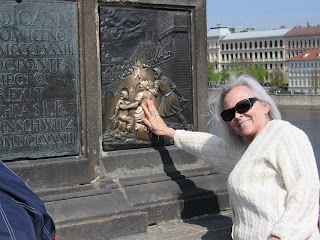 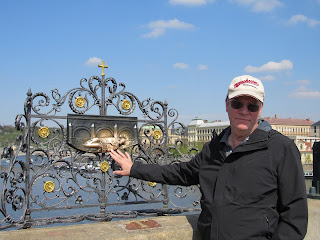 Once across the bridge, we made our way to the square to see the famous clock. This Astronomical clock is said to be the pride of Prague. It was built during the 15th century and is widely regarded as the best preserved medieval mechanical clock in the world. We watched it at the top of the hour for the big show but were disappointed that all we saw was the skeleton move. We will be going back to see if the windows open like they do on youtube! lol 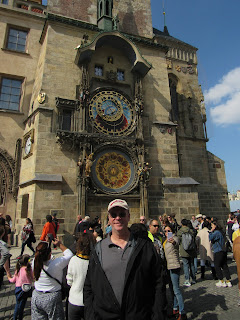 We strolled through the square enjoying the sight, sounds and smells and found ourselves at a few more churches, all worth the effort of finding the door. One of them had a HUGE round chandelier hanging over the pews and all I could think of was all of the movies where the chandelier comes down and captures all of the people down below! lol This is another St. Nicholas church of baroque style and was completed in 1737. It is now used as a classical concert hall. 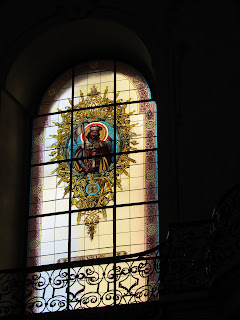 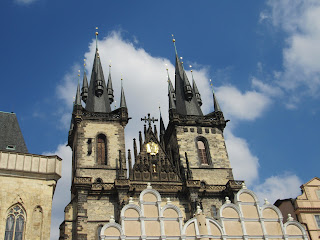 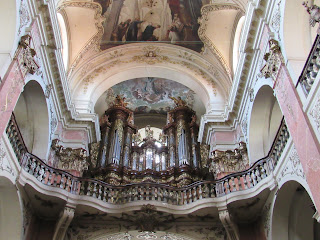 One of the churches, St. James Basilica was very, very cold and the decor was very dark. Everything from the columns and arches to the frescoes, statues, and altars were done in a dark hue. Very depressing, in my opinion, although many consider it one of the most beautiful baroque churches in Prague. The organ consists of 8277 pipes and is the most impressive features of the Basilica.

I was amazed at how many statues with spears, were standing over people, serpents, and dragons getting ready to impale them; the perfect place for gore. In the church, right?
AMEN! 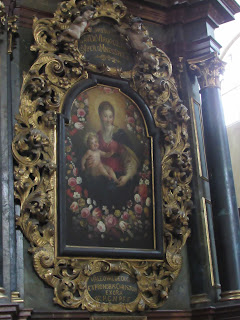 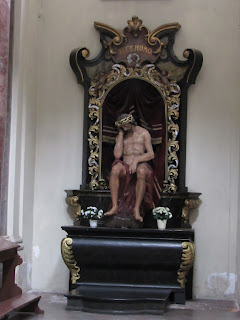 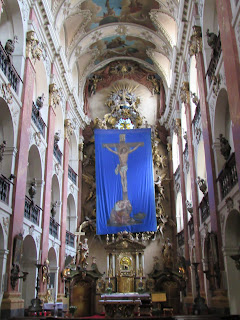 By this time my dogs were barking and I was getting more tired with each step and we still had to make it back to Lesser Town. Along the way, I managed to stop and look at two Marionette Shops which displayed the work of over 40 Czech puppet makers. They are truly a work of art and I wished that I could bring every single one of them home. 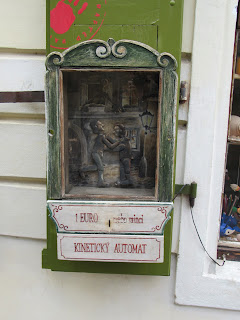 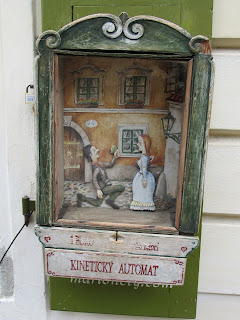 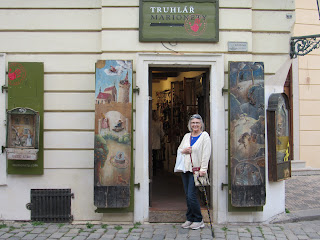 The art of puppetry has always fascinated me, and it makes me want to go home and start building them!

Eventually, we got close to "home" and found a restaurant to have dinner. We could not pass up the pickled cheese, which was different than last night's cheese, but just as good, and on top of that, I ordered gnocchi with cabbage and bacon; delicious, and Joe ordered BBQ ribs with potato wedges and sauerkraut; purple and white. 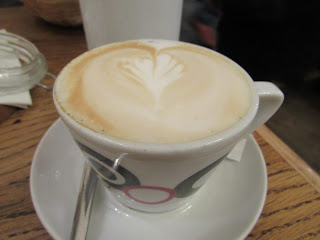 My niece is going to be so proud of me as I have turned into a foodie! Bahahahha!

With our leftovers in a bag, and not in a bin, we headed back to trek up the stairs; it is only 7pm! Talk about wimps; I have not moved off this bed since my hot bath, but look at my view! 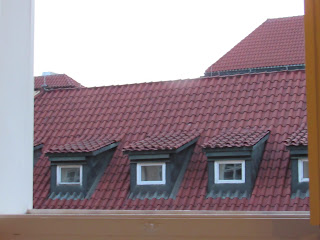