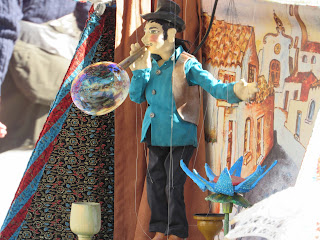 One of the coolest things about our room, here in Florence, is the floor to ceiling black-out drapes! They keep our room nice and dark so I can sleep! I don't know what it is, but I really do not "sleep" until about six in the morning. Doesn't really matter what time I go to bed, I just do not sleep, until I am flat out exhausted from not sleeping, until then. I am then able to sleep until about ten.

The other cool thing is that when I finally did wake up, I woke up to two guys playing violins, and one playing the guitar, right outside of our window; I just could not stop smiling!! Music outside my window makes me happy!

That being said, once I was awake, it took me until about 2:30 pm to get out the door, which for us is just fine as I am only good for a maximum of five hours, and that is pushing it!

Once we headed outside, we walked to the Basilica Saint Lorenzo and Medici Chapel, which was not very fancy on the outside but was full of really cool arches and paintings of people I did not know between the arches. Apparently, Michelangelo was commissioned to reconstruct and adorn the facade of this Bascillica with sculptures, but his financially strapped patrons canceled the project; it still stands unfinished today.


Not far from the Basilica is the Battistero di San Giovanni (the Baptistery) which has had a line around it every single day that we have been here. We picked up complimentary (handicap) tickets yesterday and were told we could skip the line, but I really didn't feel like struggling through the crowds, so we thought we would wait and see if today it would be better, which it was! No line, at all, we walked right in. It is definitely worth seeing. I loved the dark hues of the paintings and the warm cozy feel of a rather opulent building.


After leaving the Baptistery we were getting a bit hungry, so we thought that we would see if we could find a small, hole in the wall sandwich place that we saw yesterday, that literally had a pig in the window and one on the chopping block! 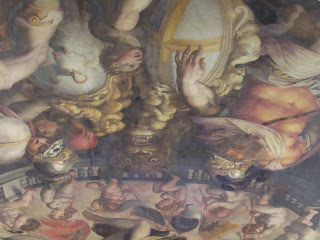 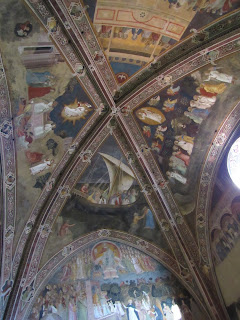 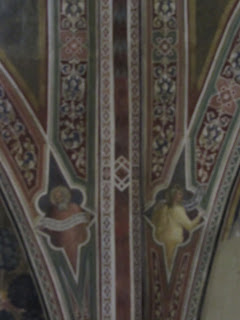 While we were looking for the pig, we stumbled across the Museo Di Orsan Michele! Of course, we had to go inside. It was absolutely stunning! I swear I can hardly believe just how different one Bascillica is from another, and how you can never tell what you are going to see on the inside, based on the outside. They called this one a Museo, but it was a church; cross and all. 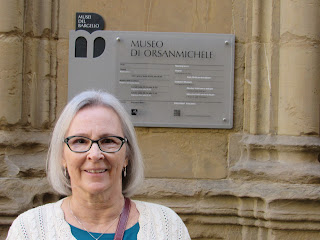 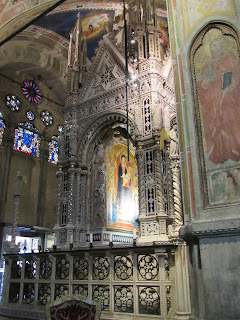 With rumbling tummies, we promised each other no more "squirrels" (distractions) until after we had eaten. Fortunately, Joe has a really great sense of direction and actually found the little sandwich place within a few blocks. We each ordered a different sandwich, and they were both delicious! 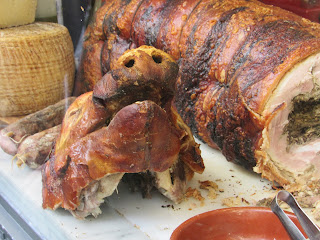 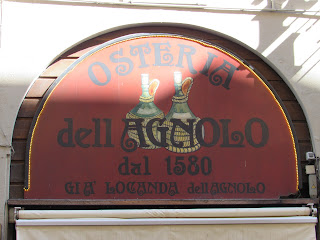 After we ate, we continued on toward the Bascillica S. M. Novella. Along the way, we came across a puppet show; right in the middle of a square. The puppeteer was wonderful! She was creative, entertaining and interactive. Her puppet with the hat, that blew bubbles was my absolute favorite. I do not know how she moved so many different strings to make this little guy come to life!

Oh, the things you see in Florence.

After the puppet show, we continued on our journey and eventually arrived at the Basilica Santa Maria Novella, which was situated in another square, with more entertainment, statues and even a guy asleep on the lawn, who incidentally awoke while we were inside, and left his hat behind! 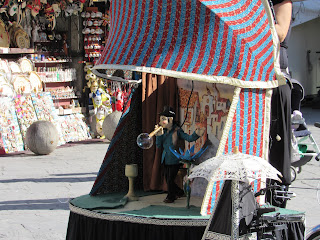 The Santa Maria Novella was another beautiful church which was certainly undergoing restoration but had also been restored in many areas. The stained glass was remarkable, as were the paintings and sculptures.

One of my favorite things was a 3-D scene with the Mother Mary and Joseph looking down at baby Jesus in a manger. It was life-sized and simple which is refreshing in the overabundance of opulence.
There was also a very strange Jesus on a huge cross with a skeleton peeking out of the depicted grass at the bottom of the cross: weird. 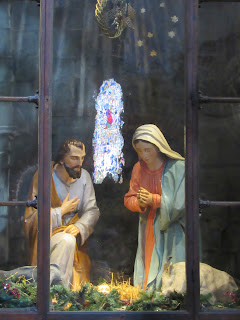 There was room after room of total opulence and the funniest bathroom that I have encountered; the signs explaining how to flush the toilet was hysterical! 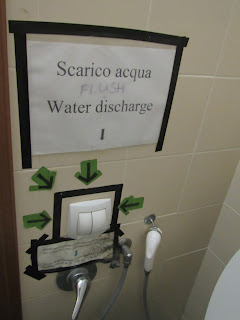 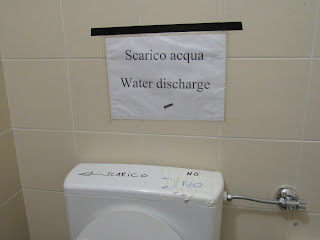 After that, it was Gelato time! One of my favorite parts of the day. The ginger gelato warrants walking across the river just to be able to enjoy the ginger flavor while I can. It truly is amazing and helps with a tender tummy. Today Joe noticed the sign across the street "USHAMAMMA" which cracked me up! "Who's Ya Mamma?" hahaha 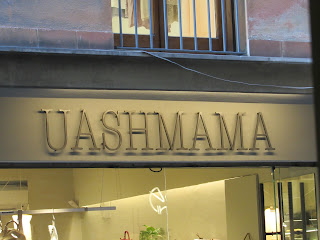 Feeling a tiny bit refreshed, we headed to the Palazzo Vecchio which is the most important administrative building in Florence. It was built in 1299 and was inhabited by the Medici family and others for many years. The thing is HUGE and FANCY. I cannot even envision living in something like that, you wouldn't run into family members for weeks if you didn't want to. 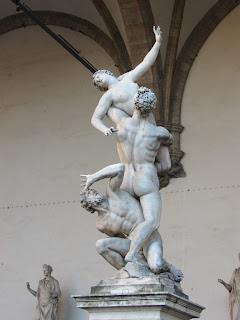 They had a convention going on in the main floor area which was alright by me because I was already whooped, but I am glad that I pushed through because the artwork, marble, and woodwork were worth the effort.

My favorite room was the map room, which also had a gigantic globe situated in the middle of the room. We were also given complimentary tickets to this venue as well, so if you go to Europe and have any type of disability card, I use my Medicare card, you and one carer will be allowed to enter at no charge, and no wait. It truly is a blessing. 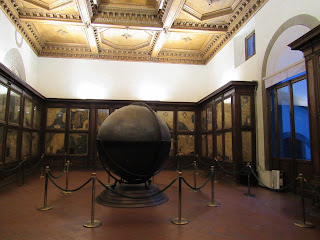 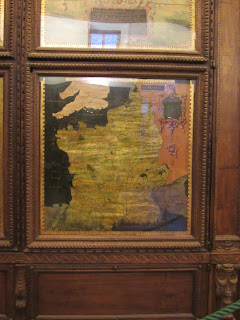 After that jaunt, I literally drug myself to dinner; we opted for quick and simple and went to the same cafe we went to last night for pasta. I didn't want to get up when I was finished I was SO tired, but our room was just around the corner.

We almost made it till 8:00 pm tonight, we are such the party animals! I have not moved off of the bed since we got into the room. I may not make it out into the big, wide world of Florence until after 3:00 pm tomorrow.