Another slow start for this old gal! Managed to get a few loads of laundry done, caught up on writing and posting, and relaxed most of the day.

Joe, the breakfast fairy went and got breakfast, and some more orange juice, as my throat is seriously threatening to get "sore", and my body is trying really hard to catch Joe's cold; darn it!

By late afternoon, I got ambitious enough to venture out so we could explore a little and get a bite to eat. We decided to go to the "happening" square for lunch, which was not a great idea today, as it was PACKED!

There was some sort of march/demonstration going on with a whole bunch of men, flags, and several police vans following the parade. A little further down the street, there was another huge group of people, singing and dancing and throwing color bombs of powder into the air; they were all covered in color: again, we have no idea what was going on! 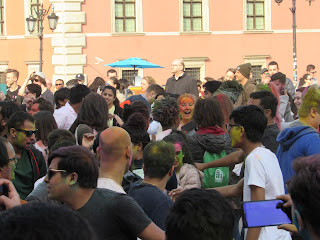 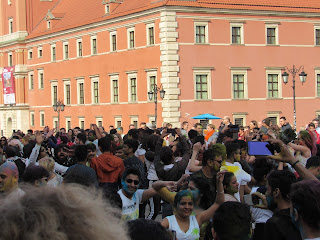 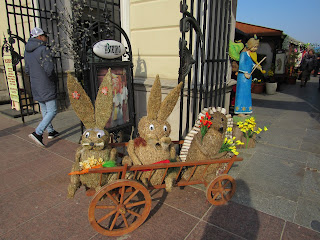 Then there was a group of young kids break dancing in the street, a bubble blower and a balloon seller. We decided to retreat back into our quite neck of the woods, to find a nice quiet place to eat! 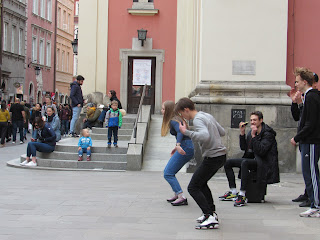 Once again we found an AWESOME place; the food in Poland is amazing and cheap! We shared a salad with red beets and truffle oil, Joe had perogies and I had what they called a pancake. It was SO good! At home, we call my pancake a crepe. It was filled with spinach, cherry tomatoes, and some sort of cheese, sprinkled with pine nuts, on a bed of pesto!


Joe's raspberry lemonade was like no other lemonade that I have ever seen. It had a candied orange, sprinkled with powdered sugar, two sprigs of mint and a little boat of ice, filled with tiny little ball candies. I LOVED it and might just have to come back tomorrow so that I can have one of those lemonades, and try something else on the menu, too!


The presentation of all of the food we have had here in Poland is spectacular; my only wish is that I could eat more!

After lunch, we wandered around finding a few more churches to venture into, and I was surprised at how modern and strange some of them were. I liked some of the artwork if you will, but other aspects were just strange. The door handle on one of the churches was half of a face, and the tops of the doors were adorned with angel torsos; one of them with a head in his chest, which was really weird. 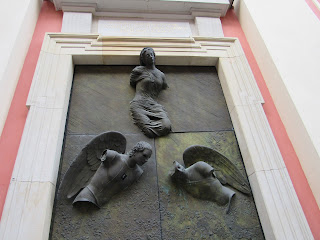 And then there was the church whose altar area was covered in hanging necklaces of some sort. I thought maybe they were rosary beads, but when I zoomed in with my new, awesome camera, they just looked like necklaces; very strange indeed. 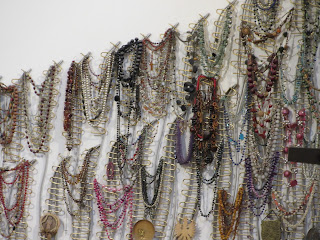 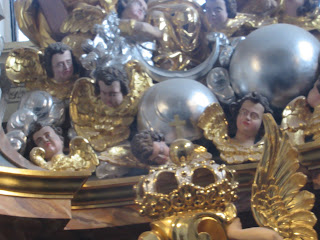 After leaving the churches, we found ourselves walking toward the Barbican and ran into a museum that depicted the destruction and restoration of Warsaw. It was interesting to see how close they actually came to replicating the pre-war city, after its' destruction; it seriously looks almost the same.


Since I was still dragging, and Bosulif started to do its' number on my intestines, we decided to have some Gelato and head back to our apartment for an early night, in hopes of a rejuvenated me, tomorrow.

I just can't seem to get a hold on my cold, my energy, and my nausea.