Not Thinking About Leukemia Today! I Went on a Mystery Trip! 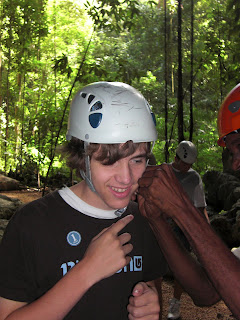 When my children were small, one of my very favorite things to do was to take them on “mystery rides.” We would literally wake them up, sometimes in the middle of the night, tell them what to pack and then load them in the car. Sometimes the mystery ride was a day trip to Magic Mountain, other times it was a weekend trip to Las Vegas to see Siegfried and Roy. We surprised them with trips to Catalina Island, San Diego and the Colorado River. Sometimes we just went to the water park or to see a play. Wherever it was, the kids never knew where we were going; it was always a surprise.
One of my very favorite mystery rides was a day trip with my youngest son and his friend. We told the kids to get in the car; we were going for a ride. We headed towards San Diego and the kids began guessing. “Oh, we are going to the Wild Animal Park.” “Nope, just passed it.” “I know! We must be going to the zoo!” Wrong again. “Oh, Sea World!”, “No, not Sea World.” “The Beach?” “ LEGOLAND?” The guesses went on and on.
Now, I must tell you that the kids were both avid Green Day fans; I had at some previous date told my son that he couldn’t go to a concert until he was at least sixteen years old. The kids were probably only about eleven at the time; so they had no idea that a concert was even a remote possibility. As we were driving to the concert, the traffic came to a complete standstill. It was then that we realized that we needed to get into that long line of cars. No one would allow us to merge, so we just kept driving; eventually we rounded a corner and exited into the shared lot for the San Diego Amphitheater and the waterpark. We were in the VIP parking lane and were ushered right up to the front lot. We figured the $20 that it would cost to park there, was well worth the money just to avoid fighting with all of the other traffic that was inching into the other lots.
Now of course my friend and I knew exactly where we were going, but the kids still hadn’t caught on. They were concerned about whether or not their bathing suits were in the car, because they thought that they had finally solved the mystery and that we were going to the waterpark. We were directed to park the car about thirty feet from the HUGE Green Day semi-truck; it was then that I heard my son say, “Huh, what a coincidence, there’s Green Day.” My girlfriend and I couldn’t stand it any longer; we cracked up and finally told them that we weren’t going to the waterpark, but that we were going to the concert. The kids came unglued! They were so excited that they could barely stand themselves. I think that they were actually stunned. 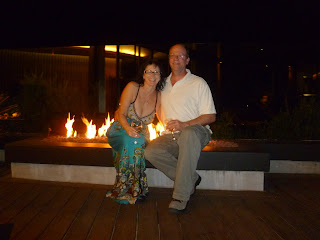 The day just got better from there. As we were walking up to the very, very long line, I heard a guy at the gate hollering out something. I asked him what he said, and I thought he said “Paid tickets, here.” Well, we had paid tickets so I walked up to the gate and stuck out my arm. He put a wrist band on it and then wrist banded the kids. They stopped my friend and looked at her ticket. They kinda’ just shrugged and wrist banded her, too. We then began the long climb up to our seats. They were quite high up in the amphitheater as we had decided last minute to take the kids to the concert. They didn’t care a bit. They were just happy to be there. They were both actually in awe, as neither one of them had ever been to a concert.
A gal climbed over all of us and sat down. Her perfume was enough to knock you out. She snottily said to me, “What are you doing here?” I replied, “These are our seats.” She said, “Well, with those wristbands that you have on, you can get much closer.” My girlfriend and I were like, hmmmm, let’s give it a shot. So, we began to move down, level by level, showing the ushers our bands. They kept sending us down, level after level until we finally reached to ground floor. Our “Paid Tickets”, were actually “Pit Tickets!” We shrugged and though, might as well give it a shot. Into the pit we went! My son was a bit freaked out. He kept saying, “We’re gonna’ get moshed!” and sure enough, as soon as the concert started the moshing began. Fortunately the guards were right on it, threw the moshers’ out and we watched the entire concert about 15 feet from the stage. We all had a blast! Talk about good Karma that day! Things just went our way. 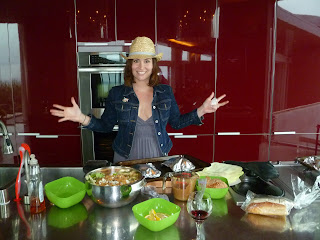 This weekend the tables’ were turned. It was Mother’s Day/my birthday week and I was the one on a mystery ride! Joe told me what to pack and told me to get into the car. Now I knew how the kids felt! Part of me was frustrated, but the other part was excited. We headed south and I had no clue as to where we were going. We stopped and ate a late lunch which was very unusual; and then we finally got back into the car and kept going. We pulled into the parking lot of some townhouses, then turned around and parked on the street. Joe got me out of the car, covered my eyes with his hand and led me to a door and knocked. I was totally baffled.
The door flew open and my brain recognized this adorable little boy! It took me a second to realize that I was looking right at my grandson! Then my daughter poked her head around the door. Chemo has made my brain a bit slow, but talk about being dense! Finally it sunk in that we were staying at my daughters’ new home for the weekend. She made us a lovely dinner and then we played cards. The surprises continued throughout the next day
. 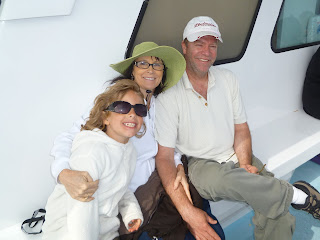 They wouldn’t tell me anything that we were doing. We first went to my grandsons’ carnival at school, and then we went Whale Watching. We didn’t see any whales, but we did see the token sea lions and a few dolphins. After being out on the ocean, my daughter surprised me with a wonderful dinner, prepared by Chef Stacy, at her friend’s home overlooking Laguna Beach. More cards and a bottle of wine and then we headed back to her place for the night. We headed home in the morning; my very first mystery trip as a participant; not the planner. It was a grand success! Thanks, guys for such a fabulous weekend!
Posted by Michele at 5:54 PM