Waking Up in Paris…….A Perfect Day!


Whoaaaaa….it is 10 am Paris time and I am not feeling so great. Headache, nausea and body aches; this must be “real” jet-lag! Bleck…. I think I shall stay in bed and relax a bit and try not to stress out that Paris awaits!

After about an hour, I braved a cup of coffee and a a croissant, delivered to me, in bed by my husband, who has been up for hours, poor guy! After about another hour, I decided to push it a bit, get dressed and hit the streets.

Prior to arriving in Paris, we purchased a  3 Day Paris Pass, and had to go and pick it up, after printing out a voucher; which we did, quite easily in the business office of the hotel. The concierge gave us a quick tutorial of the Metro system and we were on the streets; with NO phone, smart or dumb, just us, our backpack with the essentials (meds, for whatever may ail me, snacks, water, paper maps, rain jackets, an umbrella for sun and rain, ID’s, money, a sweater for me, our voucher, chapstick, mints, camera, iPad, hat and sun glasses) which Joe lugged around all day. I DID have my cool new purse with “my” stuff. Which included the tights I had on when we left the hotel, and came off in the café where we stopped for lunch! Lol 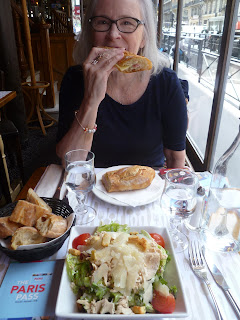 After navigating a one train switch on the Metro, we found the place to exchange our voucher for our Paris Passes; I am not sure “value wise” if they are a “good deal” or not, but the allure of skipping some of the lines,  was enough to sucker me in!

They gave us a little book with all of our options and a Metro pass that has unlimited use and a Museum pass, too. While we ate our lunch, we opted for the Hop on Hop off bus tour to start, as I was still not quite up to par; we thought that we would just Hop on, and stay on!

I had a ham and cheese sandwich, on a baguette. When it arrived, I was surprised to see it was just that; ham, Swiss cheese and a baguette! Nothing else on it, and what I can tell you is that it was DELICIOUS !!! It must be that chewy bread, it was so good I nearly ate the whole thing; I think Joe enjoyed his salad, as he cleared his plate, too. 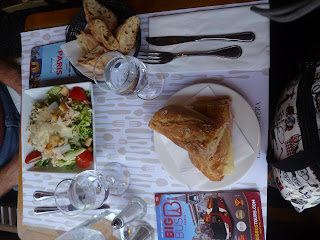 After lunch we walked down to the Opera’ Garnier, what I beautiful building; my eyes could hardly believe what they were seeing. I cannot fathom how these buildings are constructed, especially so many years ago. We were too late for the guided tour included in our pass, so we stuck with the original plan and hopped on the BIG RED BUS! It was a double decker and gave such a unique view of the city; fortunately there was a ton of traffic which gave us plenty of time to look around and take photos. I would highly recommend this tour; we only had time for the red line, as I was such a slug this morning, but the blue line was included in the pass, as well. 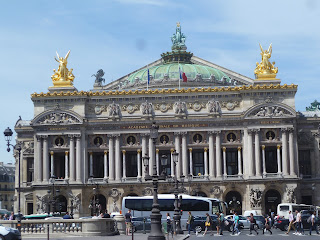 The bus took us past the Lourve’ and through an arch where I looked up and saw a man, WAY up on top of one of the domes,  at the Louvre’; who knows what he was doing, but I found it picture worthy! 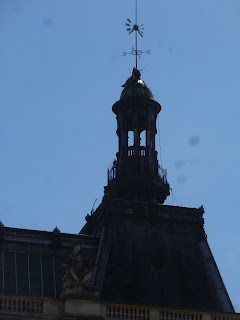 We continued on to Notre-Dame where we decided to get off the bus and wander around.
What an incredibly beautiful church. I don’t know what it is about churches, but they always make me cry; humbled tears. I lit a candle for my mom and dad, and said a small prayer, which made me cry more…lol. As we continued through the church a sense of peace and gratefulness came over me and I felt so very fortunate to be alive and to be HERE! What a gift my life is, I was reminded to cherish every minute. 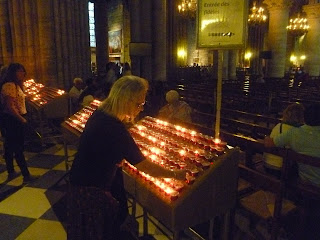 After sauntering through the church, we thought that we would see how long the line was for the towers; included in the pass, but no line skipping here; we decided it was too long, and I figured that I could see the gargoyles “well enough” from where I was, so we hopped back on the bus! Back up to the top with the breeze blowing through my hair; at lease when the bus was moving! 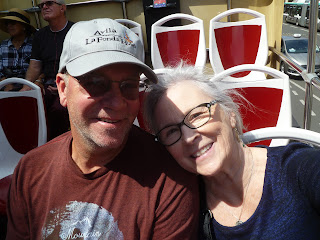 On to the Muse’e d’Orsay, which thanks to someone forgetting their ear buds on the bus, we heard that the museum was open until 10:30 that night, so we went in; this was probably 4:30 ish. It is a beautiful museum full of Monet’s, Manet’’s, Reinior’s, Dega’s , Rodin’s Van Gogh’s and Rouseau’s plus so many others. I think what surprised me the most was the actual “colors” in the paintings; so much clearer, cleaner and crips that what you see in art books. You could spend an entire week just In the d’Orsay, t since we are on the Cliff note version of Paris, we went and hopped back on the bus. (Price of admission included in the pass) 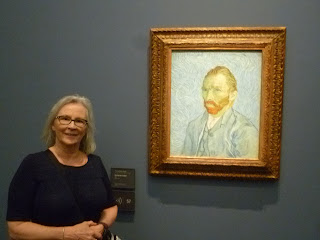 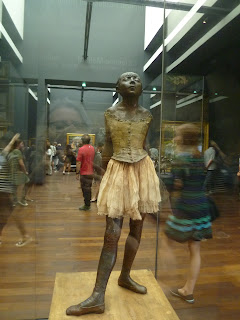 We continued down the Champs-Elysees and once again the BUILDINGS! Amazing! And the shops, one after another, and people sitting at café after café, just incredible and such a great view from the bus.

We continued down Grand Palais, and towards the Arc de’ Triumphe; and as fortune would have it, there were police everywhere,  and the circular drive around the acr was closed, just as we approached. We were in the front of the line and were able to witness some sort of ceremony going on in front of the arch; around the eternal flame, honoring the Unknown Soldier, were flags and flowers, and there were bands playing music and soldiers in uniform. It lasted about ten to fifteen minutes and we were so blessed to have been there, at the right moment in time. 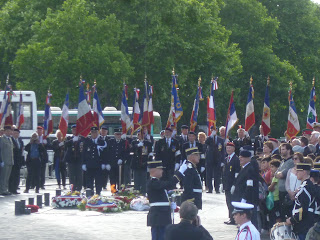 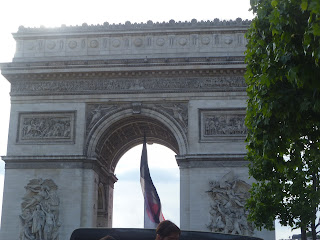 As soon as the road opened, the bus continued around the circle and I caught my first glimpse of the Eiffel Tower; excitement erupts here! Lol The bus continued down more amazing streets and we ended up right at the tower. This was our last destination of the day, so we parted ways from the Big Red Bus and went through security and underneath the Eiffel Tower; photos do not do this structure justice. It is stupendous in every way! The SIZE alone was more than my wildest dreams have ever conjured up, and the construction of the structure is purely remarkable. Standing under the tower we discuss what to do next; Joe says, “Well, we most likely will never be here again, so let’s walk up the tower!” 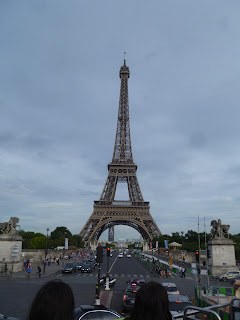 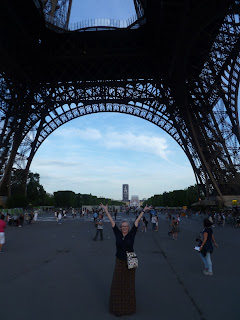 So, I said, “Let’s do it!” Despite the fact that in my older age, I have become quite afraid of heights! Lol Ir was somewhere around the tenth staircase that I began to wonder what the hell I was thinking! My legs were burning, I was a bit out of breath and I felt like throwing up, just from looking down! By the time we were halfway up, I really didn’t think I was going to make it; in SO many ways, but no wanting to let myself, or Joe down, me and my CML body trudged upwards! There are 328 stairs to the first floor, which was as high as I was going; FREAKY, but amazing at the same time. 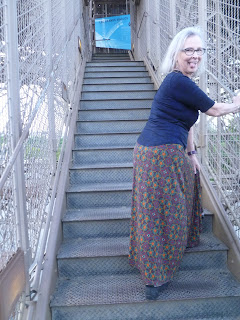 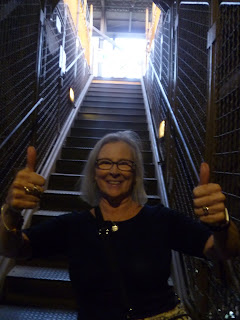 The architecture is just beyond anything I have ever seen and the views, when looking out are incredible, as long as I didn’t look down, I was good; right up until we decided we had seen enough and started our descent. In some ways going down was worse, since you had to look to see where you were going, you saw the ground; somewhere along the line, I started step counting to distract my mind and keep me from panicking.

We made it down in one piece and I was quite proud of myself for conquering my quest.
We realized that we were just across the street from a boat tout that was included in our pass, and since we wanted to do the night cruise we hustled over to the loading dock; it was nearly 10 pm and just getting dark. We got on the boat and at 10 m, on the nose the Eiffel Tower had it’s light show! It was spectacular; talk about the perfect way to end the day, with a light show of the Eiffel Tower and an hour long boat ride. 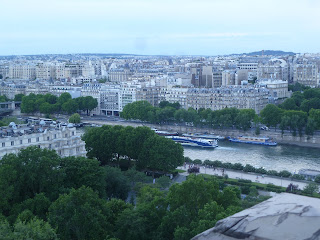 As beautiful as the buildings, monuments and museums are in the day; they fail in comparison to what they look like at night. We were able to sit on the top deck and enjoyed not only the scenery, but the cheers from other boats and the throngs of people along the river walk; so MUCH FUN! We had a blast.

As we returned to the loading dock, the Eiffel Tower gave us one last light show; the perfect ending to the perfect day.

Please forgive repetitiveness and typos; it was a LONG day!