Yesterday was a lovely, relaxing day spent on the ship. We found our favorite little nook in the back of the ship and played cards, all day. Dining that night was in the fancy French restaurant, Le Bistro. The food was fabulous and everyone enjoyed it except for Joe, who was suffering from tummy ailments. Fortunately, he quickly rebounded and was doing well the next day.

It was nice to have a down day, with little to do.

Today we docked in Casablanca. Many of you know that I have always wanted to go to Africa, who would have ever thought that my first steps onto the continent of Africa would be in Casablanca, Morocco? Certainly not me!

I have to admit that I was just tickled to be in Africa! How cool is that?

Many people on the ship were too freaked out to go into the city, but the four of us had an agenda. We planned to get a cab to take us to the Hassan II Mosque, Rick's Cafe and the market.

Once we left the ship, we were bombarded with cab drivers, which we totally expected. They started out telling us the cost would be $40 euros each person for three hours. Eventually, we agreed to pay them $90 euros for the four of us, for three hours; a savings of $70 euros.

They were very, very pushy and I think that I need to eat my Wheaties before I get off of the ship again; I am sure we will do better next time!

At any rate, the cab driver was kind enough and very competent. He took us where we wanted to go and waited for us to return. At one point, when we got back to the car he was face-timing  with his spouse, once we all were in the car, he said, "Say Hello to my husband!" We were all thinking, "Really? He has a husband?" When he turned the phone around, we realized that his husband was actually his wife!  We all laughed and explained to him that he was the husband, and she was the wife! It was very funny!

Our first stop was the mosque and it was breathtaking. It is situated right on the ocean. There really are no words to describe the beauty and detail throughout the entire building. Apparently, it can hold 80,000 people outside and 25,000 people on the inside. Supposedly it is the world's largest religious monument after Mecca, with the tallest minaret.

Apparently, it is only full during Ramadan.

The gal giving the tour was very informative and after the tour, we chatted with her a bit. It is her dream to go to New York City and take her children, which she planned to do in three years. She said she was born in Casablanca, lived in Marrakesh and moved back to Casablanca because they were more "open-minded" in Casablanca. 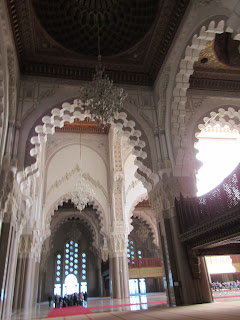 She also told us that we arrived at the perfect time as there were many large crowds there in the morning, and then they were closed, and just- opened when we arrived and were closing again when we left. I am thinking we had angels watching over us today!

After we were finished at the mosque, we went over to "Rick's Cafe", a total tourist play on the movie "Casablanca". I am not so sure whether they depicted the cafe from the movie really well or not, but it was a lovely restaurant, decorated from the time period of the movie; we were sitting upstairs, at a roulette table and the movie was playing on a television.

It was a nice break from the noise, the hustle, and bustle of the city, and the construction.
Unfortunately, their internet was not working, so I was unable to give you guys an update! 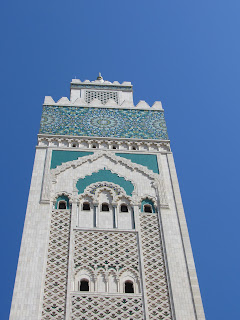 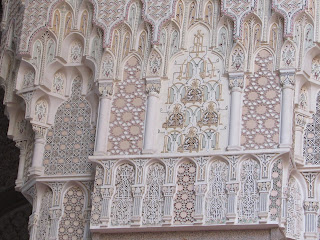 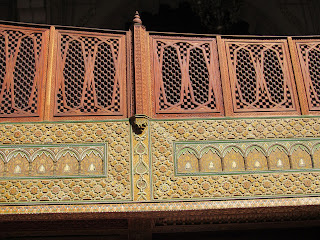 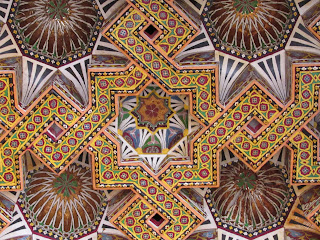 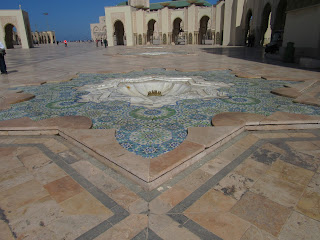 Afterward, we headed to the market which, in my opinion, was like any other market; a bit dirty, some pushy people, and in this country all men. I am pretty certain that half of their "wares" were made in China!

I did buy a nice scarf for $10 euros, and then we somehow managed to get ourselves lost in the bowels of the market!

It was a bit uncomfortable walking past doorways of men playing pool, other men wandering around, motor scooters driving past, laundry being done in a fountain and old men and women sitting on chairs, It was very dirty, smelly and appeared to be very poor.

Eventually, we found our way out of the maze and back to our cab; I cannot say that I ever felt fearful, or in danger, but we were probably somewhere we should not have been.

If you are ever in Casablanca, do not be afraid to explore a bit; I do not imagine I will ever come back to Casablanca so I am very happy that we got a small taste of a very different culture. 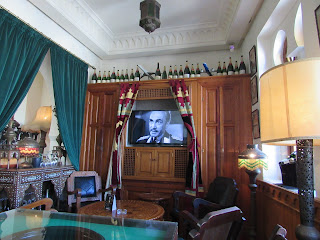 Once back on the ship we enjoyed playing cards, eating dinner and watching the show. The entertainer tonight was a singer named Shane, from London, and he was fabulous! He sang rat-pack songs and Michale Buble', along with a funny and charming personality made for a great evening show.

THEN we headed to the nightclub and listened to the last set of 60's and 70's music and watched the crazy people dance to the rocking ship! I have enjoyed more of this ship in five days than I did the entire time I was on it nearly two years ago' traveling when it is not hot is the way to go for me!