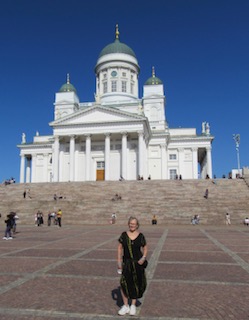 Last night Joe surprised me with dinner in the "fancy" restaurant on the ship. Other than being so much food, it was delicious. I had the lobster tails as the main course and thoroughly managed to stuff myself. It was nice being in a quiet dining room with extremely attentive staff.Thanks, Joe!
This morning we woke up in Helsinki. Helsinki is Finland's largest city and was founded in the Middle Ages to be a Swedish rival to other ports on the Gulf of Finland, but remained a small fishing village for over two centuries.
We did find a taxi right as we got off of the ship, which was a good thing, because the four of us all said, "If there are no taxis, we are getting back on the ship!" That would be how tired we all are!
Anyway, the driver started out at 160 euros for two hours, and we were like...."ahhh, no, too much," he quickly asked what we would pay and we said 100 euros for two hours. He agreed and we hopped in.
Our first stop was the Helsinki Cathedral which is the Finnish Evangelical Lutheran cathedral located in the center of Helsinki at Senate Square. It was built in 1830-1852 as a tribute to the Grand Duke of Finland, Tsar Nicholas I of Russia.
With its domes, it reminds me of the Taj Mahal and is built in the neoclassical style, and is quite plain on the inside. There was a fabulous view from the top of the 46 stairs, yes, I counted them, and we enjoyed seeing Senate Square from above. 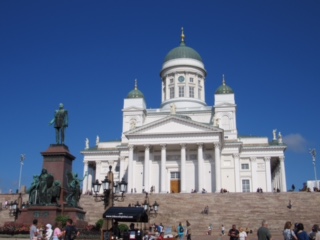 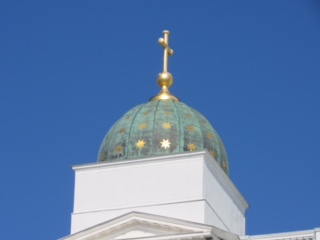 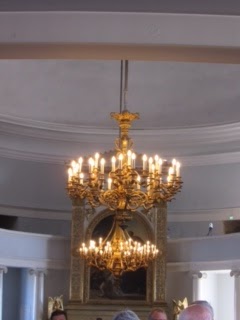 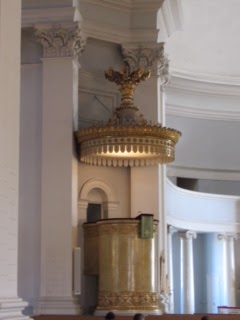 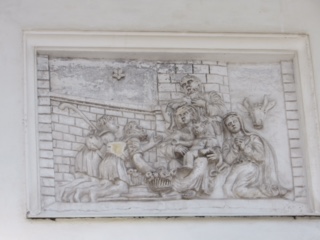 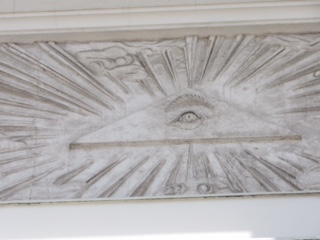 Senate Square and its surroundings make up the oldest part of central Helsinki, The Helsinki Cathedral, the Government Palace, the main building of the University of Helsinki, and the Sederholm House, the oldest building in Helsinki dating from 1757.
Alexander II is a monumental statue located at the bottom of the stairs of the cathedral. The main figure depicts the Grand Duke of Finland giving a speech at the 1863 Diet of Finland that he had assembled. 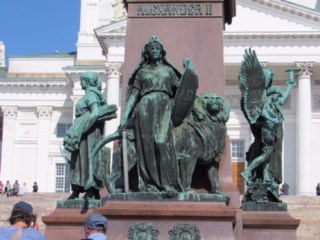 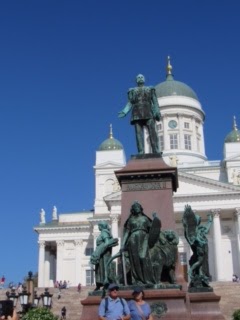 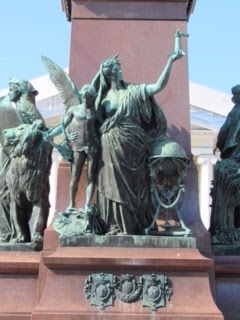 The next stop on our tour was going to be the Rock Church, a church built directly into solid rock and it was a highlight on the Carnival tours, so we thought maybe we would check it out. We drove to the entrance and there were throngs of people, which was no huge surprise; hard pass! We told him to just keep right on driving. 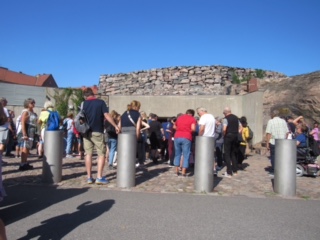 He drove us over to the local library, which was modern in style. The design was won in a contest of 544 competitors. It was kind of cool to go inside and see children and adults playing chess, 3D printers printing off someone's designs, a table full of state of the art sewing machines of all kinds, printing machines for large prints, and computers for use, too. There were reading rooms and meeting areas. It was a very unique library, with much to offer. 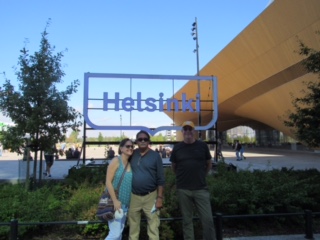 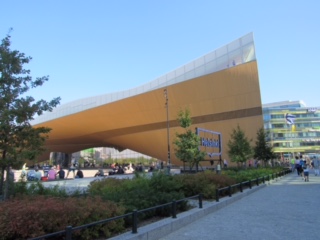 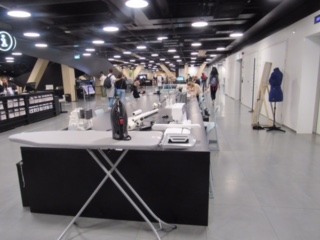 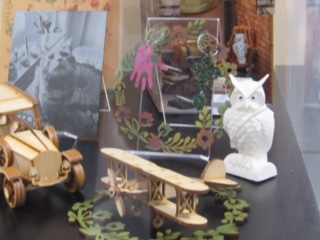 In front of the library is a really strange, unattractive to me sculpture; just thought I would share! 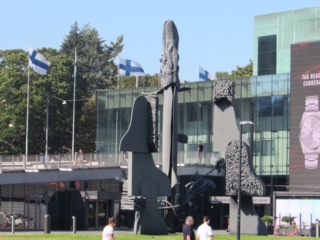 Outside there was a flash mob just beginning. They had a large group of people that they were handing out colored paper to, in order to create a Ukrainian flag. There were drones in the sky to capture the flag, to let the people of Ukraine know that Finland supports them, and are thinking of them. If we had had more time, we would certainly have joined in. 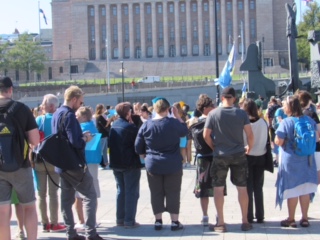 After leaving the library, we went to the Uspenski Cathedral, where, of course, there was a wedding, just getting ready to begin! The church was built in 1862-1868 from 700,000 bricks brought over in barges from the Bomarsund Fortress that had been demolished in the Crimean War. I loved the red brick, and I found the outside of the cathedral much more fascinating than the inside. 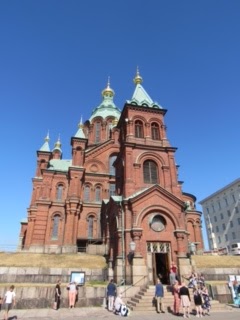 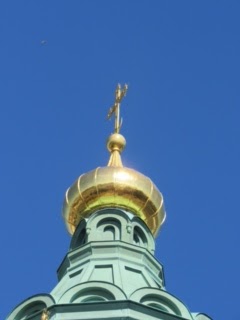 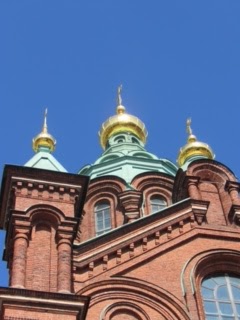 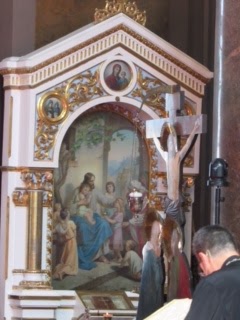 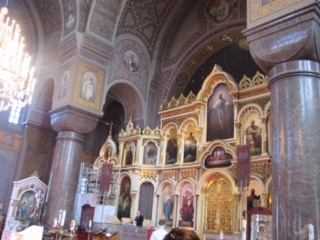 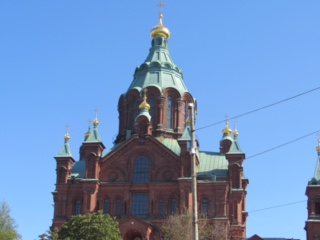 The inside of the cathedral was full of glitz, glam, gold, and marble everywhere. I did enjoy the blue ceiling in the dome area, and the paintings on the arches and pillars of the church. It felt like there was a whole lot happening in a small space!
I didn't take many photos, because just as I was about to take another few, Joe said, "No pictures allowed." I just hate how he always manages to see those signs that I try really hard NOT to see!
By then our two hours were up, and we said, "James, to the ship, please!"
Along our drive back "home", we saw the train station, which was rather cool, with weird statues holding some sort of globes in their hands, a cool old building that we think was some sort of government building, a moose, and some sort of recycling place (?). We arrived back in plenty of time to relax on the boat, play a game of Hand and Foot and relax before dinner. 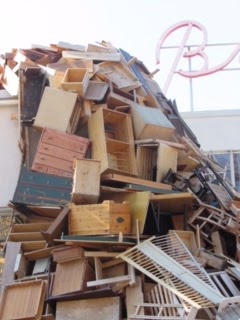 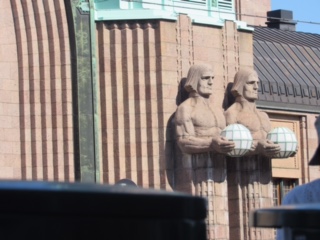 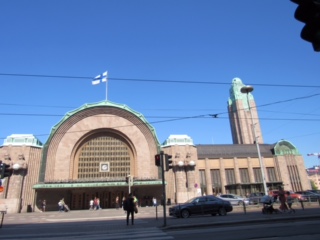 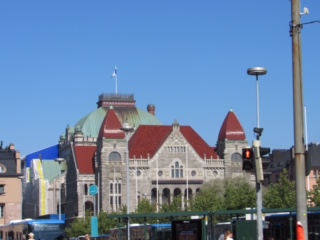 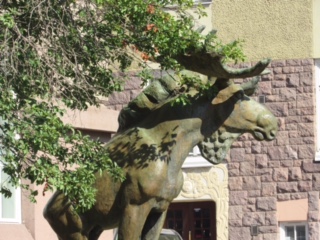 Tomorrow we will be in Sweden.
Night, y'all!