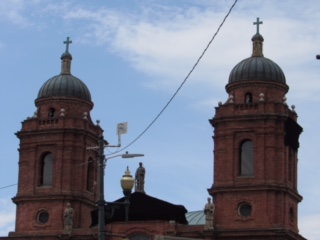 After a fairly good night's sleep, I woke up to find that the breakfast fairy had arrived with the most amazing almond croissant and the most delicious quiche I have ever eaten. That and a cup of coffee and I was in heaven!

After eating, I crossed my fingers and headed to the lobby. Since it was before noon, I didn't have high expectations that my meds would be at the front desk but much to my great surprise they were!

Pfizer Oncology Together to the rescue! I must admit that I was quite impressed with the speed in which they delivered my Bosulif; less than twenty hours. Thanks, guys! You ROCK!

With that little hiccup handled,  I was able to be 100% present for the rest of our trip.

Right next door to our hotel is the Thomas Wolfe House, and being that we love old houses, we thought that it would be the perfect beginning to a lovely day.

Thomas Wolfe is considered by many to be one of the "giants of 20th-century American literature." He wrote about his friends and family and life in Asheville, North Carolina, and not necessarily in a flattering matter!

The home where he grew up, a boarding house owned by his mother, became an inspiration for much of his writing and when "Look Homeward, Angel" was published, there were a lot of angry people in Asheville, despite his attempt to disguise the many stories he told, by changing their names. 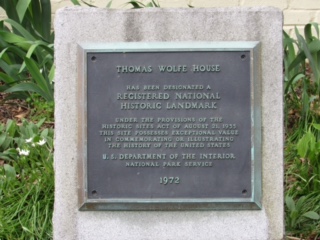 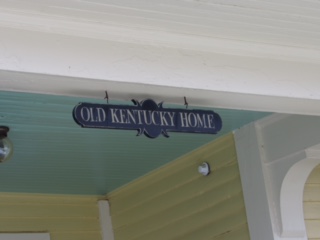 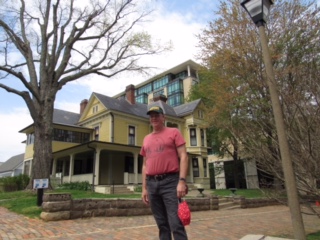 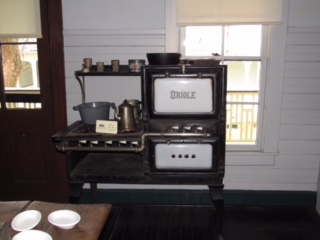 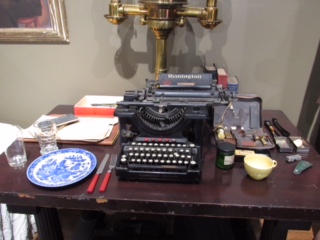 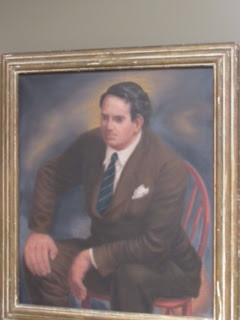 I was most impressed with his mother, Julia Elisabeth Westall, a woman who was so ahead of her time. Buying and running a boarding house, along with purchasing and selling additional real estate led to the family's relative affluence. It seems as though she was quite an impressive businesswoman. 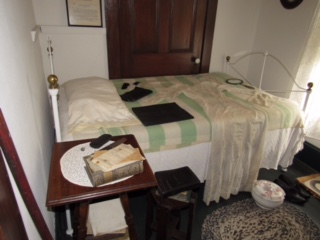 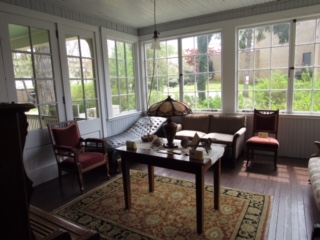 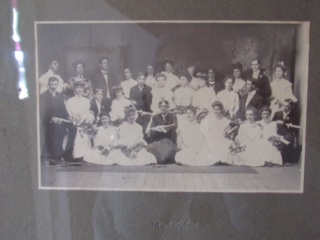 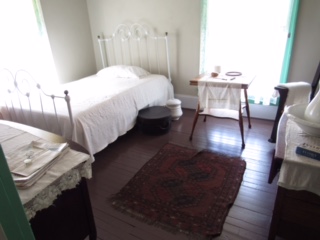 I would venture to say that she must have been born with her tenacity, as I do not believe that she would have had many role models, in Asheville, at that time.

It was also quite impressive that the house was still intact from years gone by, with most of the original furnishings still in place. It was a charming place, and even though there were apparently many people sleeping under that roof, sharing beds and one bathroom, making personal space non-existent, at all times, I can only imagine that the light and bright atmosphere, along with Julia's attention to details and decor would have made the boarding place a desirable place to call home. 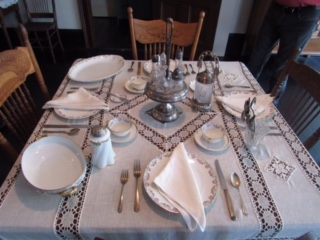 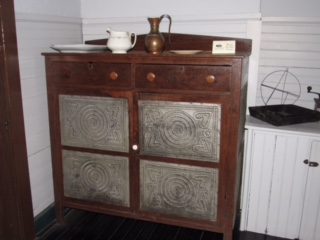 If you ever visit Asheville, The Thomas Wolfe House and Museum are well worth the $5 entry fee. I suppose we have covid to thank for the personal tour we received.

After visiting the Thomas Wolfe House, we headed a few blocks over to "downtown". The Bee Charmer boutique called my name and we stepped inside to the most darling "everything bee" shop I have ever seen. 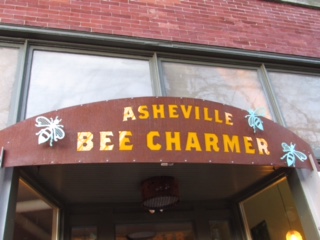 They had local honey from all around the Asheville area lining their walls, which created a lovely visual experience. I had no idea just how many different colors and hues could be created by the busy little bees, flying all over, from flower to flower, collecting pollen.

Since Joe recently started bee-keeping, this has become a fascination to both of us.

I tried several different types of honey at the honey tasting bar and was amazed at the difference in taste, texture, and velocity. I wanted to try every single one, but did want to make myself sick!

The songs about Tupelo Honey kept coming to mind, while I was wandering around the boutique, so we obviously had to buy some to bring home.

It turns out that Tupelo Honey is a real thing and comes from the nectar of only one type of flowers, which grows on a tree only in wet, swampy soil, such as in the Florida Panhandle and Southern Georgia.

It has a mild floral and fruity taste and is light golden and amber in color, with a greenish cast. It is a bit expensive but oh,  so delicious. I also "had to have" a bottle of honeysuckle honey from France, and some bee pollen, too.

The owners of the shop and a friend of theirs wrote a cookbook, called the "Bee Charmer Cookbook" which is filled with all kinds of amazing recipes and beautiful photos, so that is coming home to Tennessee with us, along with a few other little amazing gadgets, one which I designed and invented in my head, decades ago! Bahahaha

I will let you see if you can guess what it is! (I will post a photo tomorrow!)

To say we were charmed, by the Bee Charmer, is an understatement!

After that little jaunt, we headed back to the hotel as this old lady was pooped and needed a short rest. But since it was still early, I wanted to do something else, other than sit in our room, so after perusing our options, we chose the Trolly. 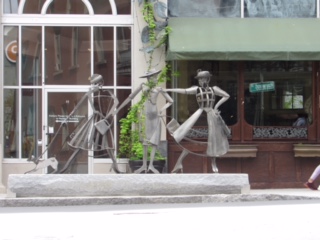 In Europe, we always enjoyed the Hop On-Hop Off bus tours, as they gave us an overview of the entire city, in a short period of time, which would help us get a glimpse all of the different areas, helping us to choose where we would like to spend more time.

I was delighted to find that Asheville had a Hop On-Hop Off Trolly, (although there was no getting off and on, due to covid, which was fine with me, as I just wanted to ride from the beginning, to end anyway). We quickly bought tickets online and hoofed it to the beginning of the route.

They were waiting for us when we rounded the corner and we hopped on. 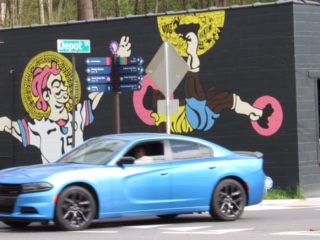 Our driver and guide, "Uncle Tom" was informative, funny, and detailed. Instead of the 90-minute tour, our tour, because it was so small and the last of the day, lasted two hours and fifteen minutes! 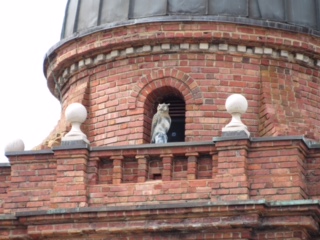 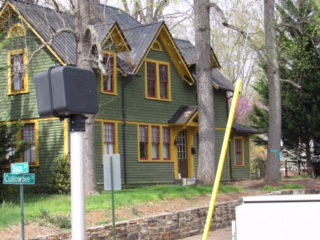 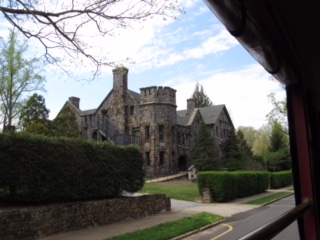 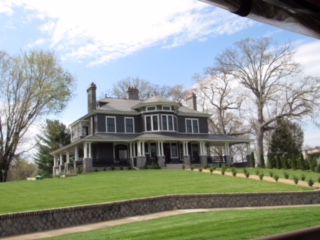 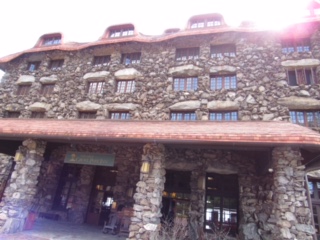 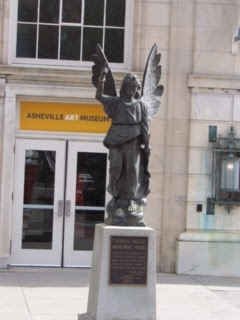 He took us extra places and told us extra stories, where the locals eat and some of the inside politics, which I will not get into here! 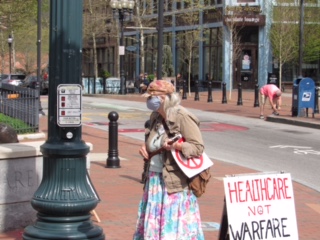 After taking us back to the drop-off point we told him we were staying at the Renaissance, which was one of the tour stops, as the Thomas Wolfe House is right next door. We thanked him profusely for such a great overview of his lovely city and continued to chat a bit more. As we were talking, he told us to jump back on the Trolly, because he was going to drive us over to our hotel; all the while, telling us more stories. TOTAL BONUS!! And of course a big tip for "Uncle Tom"

That would be God throwing me another bone!

I highly recommend the Trolly Tour, and Asheville, North Carolina; we are just loving it here. Based upon Uncle Tom's recommendation, we went to "Little Pigs BBQ" for dinner, which was quick, easy, and delicious. 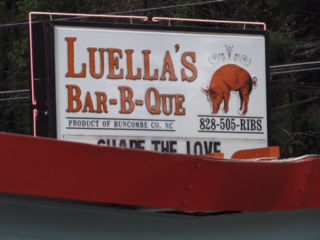 Night y'all, it was a great day!