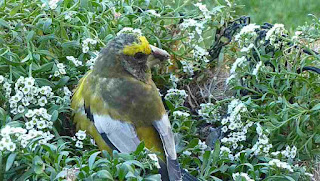 This morning my husband called me to the guest room to look out of the window, at all of the "new birds" on one of our feeders.  There must have been thirty to forty birds voraciously chowing down on the birdseed.

They were quite beautiful; yellow, gray and black feathers with a stubby sort of beak. We watched them flutter around, and listened to them chatter for several minutes, before heading downstairs.

Just as we reached the ground floor we heard a loud thump! We instantly knew that one of those birds had hit a window, and had hit it hard. We went out the back door and looked around; my husband saw downy feathers flying and quickly located the little bird.

He reached down, picked up the little guy, whose foot was stuck between the deck boards, and cradled him in his hands. He was limp and unconscious and we saw blood coming out of his open beak, and where his beak met his head. 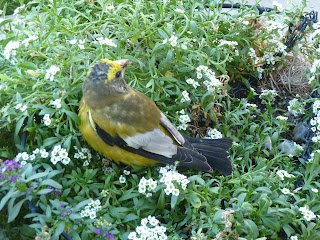 We started to stroke his head and breast, and his eyes began to flutter open; eventually, he held up his head. His poor little heart was beating so rapidly that we thought for sure he was going to die.

As the minutes ticked by he seemed more and more alert, yet his beak remained open and full of blood. Within five or so minutes my husband set him down, in a flower basket. At first, he seemed a bit unstable, but eventually, he was able to hold himself upright.

I sat with him, petting his head for ten-ish minutes as he vacillated between dozing and alertness. I did not know what to do, so I said a little prayer; I prayed that God in his wisdom would heal this little feathered creature and allow him to fly free again. 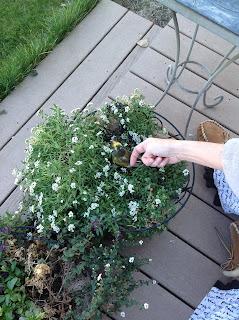 I wasn't really bargaining with our Lord, but there was a small part of me that was pleading with God to reassure me that he was still here; that he truly cared about every one of his creatures, both large and small, and that no matter what, he was with us. I wanted the reassurance of witnessing a small miracle.

I know that may seem selfish and that I may sound a bit like a doubting Thomas, but sometimes an extra sliver of hope comes along,  just when you need an extra boost. Sometimes you DO get what you ask for; so I asked.

I decided to go inside and see what the little guy would do; I was still torn about whether or not to try and clear the blood from his beak, or to leave him alone. After a short time, I went back outside; he was still sitting in the flowers and I once again began to stroke his head and body, looking to see if I could see any other injuries. I also grabbed the camera! 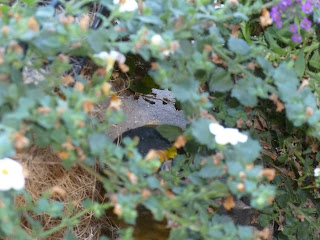 While I was taking a few photos, I noticed that one of his friends had joined him. A second bird was there, sitting between the baskets, just out of my sight, keeping his friend company. I also noticed a single female, sitting in the tree, keeping watch. It was so touching to see how even the smallest of creatures had such compassion and concern, for their fellow feathermates.

I once again came into the house; the female bird flew closer and kept watch. The little guy that hit the widow began to shake his head; he began to rub his beak on the flowers; we figured that he was trying to remove the blood. He continued in this manner for a while and then became still. I wasn't sure whether he was worn out; or dead.

I went out one more time and saw that his eyes were closed; I stroked his head and he opened his eyes. I saw that he was able to shake bloody birdseed from his beak and that his beak was now closed; I saw this as a hopeful sign.

I stepped away and the bird from between the baskets flew to the tree, the female flew to the tree, and then our little miracle bird joined them! I was elated and full of awe; this little guy had my husband not picked him up, would likely have died.

I  truly feel as though I witnessed a miracle and was sent a Bird of Hope this morning; I Praise God, Thank God and am so grateful to be here, to share this miracle with you! 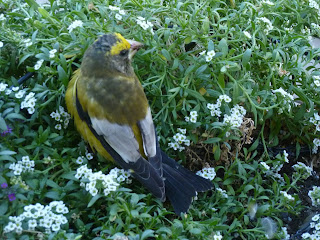