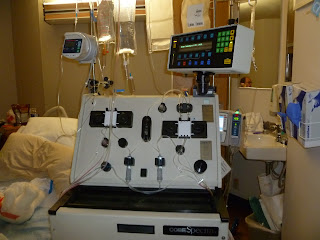 February 10, 2011 has turned out to be a very, very, long day. The short reprieve was much welcomed but came to an end too quickly. About 5 o’clock in the evening, just in time for another gourmet hospital meal (hospital meals are always tastier cold), in waltzed Nelson. (Can you tell where my mind is?)  He said that he was there to perform the Leukapheresis procedure that Dr. Camacho had ordered. He said that it was a treatment to rapidly lower my white blood cells. My doctor was extremely concerned with the headaches that I had been having and did not want to complicate my leukemia with a stroke. You see, when you have an extreme amount of immature and damaged white blood cells, they can clog up your capillaries and veins, causing them to rupture, hence the risk of a stroke. My eyeballs were already affected and bleeding and I certainly did not want to start drooling, limping and needing to be fed, so I signed all of the necessary consent forms, including the ones that listed death as a possibility, and proceeded to learn all about this machine that I could.
The poor guy that had to squeeze me into the end of his day was stuck with my questions and my body’s strange responses to the treatment for 5 plus hours. He explained that the large machine was something like a dialysis machine. He was going to remove the entire volume of my blood three and a half to four times and run it through his machine removing as many white blood cells as possible.
He attached two main tubes to the catheter in my neck and then proceeded to thread them through his machine. One tube was to remove the blood, the other to return it into my body. My favorite part of the machine is a barrel looking thing where the tube wraps around and around. It is actually a heater that heats the blood before returning it to the body.
There is a window in the machine where he monitors the color of my blood. There is a chart with a graduation of color on it. It is his job to maintain the correct color, kind of a rusty/corral. He watches through a window where there is a barrel that spins the blood so fast that a strobe light is needed to get an accurate reading. Centrifugal force is used to separate the white cells from the blood.  His goal is to remove white cells; however platelets and red blood cells also sneak into the mixture so adjusting the speed can be tricky. The removed fluid goes into a bag that is hung above the machine.
While all of this technical stuff is going on, my vitals are constantly being monitored. Of course, because I am SO special, my blood pressure is extremely low 72/34 ish, and my temperature starts to climb. The process is making me nauseous and they have to keep slowing it down in order to allow my body to adjust. The RN explains that giving calcium through my IV helps with the nausea. He feels that they will need more for tomorrow’s treatment. They actually removed approximately 1075 ml of fluid containing mostly white blood cells. The whole process is exhausting.
The technician explained to me that it was normal for the white count to go down right after treatment but not to be disappointed if it went back up a bit the next morning. He said that this was the normal trend. Before the procedure my white blood cell count was 372,100. After the treatment it lowered to 273,100. The goal was to continue this process until the white cells were below 100,000. I was quite impressed that they had almost removed 100,000 of those little suckers and I pleaded with my body to remain at the low level.


The absolute worst part of this whole procedure was that I was unable to get out of bed. And the worst part of that was the fact that they continued to drip IV fluids into my body at a steady and continuous pace. Now if I had been a guy, this wouldn’t be quite the issue that it was for me. Yes, you guessed it….the dreaded Bed Pan. 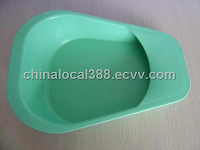 Two things that I learned about the bed pan were; first and foremost call for it long before you REALLY need it and second hang on to it once you get it. I would like to tell you that I had a few tips on how to use it, but to be perfectly honest with you I still don’t know which end is the front and which end is the back. What I can tell you is that regardless of the reason you find yourself faced with the prospect of using the bed pan or wetting the bed, you had better bring your sense of humor along. That oval shaped, plastic thing is very uncooperative! When you attempt to sit upon it, it weebles and wobbles. It even has a tricky way of shooting right out from under you. They actually call it a "Slipper Bed Pan". If you are lucky the hospital staff will leave you alone, if you are not you can count on getting stage fright. The only things that I could really do were laugh and apologize over and over to Joe, saying, “I am so sorry, you weren’t supposed to have to do this until I was 80!” Fortunately we had a good laugh and have survived the day, thus far.
Posted by Michele at 4:21 PM