I did manage to get a decent nights sleep last night so I am feeling tired, but pretty good. We decided to shorten our touring to three hours versus four as we were all a bit tired of islands, their traffic, and driving around them.

This island, which I learned today is actually the largest of the Canary Islands was mountainous, and the sky was a bit overcast. Our choice of cabs and drivers was limited to one, so we agreed to pay him 80 euros and we got into the cab with no idea of where he was taking us other than we could "click, click, click",  his words,  for photo ops. lol

The island was much more crowded with many more cars and people and with the cloudy skies, the lookouts were not as pretty as they could have been.

After stopping twice I told him to take us to a church! lol He had no idea what I was talking about so I showed him praying hands and the sign of the cross. He said "Yes, yes!" and off we went. The church was smack dab in the middle of a very busy intersection of cobbled streets, so getting out of the cab was a little tricky! It was a very old church with a stone floor that had many broken stones and wobbled when you walked.

There was a huge purple drape covering the back portion of the alter so it was hard to imagine whether or not what was hidden behind, was spectacular or under restoration. The rest of the church was pretty typical of what we had seen on the other islands, although not quite as picturesque. 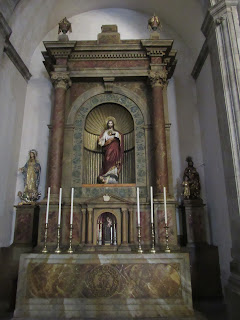 After a short trip through the church, he drove us down to the tip of the island where the fancy resort was situated and there were streets and streets of cafes and Schottky shops. We were able to score some playing cards from Tenerife and the Canary Islands and then we went and sat at Cafe' de Paris.
I think we are four tired touristas!! The boys had cerveza and I had a coffee which was enough to allow us four passwords for one hour of internet use which we all used to touch base with everyone at home.

The cafe was charming but the servers were not!

I didn't find the people of Tenerife overly friendly and despite its' pretty terrain, I did not find it terribly inviting. I can check the Canary Islands off of my bucket list.

After having lunch at the buffet on the ship, we went to the bow to play cards where there was a great vantage point to observe the ship sailing away. There was a woman intently watching us play cards and eventually asked what we were playing. We told her we were playing Hearts, and she said, "When you start a new game, can I play?"


We told her to come on over and we taught her the game; she was a kick! We now have a new friend, Genia, from Canada. She told us that she loved Indian food and that the Indian chef told her he would prepare a special Indian meal for her, for dinner with 24 hours notice, so it looks like we will be having a special meal, with Genia on Wednesday night! lol

Tonight was dinner in the Windows dining room with our favorite waiter Bariane and our new best friend Alin, from Romania, the Maitre'D. Alin said that he had worked with Bariane in another dining room on the ship and that he was very good. So good, that he sent all of his "high demanding" customers to Bariane's station. I told him that was why WE asked for Bariane every night because we were high demanding!

He laughed and said, "No, no! You are not high demanding!"

Next thing we knew Bariane was standing over us with the fancy wine list, the one with bottles only, and he told us that Alin would like to have us choose any bottle that we would like, his compliments!!

How crazy is that? We told him Thank you, but we had already ordered drinks and didn't think we should have a bottle of wine, too. He said pick one! I will send it to your room and you can have it anytime you like! So we chose a bottle of Asti Spumanti and we will have it either during, one of our fancy dinners at Cagney's Steak House, or Le Bistro or share it with Genia, on our special Indian food night.

I have never had so many staff members send us surprises and give us thing before. I certainly cannot complain about the service around here.

We decided to go to the show, it was a rock and roll, high energy show full of dancing and singing which was the perfect way to end the day. I loved the music, most of the singers, and one dancer in particular; she was AMAZING and it was obvious she was giving it her all; you could tell the rest of the dancers were just doing their job.

One more day before a sea day, I had tricked myself into believing that it was tomorrow, but NO! Tomorrow we will explore Funchal, Madiera. (Portugal)

Can you tell that my brain is fried??