After spending three straight days in a row driving around islands, I was tempted to skip Funchal. Once I looked out of the window in our cabin I was intrigued enough to make the effort to go and take a look; I am so glad that I did!

Typically when we leave the ship there are many taxis waiting, prepared to start fighting over you, to take you on a tour. At this port, there was only one taxi. The driver did not speak English but we got the jest of what he was saying, "I only go to city center, no tours, and do NOT bother me!" lol He was rude and unhappy but he managed to get a few people to hop into his cab.

After he left another one pulled in. We asked him the same thing if he could take us on a tour and he responded with hand gestures that basically said to get away from him and to wait "over there!"
We waited for a few minutes while enjoying the graffiti on the wall and decided to start walking away from the terminal, and towards the city and boy were we glad that we did! 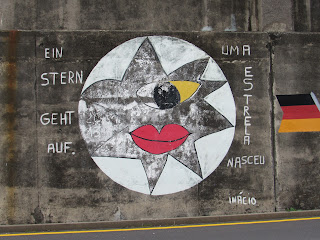 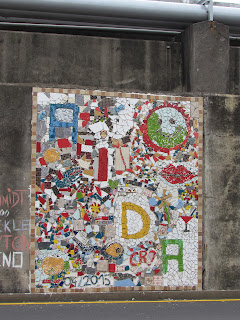 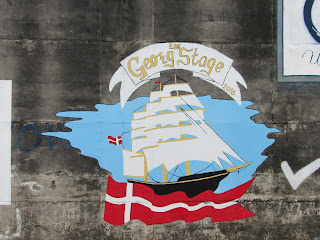 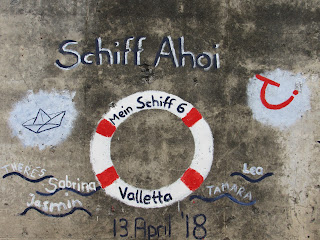 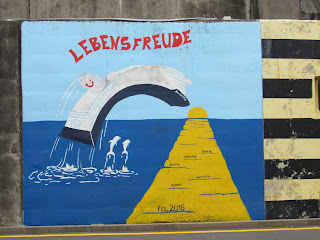 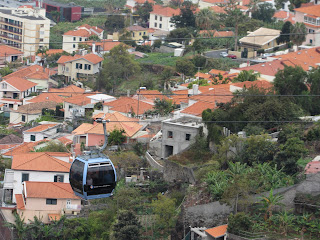 The first young man that we came upon spoke excellent English and asked if it was our first time on the island. We asked him if he did tours and he said yes. He showed us what he thought was the best use of our time, and when we figured out that he was going to be our driver, and that he was not going to put us into a cab with a non-English speaking driver we were all in! Again, 80 euros for a four-hour personal tour! He was the second cabbie that we tipped.

The first place that he took us was up a steep, winding road with homes built all over the hillside. We stopped at a vista point and looked out over the port and town of Funchal.

On a side note, the name Funchal was given to the island by the first settlers that landed on its' shore due to the abundance of wild fennel. The Portuguese word "funcho" (fennel) and the suffix "al" was used to denote a plantation of fennel. Pretty cool, huh? 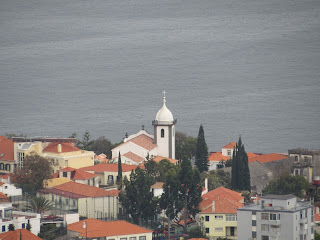 After taking a few photos, we continued on up the hill to the top where the Village of Monte is located, on the outskirts of Funchal. There was a church at the top which I entered and found that mass was actually taking place, as it is Sunday. It was a very quaint church which was nearly full of worshippers.

Just below the church, we enjoyed watching people toboggan down the HUGE hill in wicker sledges, also know as baskets. It was many decades ago that this was the established mode of transportation between Monte and Funchal and how people brought food and goods down from the top of the mountain, to the village below. Of course, back then they had to carry their sledge back to the top, on their back. 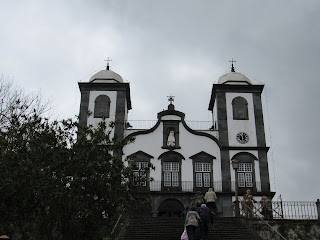 If there hadn't have been such a long queue, I MAY have given it a try! lol 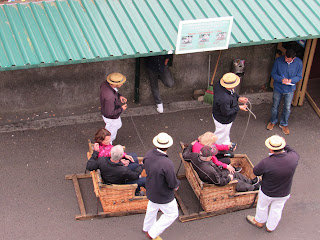 After watching them for a while, we hopped back into the cab and followed them down the mountain. It was quite exciting to watching the guys on the back of the sledge maneuvering them down the steep hill, around corners and through intersections! 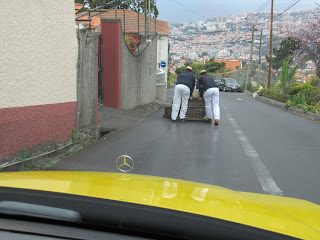 Eventually, we took a left and they kept right, and we headed another direction, to another vista point, Miradouro; Pico dos Barcelos which had an incredible view and a fabulous cafe at the top. We had the most delicious pastry thing. It tasted like a filo dough cup, filled with the best custard that I have ever eaten! It was so good that we ordered a second one; they were only one euro and it was then that  I decided it was a good thing that I did not live there, as I would become very FAT eating the special little custard cups! 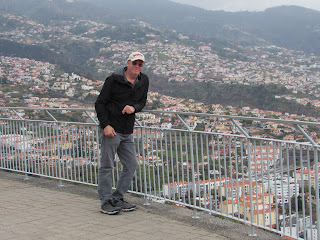 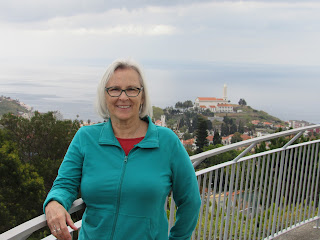 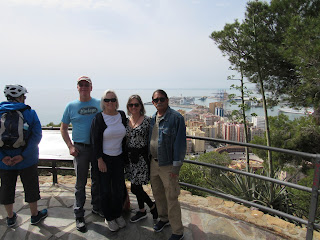 After lolly-gagging around and eating and looking at the view and flowers,  we headed to a small fishing village, Camara de Lobos, a place where Sir Winston Churchill created many beautiful paintings. The village was chock full of small fishing boats making it picturesque and charming.

One of the boats had the funniest looking things hanging on lines, all over the entire boat. When I inquired what they were, I was told that it was salted cod, stretched and salted and left to dry. Looking at the hanging fish, I thought that they looked more like small animals, maybe bats, than fish.

We did a little bit of shopping and bought another deck of cards, a sweater for me, and a wallet for Joe. I could have spent the entire day in that fishing village, but being that we had to be back on the ship on the earlier side, we headed back to the cab with our wares.

Pablo told us we had one more stop. I was secretly wishing that we were going to be heading back to the ship, as I was pooped, but he was not going to allow us to miss the last stop. After a short distance, over a bridge and through a tunnel, we arrived at Cabo Girao, the highest sea cliff in Europe!

It is also the second highest sea cliff in the world, and it has a glass-bottomed overhang, jutting out over the cliff. I do not know why it felt so scary to walk out on that Funchal, Madeira (Portugal), but it did! The tower bridge in London did not freak me out nearly as much as this one did!


I think maybe because it was SO very high above the ocean below. Looking over the side, you could see gardens planted along the beach, and the waves crashing just below them. I was now secretly glad that I did not miss this last stop!

Tonight after dinner we are planning to watch the magic show and get ready to have a nice long sleep, with a totally relaxing sea day tomorrow!

I hope you are enjoying my crazy trip, and I hope to inspire you to get out and take one of your own! I would love to hear about your travels, too!