Electronic Medical Records can be a true blessing when you have a chronic or serious medical condition and either travel a lot, or move to a different location. By having your medical background stored by an electronic health record method, your new doctor can easily access all of the medical information that he or she needs.

With all of the advances in internet technology and medical advances, having a patient’s medical history readily available and easily accessible is very advantageous for the patient. Just think, if you are on vacation somewhere and need to have an emergency appendectomy, it would be extremely helpful for the medical staff that is treating you, to be able to view your medical history for allergies, current medications and other medical conditions that may help or interfere with your care.

When hospitals and doctors use electronic medical records software it not only cuts down on their costs, but also helps to promote accurate medical records for patients.

As I search for a new doctor here in Boise, I am hoping that all of my medical records can be electronically shared so that both my new and my previous doctor are able to keep me healthy for a very long time!
Posted by Michele at 2:55 PM 2 comments:

So, "We Loaded Up the Truck and Moved to Boise!" 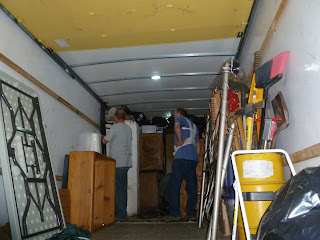 In many ways it seems like just yesterday that I left Boise, Idaho. It was almost three years ago to the day that I took a leap of faith and moved to southern California to nurture and explore a relationship with Joe. You see, we had met only six months prior, at a dance convention in Palm Springs; he lived in southern Ca. and I lived in Boise. I had been single for eleven years and he had been single for sixteen. We tried the long distance relationship “thing” and decided that we wanted more. He knew that he was going to retire in three years, and also knew that he wanted to leave southern Ca. I knew that I was part gypsy and could easily adapt to new surroundings quickly, but also knew that I really wasn't a “southern California girl” at heart. So with the promise of only having to be there for three years, “we loaded up the truck and I moved to Simi!”

Here it is three years later; I have spent two years suffering from drastic side effects from the antibiotic Cipro, and have been diagnosed with Leukemia. I am not sure why, but Joe has hung in there with me and we are now headed back to Boise, Idaho; a place where we have grown to love from a distance, with unbelievable friends and welcoming dance community. We have already taken a sixteen foot truck to my house in Nampa, Idaho and are currently loading and taking a twenty-six foot truck to the new house. Yes, that is forty two feet of crap to load and unload! I am certain that we could probably dispose of about twenty feet of it, but I suppose that will happen as we unpack.

Joe will be driving the twenty six foot truck and towing his car; you might think that it would be easier if I just followed him, but if we did it that way, it would take us a week to get there! I can’t seem to drive more than two hours these days and I am already quite exhausted from all of the weeks of packing. Fortunately Mike and Fran offered to help us load the truck and get the house ready for the new owner; without them I don’t know what we would have done! Fran was even kind enough to drive to LAX with me while I dropped off my son, on Saturday night, to go on his mission trip, to El Salvador. It has been a busy time with much going on.

The packing days were long, the loading days exhausting, but we finally got underway at about noon on Monday. It seems that we wanted the world to know that we were leaving southern California, to begin our new life, because as we were headed toward the freeway, we kept hearing “beep, beep,beep”……we finally realized that Joe’s car alarm had been beeping for miles! We pulled over and headed on down the road. Nothing like making a grand exit!

The drive was quite uneventful for about five or six hours and then we hit a wind storm that lasted for hours on end; wind and dust everywhere. Eventually we came to a teeny, tiny town with hundreds of cars and trucks parked everywhere; it seems that there had been an accident and that the road had been closed for five hours. Luckily for us, we got there at the tail end of the shut-down and only had to wait about 45 minutes before getting back on the road. Our eleven to twelve hour drive was looking like it was going to turn into a thirteen of fourteen hours.

Once back on the road, it was amazing how quickly all of the cars and truck dispersed; it seemed that we were all alone, in no time at all. We pulled into Winnemucca at about 2:00am; tired but none worse for the wear. We slept like the dead and woke up to a snow storm! Yes, a snow storm in June; first a wind storm, now a snow storm. We decided to have breakfast; a breakfast that was included with our room. We figured it would be cold cereal and pastries but were delighted to find just about anything that we wanted to eat, including waffles! Go Best Western in Winnemucca, Nevada!

After breakfast we decided to hit the road since the snow did not seem to be sticking. Eventually we drove through the snowstorm and into beautiful clear blue skies full of sunshine. This lasted about two hours and out of the blue came the hail. Hail, and wind and rain; go figure, now we had seen it all! Was this an omen or just a test, I am not really certain, but we arrived safely and unscathed. The weather in Nampa was beautiful and other than a few minor snags that arose from selling and buying a house at the same time, everything else was smooth sailing. We even had three days in which to relax and prepare for the next big adventure; moving into our new home! God is god; and life never ceases to amaze me. It seems as though there is never a dull moment!
Posted by Michele at 4:04 PM No comments:

Why They Haven’t Cured Cancer Yet

Since being diagnosed with chronic myelogenous leukemia, 15 months ago, I have spent many hours researching cancer and its’ treatments. What I have found, is that the opinions and beliefs vary drastically and that there is no real clear cut answer.

One common belief, is that one of the most difficult reasons cancer cannot be cured, is that most cancers do not act and spread like “one” disease; they actually spread as though they are many diseases, with very complex mutations. CML is one of the rare cancers that they have actually been able to narrow down and pinpoint the actual mutation that takes place and causes the cancer.

Because of this single mutation, which can change, researchers have been able to develop a medication to prevent this mutation from occurring, thus blocking, or inhibiting the mutation to occur. BY doing so, CML is now considered a manageable, or treatable, cancer. This does not mean that they have “cured” the cancer, it only means that they are taking a huge step in the right direction and will hopefully be able to apply this technology to other cancers.

Here is a chart reflecting the past 50 years of survival rates from the American Cancer Society:


Just a quick update to let all of you know that my absence has been a combination of moving, having no internet, unpacking and being just too darned exhausted to keep you filled in. So I just wanted to let you know that I am A.O.K! We have been blessed with help from friends and our new neighbors have been doing a good job keeping us fed!

I am working as hard as I can, without “over-doing” it too much! Lol!  Look for more detailed info next week. The other posts are posts that I am writing for hire, so while there may be some good info in them, they are not usually “too” personal.

Thanks for writing and thanks for caring; I am here and well.
Posted by Michele at 11:16 AM 11 comments: