The Continuing Leukemia Saga: A Visit to My Gynecological Oncologist

The February 1, 2011 insurance date did not come to fruition, they said it would probably be March 1st. Knowing that I had this eye issue, I kept my 6 month appointment with Dr. Ernest Han, my gynecological oncologist. I had borderline ovarian tumors in 2004 and have been following up with him ever since. I did not have cancer and with the exception of surgery, I have had no other treatment. There has never been any recurrence of the tumors.

On February 8, 2011 I began my visit with Dr. Han with my bleeding eye story. I continued that I have also had headaches fairly regularly for the past month or so. I also told him that I had been having some night sweats and wondered if my hormones might be out of whack. While I was on my “whine” soapbox, I also mentioned that I seemed a little more tired than usual and that I seemed to be a bit short of breath when I danced. And oh, yeah, the bruising! I seemed to have more bruises than usual and some kind of a rash. And yes, I checked my bed for bed bugs! And one more thing, since I am on such a roll….Super Bowl Sunday Joe made and awesome dinner. I took about 5 bites and was so stuffed that I couldn’t go to bed until midnight. I felt as though I had just gotten up from the Thanksgiving table! There, I am done!
Now it is his turn. Immediately upon examining my abdomen he says, “How long has this been like this?”, and of course I say, “What?”, “This thickening under your left rib cage.” “Oh, that….I suppose I noticed that things just didn’t seem to fit like they used to about a month or so ago.” Dr. says, “Well, we had better run some blood work and get a CAT scan.” Of course I am thinking, oh, great, probably one of those tumors that they said might grow back someday. What a pain it will be to have that removed!
February 9, 2011, early in the morning I get a call from Dr. Han. I tell him that I have an appointment for my CAT scan at 2:30 that afternoon. He tells me to cancel it. He says that he has been on the phone all morning with Dr. Elber Camacho, a hematologist. He says that my white blood cell count is astronomically high and that I have leukemia. He tells me that it is imperative to get to the emergency room immediately to be admitted to the hospital. I, of course, am stunned. I ask him if I can drive myself, and he adamantly said “No!” we are afraid that you are going to have a brain bleed.
As my “brain” begins to process this information, I quickly realize that I do not want to have leukemia and be drooling and half paralyzed from a stroke, so I respond with “I am getting dressed now and will be there within the hour.” And that is how one just wakes up with leukemia. And now the journey begins.
Posted by Michele at 2:44 PM 1 comment:

The Beginning of My Leukemia: A Visit to the Optometrist

On January 13, 2011 I had a routine eye exam. I was relatively happy that my eyes had only changed .25 percent that is until Dr. Jon Kat started staring into them with that “bright light”. His first question was “Do you have high blood pressure?”, “No, it is 90 over 60”, “Do you have diabetes?”, “Not that I know of”, “Do you have anemia?”, “I don’t think so, why?, You’re starting to scare me”…”Well, you have blood inside of your eyes”…”Should I be scared?”…. “No, but you should see a retina specialist.” “Great!”
Of course, my first thought was that my eye issues might be related to the Cipro poisoning that I have been suffering from since April 2010. I had severe light sensitivity in October from the Cipro and thought that it might be related.  I went straight to the pharmacist after my eye appointment and told her what the eye doctor said. She said that it could totally be from the Cipro, as Cipro can affect your vascular system. In my own stupidity, I put “Please don’t let this be the Cipro, too” right out into the universe, you see, side effects from Cipro are untreatable. My thought was that if I had anemia, or something else, I could be treated.
Being that my insurance was only hospitalization, I began the process of changing it to include office visits and outpatient procedures. Dr. Kat felt as though I would need them. Several weeks went by and I had yet to make an appointment. I went back to see Dr. Kat in hopes that the blood was gone. He informed me that the amount of blood was “significant” and strongly encouraged me to get my butt and my eyes to the retina specialist.
My insurance was scheduled to go through on February 1, 2011 so I made an appointment.
Posted by Michele at 10:52 AM No comments:

Leukemia; Not one of my 2011 Resolutions! 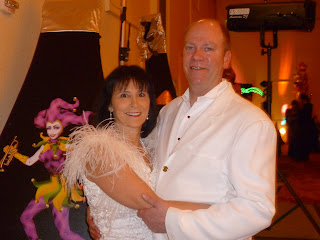 Leukemia wasn’t one of my New Year’s Resolutions, nor was it on my “to do” list. As a matter of fact, it is really screwing with my “to do” list! Leukemia came to me as a surprise; it snuck into my body and has set up shop. It seems as though it is here to stay, so I must learn to accept the fact that I will be living and dancing with cancer.

I keep looking in the mirror and saying, “I have Leukemia”, “I have cancer” and the person looking back at me keeps saying, “That’s impossible”, “It just can’t be”, “I’ve got way too much to do”. Maybe living in a state of quasi denial is a good thing, I am not sure! Don’t get me wrong, I know that it is true; I am doing everything that my doctor tells me to do,  and am researching like crazy!

I must admit that I am more tired than usual and I have to keep reminding myself that this is my “normal” for right now. Resting has never been one of my finer attributes. It is so difficult when you heart and brain say GO! And your body says NO!

Of course I spend a fair amount of time wondering and pondering just what all of this means. I am sure that there is a lesson here and I really want to learn it quickly. I keep saying to the guy upstairs, “Could you please speak louder and clearer, because I’m not hearing you….yet!” It is amazing to me just how quickly life can change. I’ve been privy to it before and I am now privy to it again. Just how does one wake up with Leukemia?

Feel free to join me on my journey, Dancing My Way Through Leukemia.
Posted by Michele at 3:38 PM 4 comments: