Arrecife is the capital of Lanzarote, I believe; it is one of the Canary Islands, a place I have always heard of but never imagined that I would actually visit.

Getting off the ship and walking to the cab area was much easier and much nicer than Casablanca. There were few cabs to choose from and we negotiated a four-hour cab ride, to all of our sites for one hundred euros.

Our cab driver's boss agreed to the price to "make peace" which I believe was a really nice way of saying that he agreed to our price just to shut up the two crazy  Americano senoritas!

We were slightly disappointed that the boss was not going to be the one driving the cab as he spoke better English, but once we got into the air-conditioned Fiat, and the driver turned on the
English version audio tour we were thrilled! Hearing all about Lanzarote while driving from place to place was educational, and interesting. 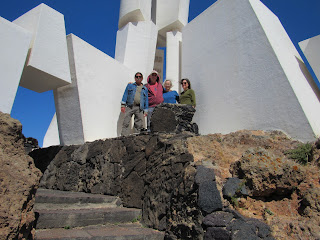 The island was nothing like I would have expected. It is a desert full of lava fields. Much of it reminded me of Palm Springs, many decades ago. It was extremely clean and self-sustaining. They had strict rules and you could tell that they were followed.

It was fascinating driving through the country, it seemed that every square inch was planted with some type of crop, in volcanic ash, which absorbed water from the air and retained it, which was how the plants were actually watered, as there is little rain. There were walls and walls of lava rock dividers separating the crops. It was so very cool! 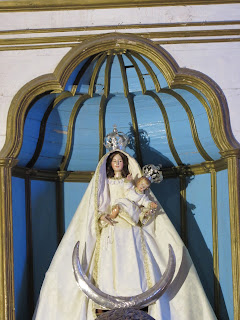 Our first stop was a church and you all know how I love churches! Ermita de Los Delores was a simple, quaint church with two bells on one side and a dome on the other. It was only one room but it was beautiful inside.

After spending a little time in and around the church, we headed for the Parque Nacional de Timanfaya which is a National Park full of lava fields, it is also known as the Fire Mountains. The cost was ten dollars per person for a forty-five-minute bus ride through the park. Not a single one of us had one euro and they did not take credit cards, so the cab driver paid for us to enter the park, and said he would add it to our cab fare, which was awesome!!

As we entered the park there was a long, long line of cars and a sign that said the wait could be an hour. I wasn't thrilled but within a minute of entering the park, our cab driver stuck his hand out of the window, waved at someone up ahead, and took off around all of those cars!! They literally closed the road and let us drive past all of the cars, all of the ways to the top, to get directly on the bus; He was now my new hero! 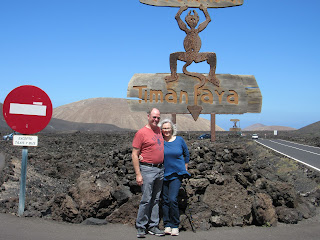 Driving through the park was quite interesting and I wondered if they had filmed things like Lost in Space or moon landings there; it would have been perfect. Once we got off of the bus tour, we saw a geyser shoot up into the air, burned our hands (only a little) on some rocks that were picked up from the ground and watched them cook chicken over this huge, deep pit that had heat rising from the earth. It was 500 degrees Celsius! It was crazy HOT!

After we left the park we stopped where they were taking groups of people on camel rides. These rides were two hours long and were on seats on either side of the camel. Not my idea of fun, but our cab driver pulled over and insisted we got out so he could take our photo standing by the camel. He said that was it was "for free"!  He just cracked me up.

On down the road we stopped at Los Hervideros which reminded me of the Blue Grotto in Malta. The water was so blue in the rock and lava cave that it was hard to believe that it was the Atlantic Ocean. We walked down and around the entire area and enjoyed taking picture after picture.

We stopped at another church which looked the same on the outside, but was different yet also beautiful, on the inside. It was situated in a small neighborhood in Yiza but I do not remember the name. I found it very interesting that every home and building was painted white and the only other paint colors were brown and green which were used as trim.

Our last stop of the day was a winery. I was amazed that they were actually able to grow grapes, to make wine in such an arid environment. The grapes grew in the volcanic ash and were surrounded by a half circle or lava rock. I am not much of a drinker, but the sweet wine that our cabbie scored for us for "free, no charge" was delicious. 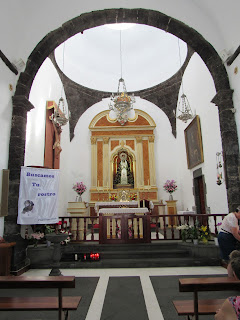 We thoroughly enjoyed the day, and I got a chuckle out of the cab drivers choice of music as soon as we left the winery, to drive back to the ship. Apparently, the tour was over and he was done listening to the audio tour! haha

Once back on the ship we had a little snack, played some cards had a great dinner with our new favorite waiter Barianne, from the Phillipines, and saw a Cirque de Soleil show.

Yesterday was a day at sea, we spent it relaxing, playing cards and reading. We actually even saw a wedding! We ate at the fancy steak house where my filet was cooked to perfection, and when we got back to our room, we had chocolate covered strawberries waiting for us which were delivered to our room from our new friend, the Maitrede Luke, in the French restaurant.

It seems strange to have no connection to the outside world, but I am still writing and will update you all as I can.

Goodnight for now; it was a good tummy day! 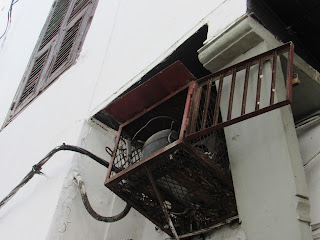 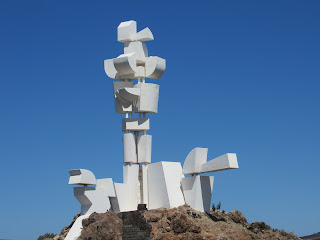 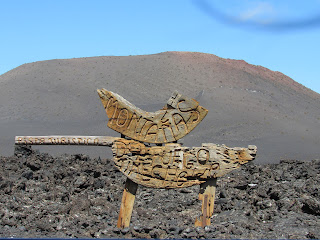 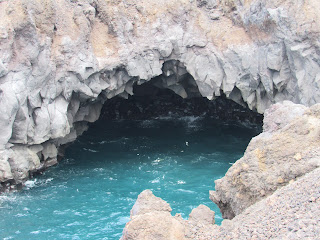 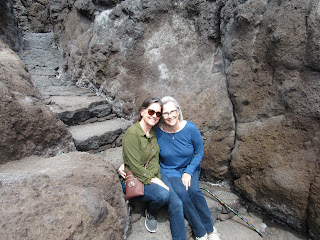 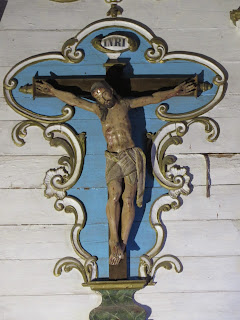 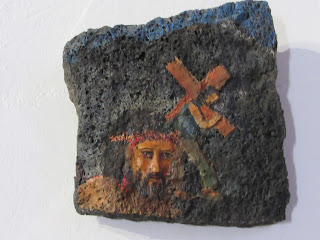 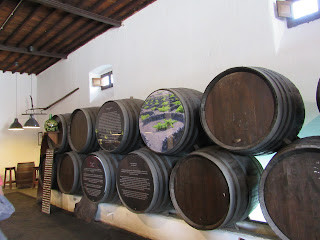 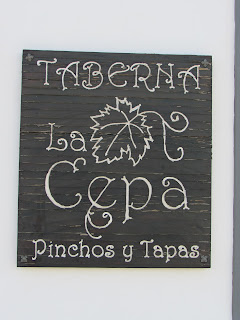 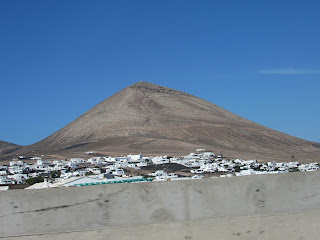