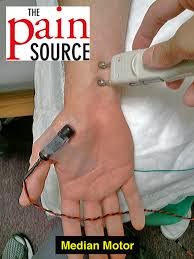 As luck would have it, Dr. Labib’s office called and they were able to rearrange their other patients, in order to make the allotted time available, to do the nerve conduction study and electromyogram. I showed up for these tests and was taken into a room with small machine, which did not appear to be too menacing.  As it turned out, this little machine packs quite a punch!

The doctor’s assistant was going to perform the first half of the test; the nerve conduction study. This study is performed by placing two conductors on two fingers, on each hand. One hand is tested at a time. These conductors look like little springy kind of things; after they are tightened at the base of your fingers, a gel type material is applied to the springy thing on each finger; this acts as a conductor.

Next, they use a pen to measure six inch intervals on your hand and up your arm. These pen marks become the target for the electrical current that is going to be zapping you. I asked the dude if it was going to hurt and he answered by being extremely “PC” and said, “Some people say it does not hurt at all!” I said, “Thanks that is really helpful,” and I wondered how to process this information.

With no time to spare, I am gooped up and ready to go; he takes a device that looks much like a nine volt battery and places it on one of my marks. I scrunch my eyes closed really tight and wait for it…..after a few seconds I open them and say, “What are you waiting for?” He laughed and said he needed to make a few adjustments to the machine. False start number one! 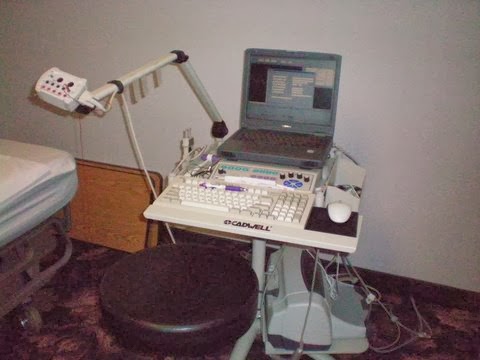 Next attempt is a success; I scrunch-up my eyes again; really, really tight and wait for it; it comes and I scream! Just a short quick scream, but a scream nonetheless, I also kicked my leg up and kicked his machine. Now I am cracking up and apologizing like crazy. He said, “Did it really hurt that bad?” I told him that it did not; and that it startled me more than anything; it kind of felt like when you bang your elbow in just the wrong spot; a sharp, quick zap. He proceeded to move his machine away from my flailing legs.

We continue; me scrunching up my eyes and screeching after every zap. I kept asking him how much longer and he kept saying that “it depends.” What it depended upon was whether or not he was able to get a clear reading of the reaction of my nerves to his electric shock.

At some point, I had to stop him and take a pill for nausea. I really am not too much of a baby, but I have to say that this was NOT a fun test. I am supposing that it lasted approximately forty minutes.

Once he finally completed his study, he told me that the doctor would be in to do the second half of the testing; the electromyogram. I asked him which test was “worse” and he said, depends upon how scared you are of needles! Lol  Well, since I have leukemia, needles and I are old friends; I have gotten very used to being “stuck” so that didn't really bother me, but the thought of sticking a needle into a nerve was, well…..quite un-nerving! HAHAHA 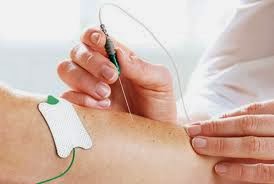 Once the doctor arrived, I asked him if he was going to stick needles into my nerves and he said, “NO” into your muscles. OK, fair enough; these needles are extremely thin and really did not hurt. The only uncomfortable part of this test was when I had to activate the muscle that the needle was in; it was a bit uncomfortable, but did not really “hurt” per se.

I found it quite interesting that I could even detect this tiny little intrusion into my muscle; obviously it doesn’t take much intrusion into our bodies, for our bodies to recognize it. This procedure I found was much more tolerable than the one with the unpredictable electrical shocks, and I was actually even able to observe. I found it quite fascinating to watch my fingers move, completely on their own, without me moving them. Funny how being poked was more tolerable, to me, than being zapped! I really, really do not like electricity!
This test probably only lasted twenty to thirty minutes; I once again survived more medical procedures, courtesy of CML.

It didn’t take very long for the doctor to read my results; no carpal tunnel syndrome; no apparent “reason” for my pain, other than as a side effect of my medication. My blood work was also all in the normal range which simply meant; my pain is solely attributed to my medication; just as I have stated, all along.

So, if you are taking Sprycel and maybe other TKI’s such as Tasigna or Gleevec, and experiencing musculoskeletal pain, cramping and/or pain in your muscles, and /or peripheral neuropathy (nerve pain) then chances are that your life-saving medication is the cause of your pain. Despite the fact that my oncologist has “never seen” numbness and pain in a patients hands from Sprycel, it doesn’t mean that it isn’t, from Sprycel. I suppose that he is going to have to accept the fact that this is another side effect caused by Sprycel, also known as Dasatinib.