Second Day in Brussels; The Rain Finally Caught Us, But We Caught a Princess! 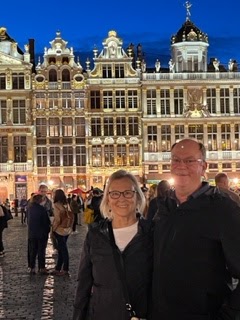 Today started out as a lazy day! Another bath, some yummy coffee, and croissants from the croissant fairy. It was rather dreary, and rainy which didn't make me want to hop out of bed, and hit the streets.

BUT! it wasn't long before the steeples of Brussels began to call my name. We collectively decided to try the City Tour Sightseeing Bus thinking it would be a great way to get an overview of the city while staying dry. Fortunately, the sun came out for a bit, and the rain stopped.

At first, the ride was pretty interesting, seeing many amazing buildings with different architecture, a great view of the city, the Atomium, a Ferris wheel, and many bronze statues of who knows who? 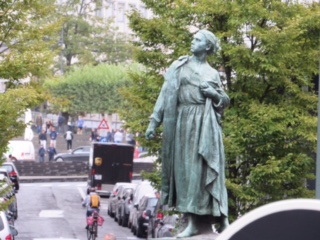 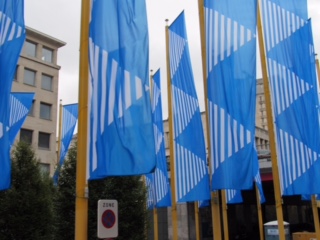 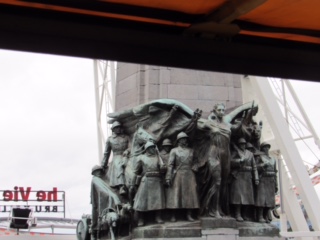 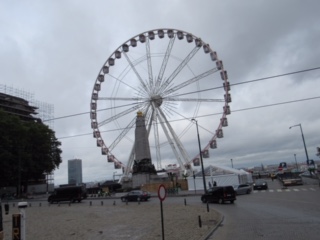 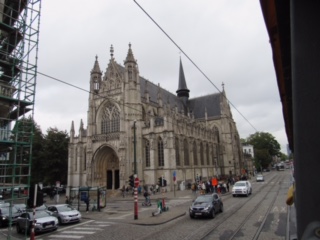 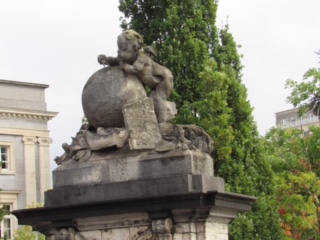 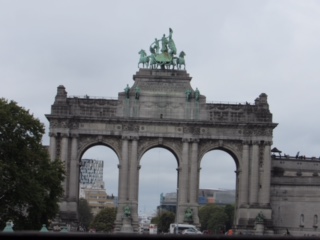 Apparently, the Atomium is the symbol of Brussels that was constructed for the 1958 World's Fair. It is quite impressive, but I am not sure that I quite "get it!?" 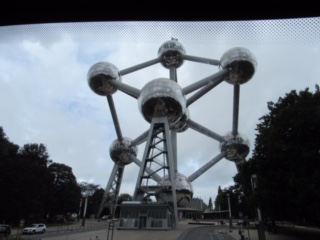 Upon arriving back from the first loop of our tour, the gal selling the tickets told us that Belgium's Princess Maria Laura and William Isvy would be getting married tomorrow, at the Cathedral Of St. Michael, the very cathedral which we were standing in front of. 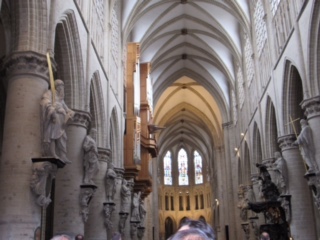 We thought we had better run up and take a look in the church, as it was likely to be closed tomorrow.

As our luck would have it, and you know that our luck is usually pretty darn good, as we have seen many weddings on this trip, who do you think was walking right up the middle of the stairs?

Yup! The princess, her beau, and the wedding party were there for the dress rehearsal. We watched as they went into the church and then came back out, practicing walking up the stairs with a "stand-in" train and princess  bride, showing the little kids how to walk up the stairs. and a whole lot of smiling people milling about. It was pretty cool! 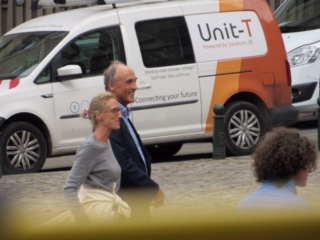 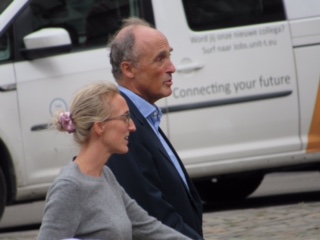 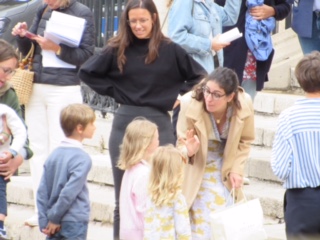 We hopped back on the bus, for the second part of the tour; it was COLD! and windy, and while we saw more of Belgium, I cannot say that I was thrilled. lol 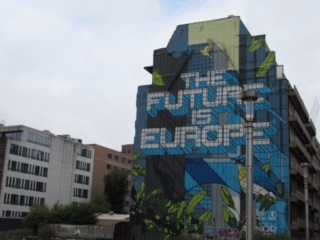 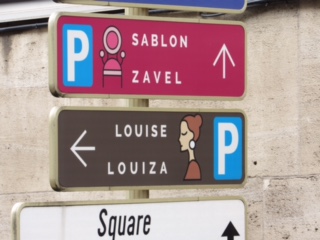 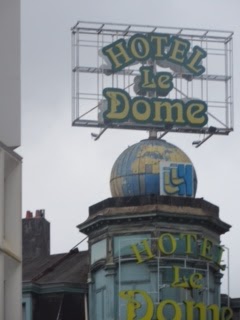 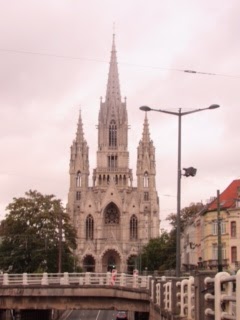 We hopped off, once it was back at the church, and we tried to sneak another peek. We were able to get a few photo shots from afar, but that was it. The church is not one of those fabulous churches that we so often view, and I found the pipe organ underwhelming. 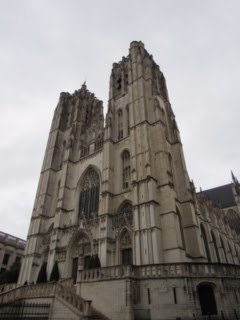 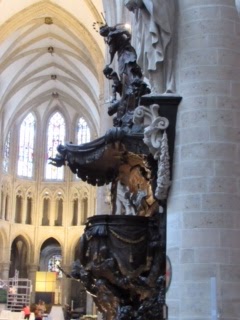 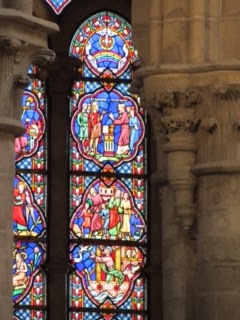 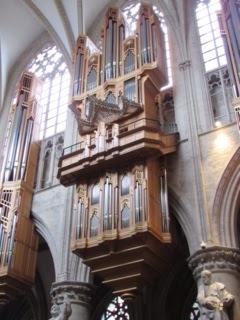 Since we were all cold and hungry, we headed to an Asian Wok place and had a delicious lunch/dinner. I know it doesn't sound very Belgium, but we just weren't in the mood for fries or waffles! bahahaha

BUT! we did eat plenty of chocolate afterward. We found the traditional chocolate seashells, with hazelnut filling the best of the samples, so we bought a few boxes. I am sure there are plenty of truffles and such that are marvelous, too, but they will have to wait for another day!

We perused the streets near Grand Place and headed back to the hotel for happy hour.

We had the good fortune of running into the lovely, young couple, that we met briefly, last night. We figured they probably saw us and thought, "Oh, no! Not them again!" But since they sat right next to us, they were fair game!

We learned that their names were Seth, and Melissa Jo; quite the coincidence since we have two Joe's in our group. We thoroughly enjoyed talking to them about "home", all of our travels, and best of all, their upcoming bundle of joy!

Sometimes God just keeps putting people in your path, and I am grateful that they continued to cross ours.

After closing down the lounge (at 8:30), we headed back to the Grand Place to see it at night; it was spectacular! All of the glitz and glam lit up in the night sky; what a treat to see what is considered "one of the most beautiful places in the world, at night." 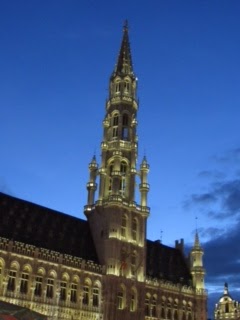 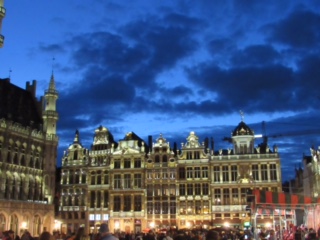 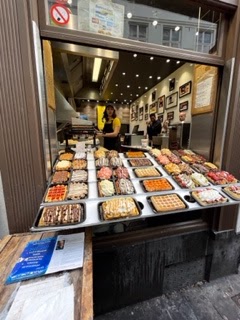 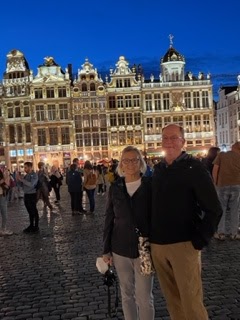 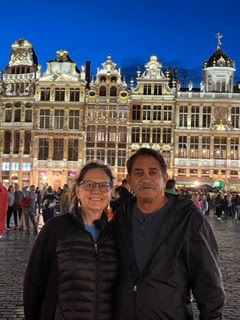 And since we were out and about, we figured that we might as well go and visit Manneken Pis, the "Little Pissing Man", a bronze sculpture in central Brussels, depicting a naked little boy peeing into the fountain's basin. This particular sculpture was put into place in 1618 or 1619, and although the original is now in the Brussels City Museum, this replica has been there since 1965. 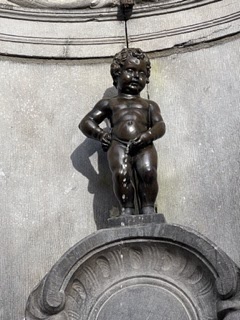 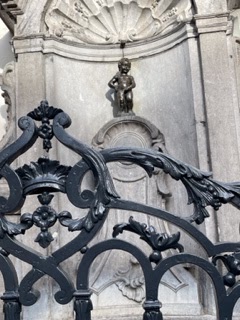 It was a full day, and as always, I am whooped!