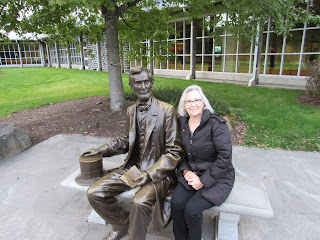 After cemetery stomping for a few hours, with no success, we headed to Gettysburg via Hershey, Pennsylvania. Joe had never seen the Hershey Kiss street lamps, and the detour allowed us to get out of a huge traffic back-up. Well worth the diversion. Man, Has it GROWN!

By the time we checked into the hotel, I was DONE! Thankfully, this Econolodge was actually very nice; plenty of room; a microwave, a fridge and even a sofa, all for $45 a night, a total SCORE. We were even able to enjoy beautiful sunsets from our room.

After a good nights sleep, I was ready to go again. Of course, it was after noon, but gratefully Joe is alright with my late starts.

We are now ready to explore Gettysburg, Pa. The sun is shining, and the temperature is brisk; perfect fall weather. Exploring a new city can be challenging, but what I have found is checking with Google University, before heading out, just to get an idea of what the "major" attractions are is helpful, just to get an idea of what you may like to do, but once I am out and about, my favorite thing to do is to allow myself the freedom to let the wind guide my sail. 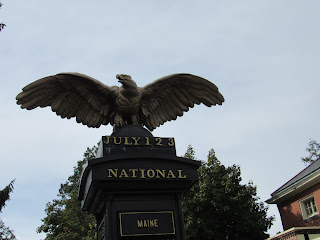 We started out the day heading towards "downtown" Gettysburg and quickly found ourselves right at the Soldier's National Cemetery; monuments, cannons and memorial statues all along both sides of the road; of course, I yelled, "STOP HERE!" Fortunately, there was roadside parking and we were able to get out and walk through the cemetery and battlefields. It was quite surreal to be standing right where Lincoln did, so many, many years ago.

Imagining the battles that took place and the brutality of the Civil War was quite sobering, and so hard to imagine. Seeing the rolling hills, with the cannons facing towards the valley, made me gawk in awe; I just cannot even begin to imagine the carnage that took place, right where we were standing.
We walked around for quite some time, taking in that part of our history, which we have only read about, and gratefully have not had to experience first hand.

After we left Cemetery Hill, we attempted to follow the auto tour, which was marked by signs with stars; we were right on track for a while, but quickly realized that we had not seen a star in miles, so we took a right and headed in another direction. We came upon a lovely apple stand and bought some apples and a jar of beet balls! Thus far, the two apples that we ate did not impress us much, and I have yet to try the beet balls!

From there we drove a bit further down the road and found a great, big, round barn! They also sold apples, plus a whole lot more. It was The Historic Round Barn and Farm Market built in 1914 and is one of only a few round barns surviving today. 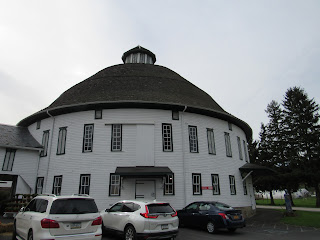 The most impressive part of the round barn was the loft, upstairs; a perfect place where they hold weddings and events; I would have loved to waltz around the top of the barn on that wooden floor!
On our way out, we bought some wasabi peanuts and pumpkin fudge; both were AMAZING!!

Since it was obvious that we had veered off of the "Auto Tour" we headed back into town to visit the Shriver House. Touring old historic homes is something that we both enjoy and hearing the stories of the people that lived in them makes them that much more special. I loved hearing the story of the Shrivers, and how the war affected a wealthy, civilian family, living in Gettysburg at that time. I would highly recommend this tour if you are ever in Gettysburg; it is both tragic and triumphant. 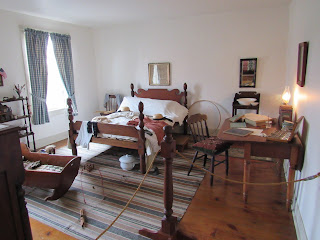 After finishing the tour, we had just enough time to drive over to the Visitor Center and watch a movie on the Civil War; A New Birth of Freedom, and view the Gettysburg Cyclorama. The cyclorama was impressive, and I mean IMPRESSIVE painting of the battlegrounds of the Civil War; it was painted in France, by one artist and 13 assistants, in eleven months time.

The painting is the largest painting in North America; it is 360 degrees, and 42 feet tall, and 377 feet long. It truly is a masterpiece and appears to be 3D. I could have studied it for hours, but unfortunately, we were shooed out after about 15 minutes.
The museum was full of artifacts, but we had little time to rush through, so not much to report on that front. 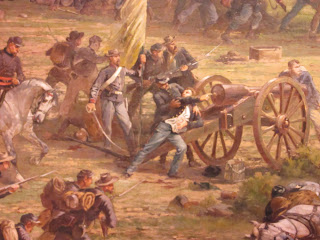 We ended our day in a most excellent fashion; at the Dobbin Springhouse Tavern. The tavern is the oldest standing structure in Gettysburg, built in 1776. It was built above three natural springs, which were used for water and refrigeration. You can still see the flowing spring when you venture down the stairs.

We actually opted to eat downstairs in the less formal section of the restaurant as it seemed much more cosy, and more to our liking. It was dimly lit by candles on the table, and all of the wait staff was dressed in period clothing. There are two fireplaces built into stone walls and the dark wooden bar, built in 1818, spans the entire length of the room. It was like entering a tavern from years gone past; full of charm, history and a buzz of excitement that adds to the atmosphere. One cannot help but imagine weary travellers gathering here for a bite to eat, and a pint to drink. 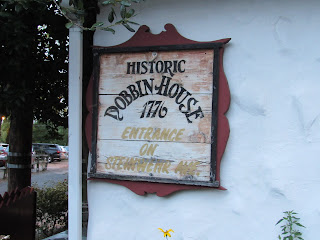 The food was amazing; I highly recommend the filet, the crab cakes and the chicken pot pie! When we arrived, we were told that there was a 30-minute wait, we decided that it would be worth it, so Joe gave them our name.

But, me being me, I noticed two seats at the bar. The only problem was that there was an elderly gentleman sitting right between the two seats, an empty one on either side. It didn't take me but a few seconds to ask him if we could scoot him one way or another, and he kindly obliged.
We quickly began chit-chatting and became friends. We found out that he had lost his wife about ten years ago, and had been travelling alone, ever since. He was from Scottsdale and headed to DC the next morning.

Eventually, we added another diner to our little group. He was from Alabama, and it didn't take long for me to drag my southern drawl out of the archives! We enjoyed each others company immensely and our new friend, Ray,  thanked us for making his night so very special. Sometimes, taking a leap of faith makes everyone's heart happy!

Tomorrow we head to Lancaster; Thank you, Gettysburg, you were a pleasure! 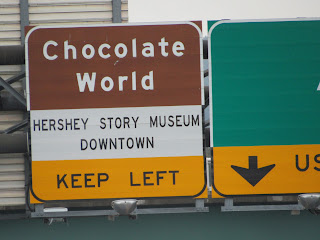 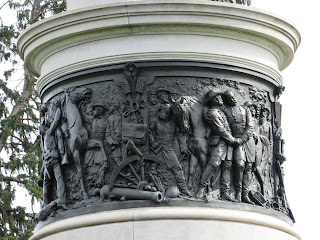 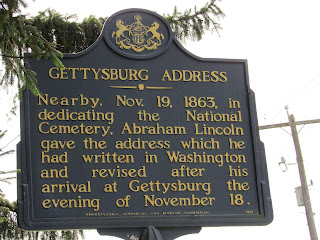 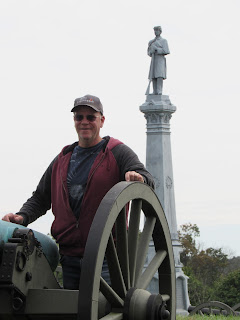 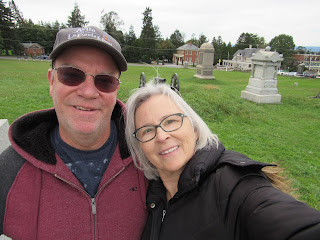 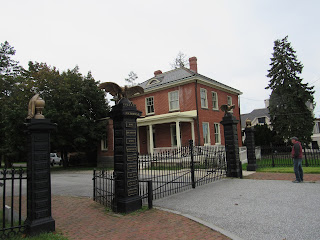 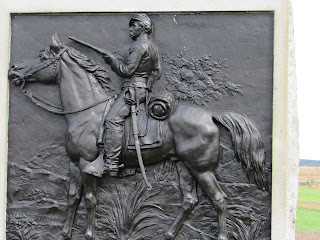 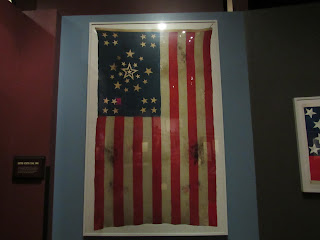 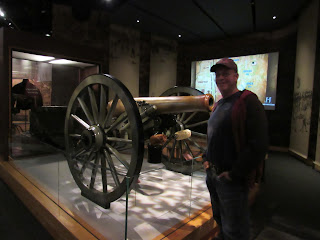