Last Day on the Ship; Off to Rome AGAIN!

Well, after a very, very busy itinerary, we were all looking forward to a relaxing sea day; sleeping in, playing cards, hanging out on the deck and watching the water go by. I was also looking forward to exploring the ship a bit more, before departing, since I had seen so little of my "home" for the past ten days. 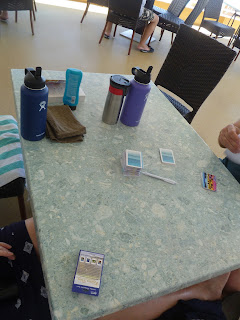 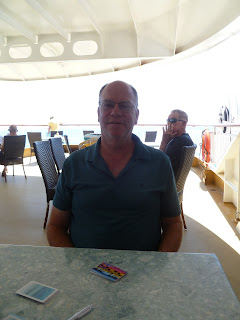 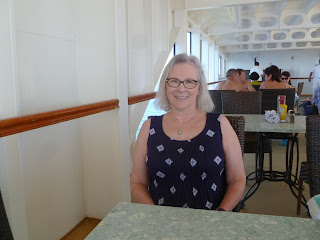 It was shortly after lunch, as we were sitting in our quiet corner on the deck playing cards, that the captain spoke to us over the loud speaker; apparently they were expecting bad weather, up ahead in Civitavecchia, so to avoid rough sailing and the possibility of not being able to dock the ship in the port, they were going to pick up speed and get there earlier than anticipated; and I am talking A LOT earlier, like a whole night!

Now I don't know about you, but for me, I LOVE sleeping on a ship that is gently rocking, and I enjoy watching the water go by, and the feeling of being out in the middle of the sea, with no one else around, so this did not bring joy to me! lol We were all looking forward to the last "sailing" day, as we only had two, the entire eleven days on board, but it didn't look as though that was going to happen. 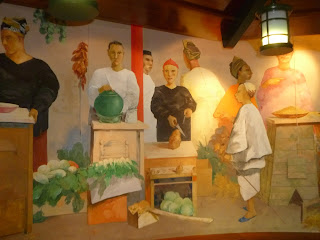 Despite the fact that it did not seem as though the ship was moving very fast, we arrived in port while we were eating dinner; this meant no shopping and no casino, which wasn't a huge deal, but since it was my first night of real exploration, I might have enjoyed those things; and to mention, there is something magical about walking around the deck of a ship, as it is moving through the water. It is just not quite the same, when parked!

They told passengers that they could leave the ship, with a 2 am curfew, if they wished to get off and explore. Since we were an hour from Rome, and there didn't appear to be a whole lot to see in Civitavechia,  we stayed put. I, for one, had done ENOUGH exploring during the past ten days.

So we carried on, as if we were still sailing....

It seemed appropriate that we were having dinner at Cagney's Steak House, on our last night, as we started out our journey the first night, also at Cagney's. I have never paid extra for the specialty restaurants on cruise ships before, but since we got in on a promotion that included four specialty dinners, we of course indulged! 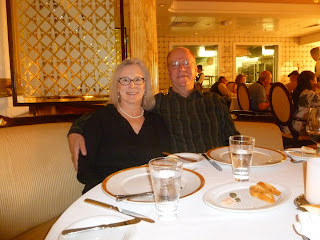 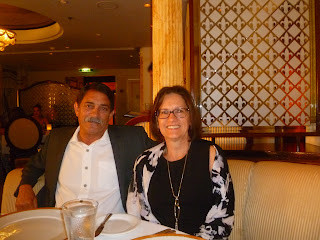 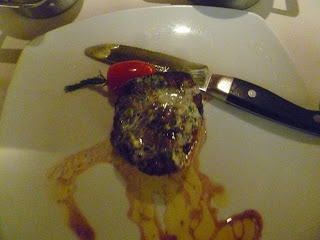 What I can tell you is that there really and truly is a difference! The meals at Cagneys, and Le Bistro (the French restaurant) were amazing! Not that the food wasn't excellent at the "regular" dining rooms, because it was, but the food at the specialty dining rooms was top notch; I am talking Ruth's Chris, Chandler's, Morton's, Flemings and Mastro's good!

Dining in these specialty dining rooms was an experience and we all made the most of it; leaving stuffed to the gills, with dessert as take out, for later. It was an extra special way to spend our last night on the ship, together. 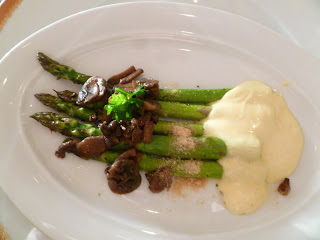 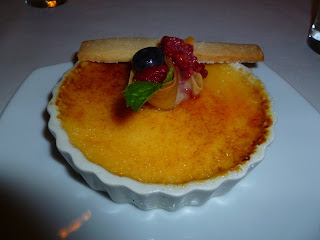 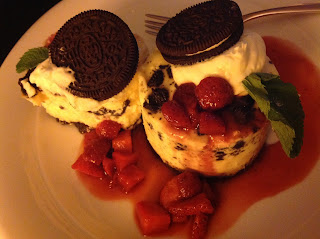 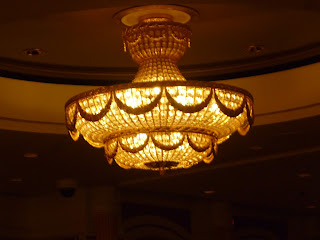 After dinner, we all went for a stroll around the ship, eventually finding ourselves in the lobby area, which as it turns out, was a great place for photos. We took a few photos, and then I took the opportunity to have the "obligatory" gratuity charged removed from our bill, so that we could properly tip our own personal room steward, and the waiters that frequently waited on us, that gave us excellent service.

I hate when they try to force you to pay gratuities that you have no control over; I much prefer "tipping" directly. Oddly enough, we saw that even after they removed those gratuities, we had a credit on our account; a bit confused, as we had no idea what it could be for, we wondered what would happen to the credit. (When we got home, we found that they had sent us a check, in the amount of $92.73. We have no idea what it was for, but heck, we deposited it! Thank you Norwegian!) 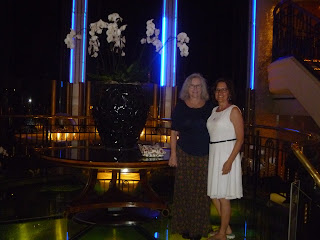 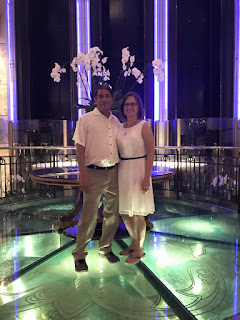 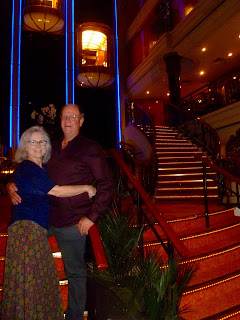 We didn't stay up too late, as we once again had an early morning. We had to get off the ship and to our hotel; and then we were going to into Rome....AGAIN!

Thank you Norwegian Cruise Line for an amazing cruise! 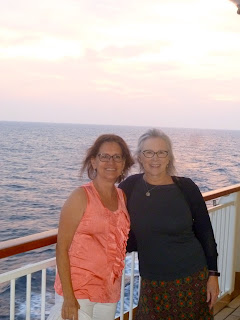 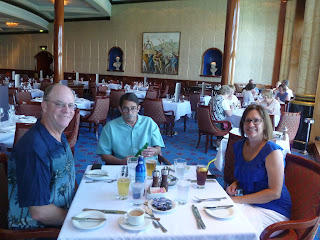 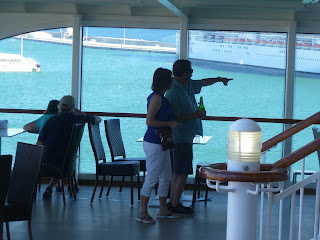 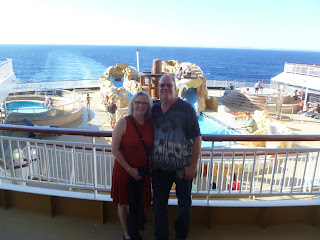 Somewhere along the line, I realized that I had made travel booking error; I booked our hotel, at the same hotel as Cindy and Joe, but didn't realize at the time that we were flying out of Ciampino, NOT Fiumicino; not that it was a huge deal, as there is little in Ciampino, but it did mean a 30-45 minutes taxi ride, the next morning; thank goodness our flight was not too early! 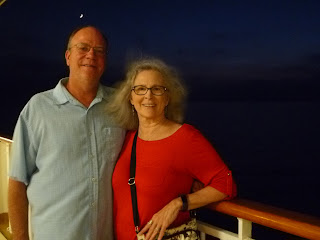 When we got off the train, we started following the signs toward transportation and hotels. Eventually there were only hotel signs, so we kept on walking, and walking and walking......eventually we saw a hotel!! A HILTON hotel....the WRONG Hilton hotel.

Since we were staying at a different Hilton, a few miles away, you would have thought that they would have just taken us over to their other property, right? The guys went and asked the girls at the desk, and they told us that we had to go BACK through the airport the the hotel shuttle area to get the Hilton GARDEN shuttle, to the correct hotel; I was NOT a happy camper, not to mention, I was already pooped and the day had barely begun.

The guys went to the bathroom, and I looked out and saw TWO shuttle vehicles just SITTING there!! I was more than annoyed and went to talk to a group of older men, yacking behind a different counter; I told them of my plight and three of them said "sorry".....but the fourth one took pity!!!
He said, "Come on, I'll take you over there right now!" Needless to say, I was more than overjoyed and you should have seen how quickly Cindy and I slammed ALL of our luggage into the back of that shuttle! 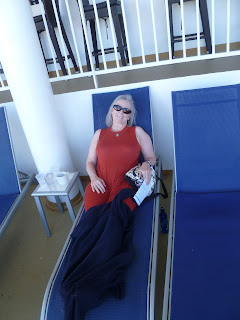 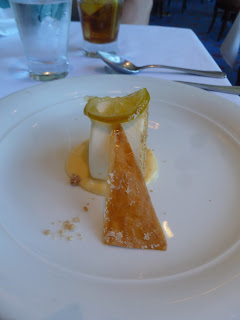 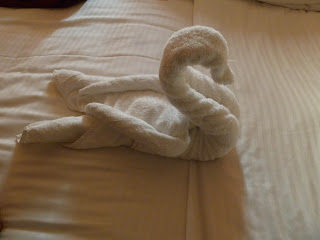 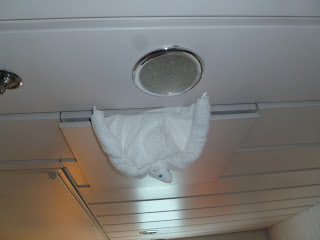 Just as we finished putting the last suitcase in the van, we realized that the boys weren't back yet! Afraid to screw up our ride, I went as fast as I could down the hall yelling, "COME ON!!! We have to go NOW!!" It was hysterical, but we got there in record time and tipped the driver handsomely!
Now, checking into the Hilton Garden was also NOT a treat! They took FOREVER and then told us we could not check in because we were two hours ealry, and our rooms were not ready. However, for $55 euros, our rooms would magically become available and we could check in.

HAHAHAHHA...who did they think they were fooling??

We asked them to store our bags, which they agreed to, and headed to the city for the day.