Today worked out to be another taxi day for our group;  there were tons of taxis lined up just a short distance from the ship, and as expected, we were bombarded with offers, for all kinds of different excursions, from all kinds of different vendors, as soon as we approached the vicinity. Since we pretty much knew what we wanted to do,  we asked how much to the Olympic ruins and were told 80 euro, to get to the ruins (about an hour away), and an hour at the ruins, and back, which was AOk with us, especially since we split the cost with our friends; to do this "excursion" through Norwegian, it would have cost us 90 euros a piece. 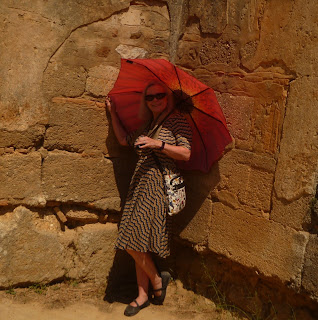 In typical taxi line seniority fashion, they tried to put us in the first small car in the line. We quickly said no; that was not acceptable to us.We told them that we wanted a Mercedes, as it has much better air conditioning, so they took us a few cars back; to the first Mercedes in the line.  I am sure we pissed off a few drivers by doing that, and we weren't done yet! When we asked the Mercedes driver if he spoke English, and he said no, we declined THAT taxi, too; much to the non-English speaking driver's dismay. We wanted an English speaking driver, so we went to the NEXT Mercedes;  when he understood our English, and replied in English,  we told them, that we chose him; about six cars down the line. 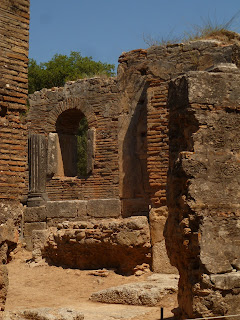 I am sure they all were quite annoyed with the picky Americans, but we did not care! It was sort of like musical taxis, we had learned our lesson the hard way; a cab with so-so air-conditioning is no bueno; besides, we are the ones paying the fare, and we know how important a good taxi, and driver can be, to our day. 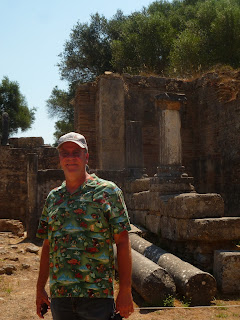 Our chauffeur, Nicoli was a good driver, but not nearly as good as our Marcos’! He would answer questions, but did not give us a running commentary, like our previous drivers had, in the past. I am not sure whether he wasn't as knowledgeable, friendly or just didn't speak English as well as our previous drivers; but thank God, he did have GREAT air-conditioning! 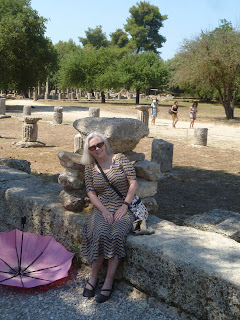 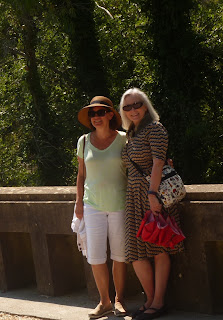 He drove a little on the fast side, and said that he knew where the policia hung out, so he would slow down in those areas, and then speed back up; this resulted in us getting to Olympia in record time, which gave us an extra ten minutes at the ruins, which turned into an extra hour and ten minutes, as the ruins were amazing. 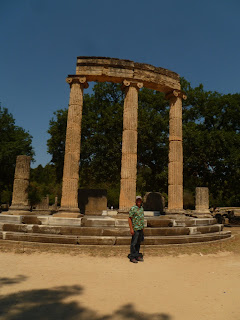 All four of us were wishing for more time, in order to go to the museum, so the two Joes' hiked back to the cabby, to ask if he would wait another hour; for a price, of course;  he wasn’t thrilled, but did agree. He was most likely hoping to get back in time for another, larger fare; but isn't a bird in the hand, worth two in the bush? 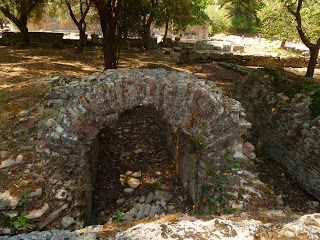 Cindy's Joe came back down to where we were waiting, to tell us the news,  and Joe rode with Nicoli to the place he was going to pick us up, after we went to the museum, so we would know where to find him.  We were all grateful for the extra time and thoroughly enjoyed the museum; the artifacts were fascinating and fabulous. 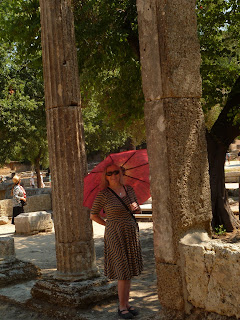 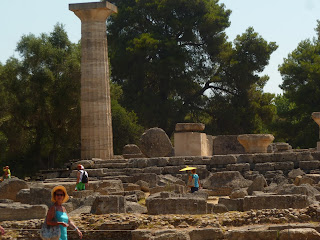 Seeing the Head of Hera, and Hermes of Praxiteles was breathtaking. Observing Nike by Paionios, makes you wonder whether or not the Nike logo/emblem of sportswear and shoes, was inspired by the curvature of the robes on Nike; I mean think about.....the first Olympic games....running shoes.....sportswear....and that little curved emblem?  hmmmmm.....I call inspiration. I was truly amazed at what had been recovered, and how they reconstructed what they had, to give you a real idea of how this historic site actually looked, so many hundreds of years ago. 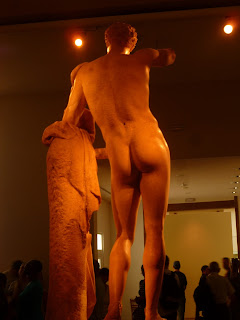 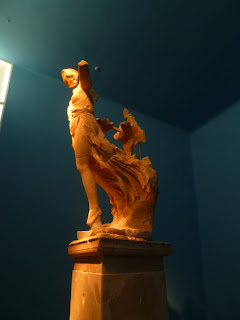 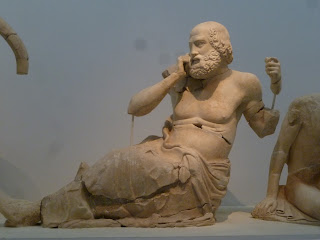 If you are ever to get to Olympia, Greece, where the first Olympic games were held, I would suggest at least two to three hours to explore the ruins and the museum; fortunately for my lungs and legs, the time we had was just enough, although it left me wanting more; maybe a return trip someday, is in order? 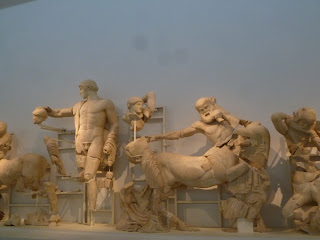 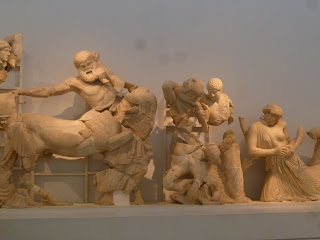 On our way back from Olympia, we asked Nicoli to drop us off in Katakolon for a little shopping, some food and internet. The little shopping area of the seaside village was adorable, and we were quickly bombarded with shop owners, hoping to sell us something; anything, for that matter! 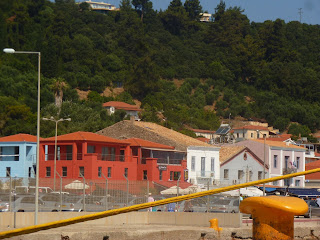 And let me tell you, some of the things that we saw were QUITE interesting and VERY provocative! Definitely not souvenir material for children. We did purchase a few small bottles of local olive oil and soap, and some volcanic soap, as well, but we really are not big shoppers, so we were more interested in the "smells" in the air, than the merchandise in the shops. I did however,  find a six euro, or whatever their currency is, silver ring that I will enjoy, and be fondly reminded of my time, in Greece. 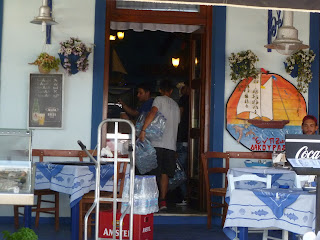 After acquiring our treasures, we decided to follow our noses to a cute little cafe, right on the water. There was an ocean breeze, a fan, internet and an adorable waiter; he and Joe had a great time “making funnies”, and sharing stories of our travels, and his home town. I think this might have been Joe’s favorite day, since getting on the ship; for those of you that know him, it isn't easy to get him to laugh, so we all enjoyed the happy go lucky, full of life, waiter. He was a delight, and left a great taste of Greece, in our mouths and hearts. 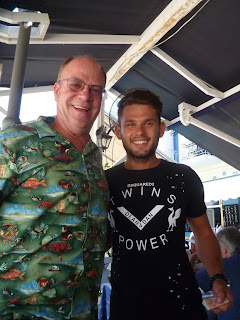 We sat for a few hours, enjoying the view, and the people walking by, not to mention all of the little goodies that our waiter brought out for us to eat. Greek yogurt in Greece, and taziki sauce, is a little different than it is here at home, but delicious, nonetheless; I also enjoying an ouzo, on the rocks; I was the only one brave enough to try it, but I had had it before, so when in Greece; OPA!! A Greek word, used to celebrate life; and we were all certainly doing that! 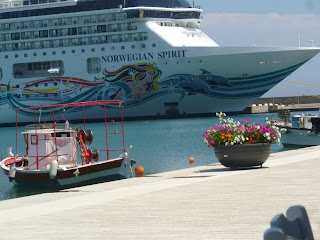 As our time on land was closing in on us, we began our trek back to the ship; I no sooner turned the corner, towards the gangplanks, and a HUGE gust of wind turned my sun-brella inside out; I quickly turned around and the wind whipped it back the other way. As we continued down the path, another gust of wind came out of nowhere, and flipped that poor sun-brella inside out again; this time, there was no hope; it was toast! Thank goodness we only have one more hot day on our agenda. I am going to have to figure out how to stay out of the sun in Malta, but for now, I shall always remember Greece fondly, even though it was the demise of my sun protector! lol 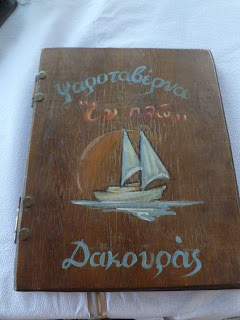 Back on the ship we enjoyed dinner and I even got to do a lap around the outside deck, afterwards; it was my first night of being able to do a little ship exploring. It really was a pretty ship, the smallest one in the Norwegian Cruise line fleet, and I was grateful to be able to see more of it than my cabin, the dining room and the back deck; OPA! 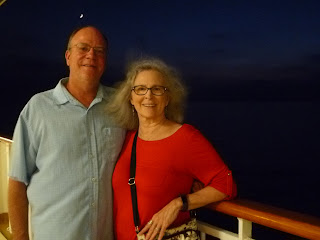 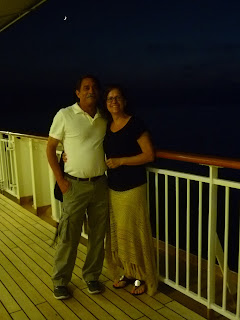 And on to Malta!

PS When the ship pulled away from the dock, it stirred up sand from the bottom of the sea; it made the most fascinating swirls and designs, and there were hundreds of purple jelly fish floating all around the ship; so COOL! 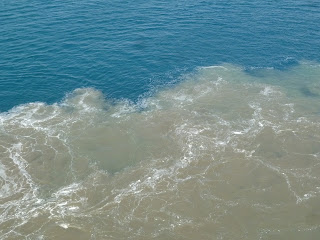 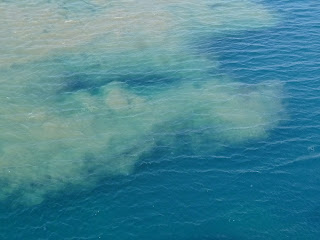 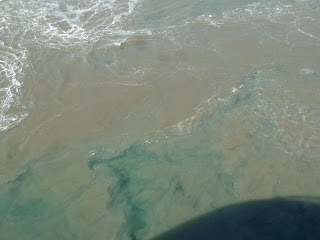 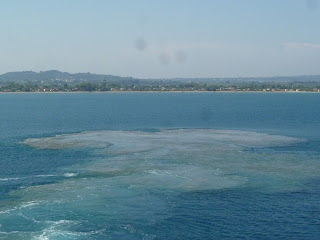