I must have been tired, as I slept quite soundly, which is rare, but welcome. We had no agenda for the day, so the croissant fairy headed out the door, around noon. Oh, how I love having croissants delivered to me, in bed, if I could only get a good cup of coffee to go with them, I would be in heaven. I do, however,  love the insta-hot water pots; the water literally heats to boiling, in seconds. They remind me of an old tea pot that I used to have, many years ago, that I traveled with, because years ago, they did not have coffee pots in hotel rooms. Don't you find it strange that everywhere we go,  they only have Nescafe’ Instant Coffee? 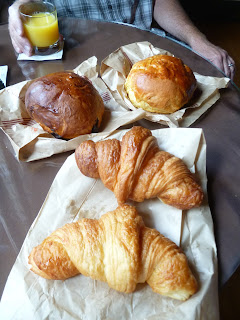 Oh, well, I really have no reason to complain; I am in Lyon, France!

We headed out the door around two, and after speaking with the lovely concierge, we embarked on a walking tour of old Lyon. We walked over a few alley ways,  to the Funicular, rode it to the top, and got out to be greeted by another wonderful accorian playing gentleman, and the remarkable Basilique Notre-Dame de Fourviere. (This is the church that we are able to see from our room) The interior did not disappoint, and once again brought me to tears. I have been blessed in Holy Water, in many churches in France, and prayed in every one, that if it is God’s will, I will come home healed. 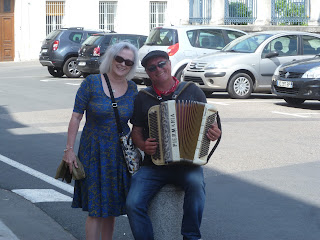 I also have lit a candle for my mother, father and sister, in all of the churches that we have visited in France. Just being in these churches is not only humbling, but moving as well; my tears have certainly replaced the holy water that I have blessed myself with, in volume. 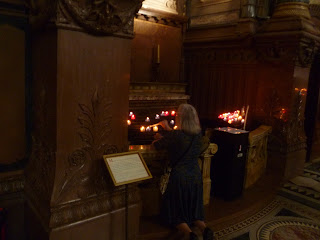 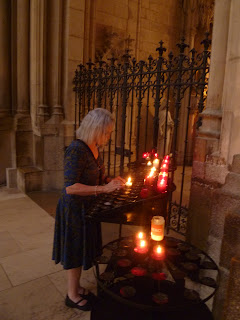 This smaller church of Notre-Dame, is in some ways more beautiful that the one in Paris. It is more circular, with more of a turret feel, where as Notre-Dame in Paris is more rectangular. The insides  of both are spectacular. The church in Lyon, is actually two churches, one, on top of the other; which is quite interesting. The “downstairs” church is less ornate, but still beautiful;  there is also another small chapel attached, which apparently we were not supposed to “visite’”,but did; but just for a moment. I believe that God will forgive me, this small indiscretion! 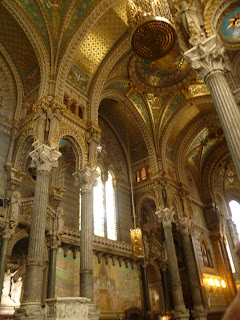 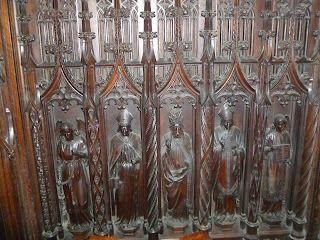 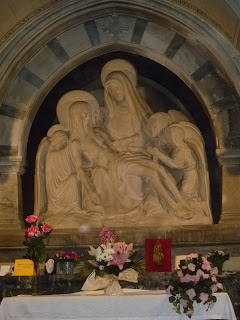 After leaving the churches,  we wandered around in a small courtyard area, and came across the overlook area, and were able to view miles and miles of Lyon; as far as the eye could see. The  church was strategically built,  way up on the hill, to overlook the city and truly is, breathtaking. A sight you would not want to miss, if you were ever in Lyon. 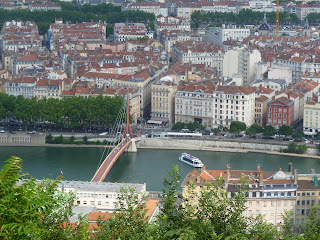 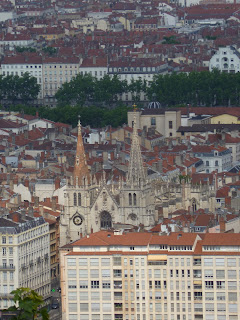 From there, we walked over to the Theatres Gallo-romains; which are Roman ruins that are currently used as outdoor theaters; they were actually warming up, and sound checking for tonights performance, so we were able to hear a little music, as we strolled through the ruins. It really was lovely and reminded me of our outdoor theater, back home, where we enjoy the Shakespeare Festival.

We continued downward, on very steep cobbled streets; while the sights were amazing, I can’t say that my feet appreciated the view; and we did get a little turned around, as there are few street signs to direct us, but it didn’t take long before we were back in “familiar” territory.

We quickly came upon Cathedrale’ St. Jean, the church of John the Baptist, and were every bit as impressed with this church,  as we were with all of the other churches,  we have been in, in France. My mom, dad and sister’s light are shining bright in France, and I swear, my eyes just cannot fathom the beauty, which they have seen. 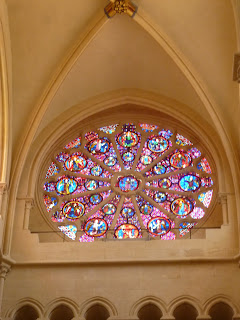 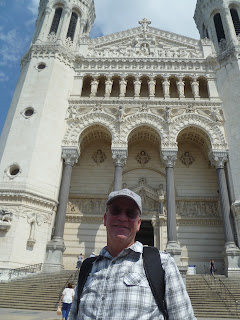 After all of this sight seeing, we were starved! We had made the mistake of not stopping for one of those delicious boulangerie, baguette sandwiches, to bring along, on our jaunt, much to our dismay, but it is a mistake, which we will not make again. There were so many places along the ruins that would have been perfect,  for a picnic.

But for now, we will head back to the room, and dump the backpack, freshen up, and head to dinner. Luckily, we had dates and apples in the room for a quick snack, so that we could get off our feet for a little while.

Quickly feeling rejuvenated, after being in our air conditioned room, we headed out to eat; it was around 8:30 pm. It was still daylight, like back home, and we were surprised to find that not all of the restaurants, were open. After walking through the streets, we decided to stop at a little place that served delicious looking, pizza


We were having a little bit of trouble, with this particular menu, and decided to have what the German gentleman, sitting next to us  was having; he said it was “very-gud”. It quickly arrived and we dove in; it was a pizza with smoked salmon and goat cheese; not my favorite combo, though it was “good”; we will not be ordering that again! Lol  I used to love goat cheese, right up until the time that Joe made goat milk,  custard; the first bite was fine….until I swallowed! Then my mouth tasted as though I had just eaten a wet, stinky goat! No more goat, anything for me! Lol 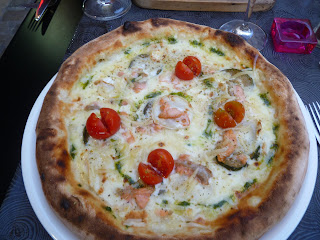 Being that I did not eat TOO much pizza, I had plenty of room for the most amazing Glace’ EVER! I had a small cup of it last night and couldn’t help but order the same, exact thing, again tonight. It was a Menthe de Chocolate’, and when the say “menthe”, they meant it! The mint was SO strong and the chocolate so dark that the combination was out of this world!

I asked for a small scoop, in a cup, and I told the same young gal that waited on me last night, that I had enjoyed it so much last night, that I was back for more; she said, “That one is my favorite; You have good taste, I will make you a BIG cup!” And she did! Instead of one “scoop”, she shoved three scoops of Menthe’ de Chocolate’,  into my small cup, for the same price. Merci Beaucoup!

I ate the entire thing, and instead of burping up goat all night long, I was delighted to burp up mint! Main Mission accomplished.

We then decided to take a stroll across the Roane, to see what was on the other side; it was more of the same charming atmosphere, but seemed a bit more trendy, although still quaint; and still full of cobblestone streets! We may try that side of the river, for dinner tomorrow night. One thing that we noticed was that we were WAY to early for dinner, tonight. After we finished ours, more and more places kept opening up. France is definitely a country that works for my schedule, as I am SO slow moving,  in the morning. 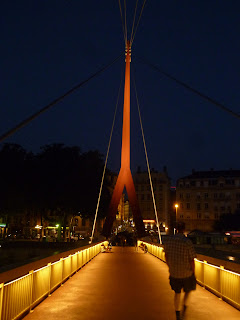 Around 10:30, we decided to head back to the hotel,  and jump into the jacuzzi. It was just what our bodies ordered, and we enjoyed an hour, exploring the spa.

It was a perfect way, to end the day.
A tout a l’heure’: See you later!