Let Us Suck the Fluid from My Pleural Sac!

After being gone for several months, we have finally returned home; it is the end of February and there is still snow everywhere! Maybe we came home, too soon?

As nice as it was visiting with our friends and family, it is always nice to be back in our own bed, in our own space.

Next on the agenda is to have a thoracentesis for the excess fluid that has decided to call my left pleural sac home. This is something that can occur while taking Sprycel, a medication for chronic mylogenous leukemia.

Pleural effusion seems to be the most annoying of the side effects of Sprycel, for me. This is the second time that I am having a throcantesis, in six years. The first one was actually quite easy; they did the procedure and I left feeling great.

This thoracentesis did not go quite as well. I cannot complain about the actual procedure, while it was a bit uncomfortable, it was not what I would consider painful. I knew that I had a very large pleural effusion and was prepared to see a lot of fluid draining into the container on the wall. 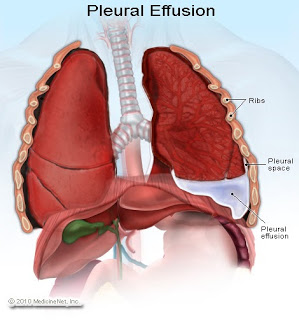 What I was NOT prepared for was the effect it would actually have on my lung and on my body. After the first container was full, a new one was attached to the vacuum. As it reached the 1.6 liter mark, I began to cough intermittently; as it reached 1.7 liters the cough was getting worse and constant. The gal that was keeping an eye on me, tried slowing the flow, to see if that would help, but by the time the fluid reached 1.8 liters, I was coughing uncontrollably.

She quickly removed the catheter in my back. The coughing became almost violent and I had pain in my chest, my shoulder and my neck; this was no fun!

The tech that performed the procedure came in and observed my writhing and continued to monitor me for about an hour. They called in some head honcho guy and he wanted an X-Ray to make sure my lung had not collapsed or suffered any other damage.
It had not.

They explained that the reason for my reaction was the fact that the effusion was so large, and my lung and been so scrunched up, that upon re-inflating, it was very, very angry!! 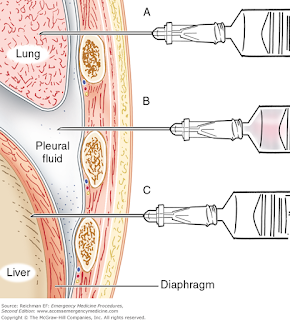 And believe you me, it let me know. The pain continued for several days, mostly when I took a deep breath, and my cough did not go away, like it did last time.

I am thinking that the next time I do this procedure, I will not wait for so much fluid to accumulate; the last one was a piece of cake, compared to this!

Some may ask why I do not switch my medication, and I know that there will likely come a day that I must, but thus far, I have been quite content with my response to Sprycel and my quality of life. Last year, year five, was AWESOME! Hardly any side effects at all, except the PE. Response was all below the optimal .1% and I felt pretty darn good!

So I guess I prefer to stay in bed with the devil I know!

Let's hope this thoracentesis does the trick!
Posted by Michele at 6:51 PM