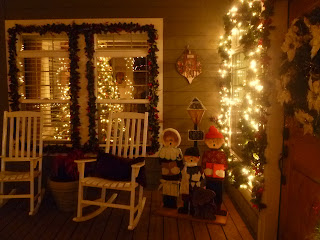 A week ago we left our beautiful mountain home; snow, Christmas tree, decorations and all, and headed south. After moving to the mountains, and hearing stories from the neighbors about the switchback that leads into our neighborhood, Joe traded his Acura for a 4 wheel drive Sequoia. It is a great truck, with a ton of storage space and cup holders! I LOVE Toyota, for that! It actually has an added bonus, besides the 4 wheel drive; Great seats! No more low, tilted bucket seats, and no more bad back.

This truck has captain’s chairs that actually are ergonomically agreeable with my back, so along with the extra space, the 4 wheel drive and the cup holders, we set off for our Christmas travels. First stop San Tan Valley (near Phoenix), via Las Vegas. Typically we drive down the center of Nevada, less traveled roads and far fewer places to stop. This time, because of the possible impending “snow” that was supposed to pass through; we went down around Salt Lake City. This adds 100 miles to our trip, but we thought that it would be safer. 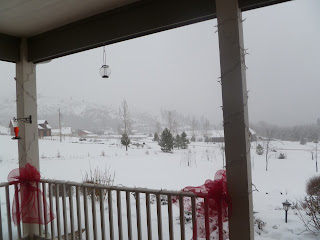 When we left home, the sun was shining brightly and it was an absolutely gorgeous day. As we were cruising along, we felt as though we may have dodged a bullet. But no; the first snowflakes began to fall right around Ogden, Utah. Being the optimist, I figure that we would drive through it fairly quickly. Being the realist, I quickly realized that we were in this one for the long haul! We, or should I say Joe, drove on…… watching the snow plows on the other side of the highway throw tons of snow, in our direction. We waited and watched patiently, inching along for a snow plow to show up, on our side of the highway; to no avail.

As the hours continued to pass, the snow continued to fall. I figured that eventually we would have to drive through this storm, as we were headed south. The snow was a bit frightening, but the 18 wheelers were down-right terrifying. They continued to fly past us, on a road that could not even be seen, at a high rate of speed; I am certain that they were traveling in excess of 55 miles per hour. There was also this little black car, which kept lagging behind and then flying past us; eventually was saw him and another car in the ditch. We also saw quite a few pick-up trucks way out in the fields and several semi’s in the median.

I don’t know what these people were thinking, but it is no wonder why there are so many traffic accidents, in snowy conditions; too many people are reckless, just down-right reckless. It is one thing to be “your big-bad-self”, but it is an entirely different thing, when you endanger those around you. It is incomprehensible to me, how anyone can be so careless and blatantly dangerous to themselves and others, as well.

After eight hours of driving in the snow, we finally hit rain. You have never seen two people so happy to see rain! We had been driving in the snow for eight hours. Joe kept asking, “Is this blizzard?” and I kept saying, “Not, yet!” The next day, we did hear that the storm continued to travel east and did turn into a horrendous blizzard, but by then, we were in sunny Arizona.