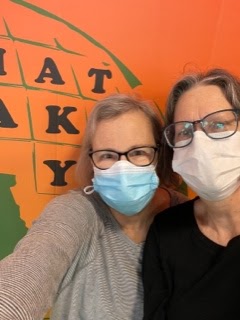 For anyone that is not familiar with New York City and its airports, choosing one to fly into is typically decided by need, availability, and for me, a direct flight.
From New York, the only "reasonable" direct flight to London was on Delta, out of JFK, into Heathrow. Which meant that it would only make sense to fly into JKF, from Nashville, as well, and to stay at a nearby hotel, with a shuttle.
This also happened to be Delta, and with their credit card promotion, I was able to get a one-time $400 credit, with my first Delta purchase, so that was a score!
The hotel was a Wyndham, not the type of Wyndham that you are probably thinking of, but they too had a credit card promotion, a one-time bonus of $150, plus 50,000 points for spending $1000, in a three-month period. So score again!
The Super 8, by Wyndham, in Jamaica, NY is not the prettiest thing you have ever seen, but it was clean, relatively quiet, had a refrigerator, and the most awesome take-out Italian that I have ever had.
They also had a shuttle and let us stay in our rooms until 1:00 pm, since our flight was not until 8:00 pm, last night.
The only problem with this location, and the airport, is the fact that it takes one to two hours to get into Manhattan, so a sightseeing trip was out of the question for us, which meant many hours in the airport.
Once it was time to go, an "elderly" man came out to the un-air-conditioned van, set off the beeping alarm, which he could not figure out how to turn off, and then could not get the beeping van started.
We were melting, as NY is having a heat wave. He went into the hotel, and Joe figured out how to turn off the alarm and start the engine.
Mr. Man got behind the wheel and literally took off like a bat out of hell! Backed right out into traffic and floored it; it was a short, but very scary ride! 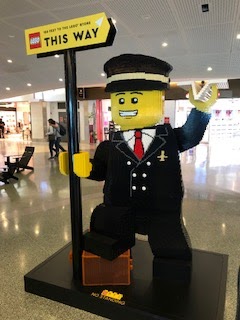 Once at the International airport, we were pleasantly surprised that there was a very little wait to check in or go through security, so I chose to forego my wheelchair, and walk, nice and slow, to a nice restaurant for lunch.
We had a lovely lunch and sat there for many hours before proceeding towards our gate. which was packed with early flights, so we found an empty gate to hang out and wait.
We were supposed to board at 7:05 pm, but that got pushed back to 8:00 pm, then 8:30 pm, and 9:00 pm. Around 9:15 the crew showed up, so we remained hopeful. The crew was there, but the plane was not. Apparently, it was coming from the hanger, whatever that means.
Somewhere around 10:00 pm. the plane arrived and we boarded, thinking Thank God, it looks like we will still make our trip.
Once on the plane, we began to taxi, and taxi and taxi. When we had been taxiing for an hour, I said to Joe, "It seems as though we are going to drive, all of the way to London!" Fifteen minutes later and the captain comes on over the speaker.
He said, " I am really sorry to tell you this, but we were second in line for take-off when we got a call to return to the gate to pick up five boxes of luggage." Evidently, five boxes of luggage is a lot of luggage, so they made us turn around.
What? How in the world does this happen? On top of having to wait while the luggage was put on the plane, we also had to re-fuel, because of the long taxi!
We finally took off at 12:15 am. It was an extremely long day, but I can say that the Delta crew was amazing. I have no complaint about the flight crew; the baggage crew? well, maybe.
I was grateful for wheelchair assistance from the plane, through immigration and customs. It was fast and efficient and since we only brought carry-ons, it was a piece of cake.
We found the underground and headed to our next hotel; a Travel Lodge right by Kings Cross, and St. Pancras, because of the location. It is close to the station where we will have to take a train to Dover, to get on our cruise. 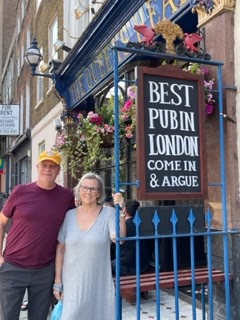 Good old Google took us the roundabout way to the hotel, up cobbled streets and over bumpy sidewalks. Even though we only had a carry-on, a backpack, and a pillow bag, it was still hot, and difficult! I was grateful I didn't have a bigger bag.
Once we got to the hotel, we were able to check in early, thanks to the sweet girl with red hair. I think she took pity on me.
They put us on the top floor, so it would be quiet, which we thought was going to be awesome. IT would have been, other than the rooms had no air-conditioning, and for those of you with CML, you know how getting overheated makes us feel; miserable.
I went BACK downstairs, to the front desk, and asked about the air-conditioning. A different, very helpful gal, also took pity on us and convinced her supervisor to allow her to move us down to floor one, where she whispered, that it is the only floor with air-conditioning.
We were elated! And while much much better than the 6th floor, our room's air-conditioner barely works, but the other one works well. BACK to the front desk, I went, and she promises to send maintenance in, in the morning and she brought me another fan. 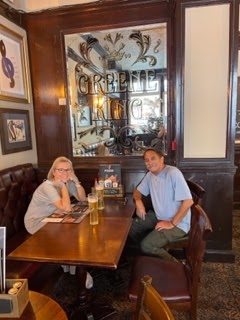 Fortunately, it is cooling down and we are able to open the window. At this point, I have no idea what time it is, but we all decided we should go get a bite to eat, and try and stay awake until 9:00pm.

We had a lovely fish and chips dinner and a quaint pub around the corner cooled off and headed back to our room, where I took a cool shower and am getting ready to hit the sack!
Tomorrow will be a better day and we will never make fun of the Super 8, in Jamaica, NY again!
'Night, y'all!