Cemetery Stomping; Looking for My Sister

Today we head to Gettysburg, Pa. but before we leave Scranton I have one more item on my wishlist; I want to visit my sister's gravesite.

When I was only twelve years old, my seven-year-old, baby sister, died in an unusual, tragic accident. The accident occurred after we had been swimming at the local country club, in Marion, Va., where we lived.

Evidently, Patti headed to the car before the rest of us and somehow knocked the gearshift, of the car, out of park. The car began to roll, and I imagine that she was frightened and tried to jump out of the car. The car ran over her little body, and she died five days later, in our local hospital.

We will never know all of the details from that day, and I am sure that my memories are clouded.
This was evident yesterday. While visiting with my aunt and cousins, we were looking at old photos; I picked one up and said, "This was taken in my bedroom, in Virginia!" It was a photo of me, my two sisters, and three of my cousins. My cousin said, "Yes! We were visiting with you a week prior to Patti's accident. We got the call about the accident shortly after we got back home."

I was stunned. I kept looking at the photo, yet could not believe what I was seeing. It was definitely me, my sisters and cousins, sitting on my bed, in my bedroom. How could I not remember their visit? Spending time with my cousins was always very special, and something that I always looked forward to. We always had a great time.

Seeing this photo, I realized that it could very well be, one of the last photos taken of Patti, before her death. I now wonder what else I have blocked from my memory.

What I DO remember is being devasted, and profoundly sad. I also remember not wanting to leave my sister's side at the funeral homes. I was disgruntled that I could not be a pallbearer and that she was not going to be buried next to my Nanny. 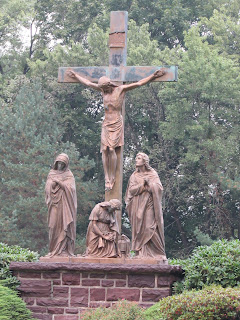 Patti was to be buried in the cemetery that my father's father was buried in, where there were plots for my parents as well. That was all I knew about the cemetery and thought that someone that lived in Pennsylvania would know where I could find her grave. The only time I had ever been there, was the day of her funeral.

My dear, sweet aunt had the correct cemetery and my dear cousin sent me the address. They did not know exactly where she was buried, but we're pretty sure that she was at St. Mary's of Maternity Cemetery; strange name, huh?

So we set off to see if we could find her. We put the address in the GPS and headed out. When we were really close to our destination, we saw a cemetery and immediately stopped, thinking we had found our mark.

We both got out of the car and headed down different aisles of headstones. We were looking for "Bielik" and I prayed that I would find her. It was rainy and cold and the mosquitos were out in full force.

As I was walking along, reading headstones, I came upon two armed policemen. They asked if I had seen anyone with a hoodie on, run through the cemetery. I said no, and they warned me to be careful, as someone had just robbed the bank across the street!

We took that as a sign to leave and realized that we were in the wrong cemetery. 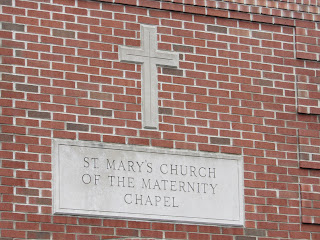 We continued on our journey and arrived at St. Mary's. My aunt told me that she thought that the cemetery's name had something to do with babies, and she was right. There was an odd area, with a large monument of an angel that said "Babyland." No headstones or markers, so don't even ask me what that was all about! It was weird.

But, the cemetery was pretty, like my mother had said, with many trees and rolling hills, so we started trekking through more and more headstones. Eventually, because of the rain and the mosquitos, and the size of the cemetery, we started to drive up and down the aisles. We never found her grave. 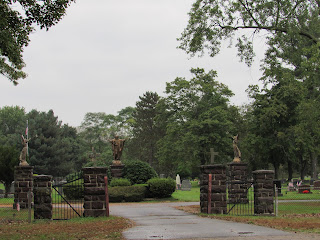 Eventually, we gave up and headed to Gettysburg. I was a bit disappointed but knew that I had tried my best. I also knew that I would be able to find the information and location of her grave, once I got home and went through my mother's papers. I should have done that before I left, but I didn't, and it gives me an excuse to go back again!

My sadness did not last long, as the next day, my cousin told me that he was able to locate the plot where my sister was buried through archives at the cemetery. (they were not open while we were there) and within a day, Joseph had found Patti! 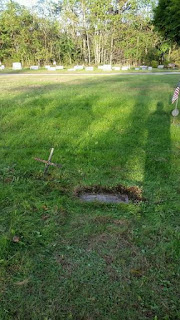 He sent me photos of all who were buried there, and we quickly realized that we had been just on the other side of the main tombstone, where Patti was buried. Evidently, that particular headstone had names on both sides. The side facing us, during our search had two names, which we assumed were the only two names on the headstone.

BUT, we were wrong! On the other side of the headstone was the name we were looking for; Bielik, and as a footstone, there was a cross, with most of my sister's name on it. The cross looked as though it was made from wrought iron, and was leaning to its' side. It said "Patricia Lynn" across the "arms" of the cross and had said "Bielik" down the middle. Plain and simple, and now, thanks to my cuz, it is standing straight and tall.

Our mystery had been solved, and I cannot thank Joseph enough for his persistence and kindness in helping me locate Patti's grave. 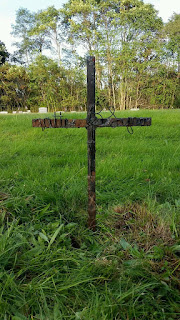 I am not sure how I feel about her "marker" and am honestly shocked that it is still there. I am sure it must have been my parents choice, but I am not sure when the last time was, that they visited her grave, and if I should install something more permanent.

Some of the letters are missing and some are broken. I suppose that I could find meaning in that, as she has been missing from my life for so long, and that she left so many broken hearts behind.
I suppose that I will have to ponder that decision and talk to my siblings, but one thing that I have learned is that when you are a gypsy, cremation is definitely a viable option.