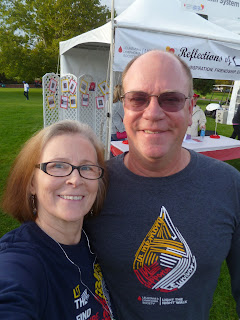 Last year was the first time that I had ever done any sort of fundraising, and it was such a great experience that I decided to do it again!

Light the Night is the Leukemia & Lymphoma Society's big fundraiser of the year,  which raises money and brings awareness to blood cancers; I guess you could say that it took  developing leukemia to get me motivated, but I figure better late than never, right?

Despite the fact that our actual Light the Night Walk was on October 1st, and we had out of town obligations,  I still chose to participate in the fundraiser, and to raise as much money as I could for research, for blood cancers.

Since last year I had so many amazing people help Dancing My Way Through Leukemia raise an impressive $2k, I decided to set this year's goal at the same $2k mark. Although we didn't quite reach our goal, we were really close; we raised an impressive $1750  for the LLS, in two short weeks; and THAT is pretty darn awe-inspiring! Thank you, to all who donated to my team; I couldn't have done it without you.

(PS; there is still time to donate, if you would like to help me acheive my goal) 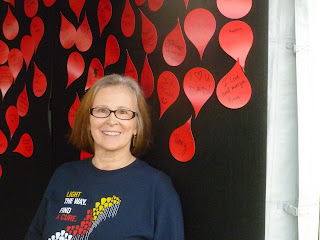 Any way, the day of the walk had arrived, and my fund raising efforts had come to an end. The festivities were about to begin in downtown Boise, and we were packing to leave. I was feeling a bit bummed knowing what I was missing. I knew that there would be throngs of people; supporters, survivors, patients and many others walking in memory of those they had lost. I knew that the true meaning of Light the Night, was the culmination of so many people touched, in one way or another, by blood cancer.

It is the once a year celebration for the Light the Night campaign, applauding all that has been accomplished, through funds raised by all of us, to help find a cure for blood cancers. It is an outpouring of love and support, which is so apparent when the sea of people literally "Light the Night" and walk as a single unit, with their lanterns glowing.

Just as I had resigned myself to the fact that I was missing the big celebration, we received an email from the airlines; our flight that was due to depart at 6 pm, had been delayed until 9:30 pm. I could scarcely believe what I was reading, and what it meant. What it meant, was that we could swing by the festivities, on our way to the airport. We were going to be able to attendthe opening ceremonies for Light the Night! 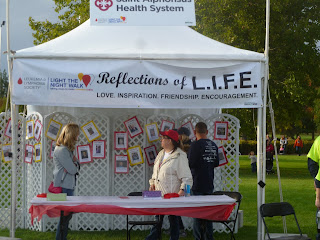 I swear that it must have been a God thing; I was meant to be there, even if it was just for a short time. I know that it was a major inconvenience to many, as we all missed our connecting flights and had to spend the night in Oakland, but I truly believe that all things happen for a reason.

Although we would not be able to join the actual "walk",  we were still able to participate in the activities which led up to the walk. These activities of course stir up many mixed emotions; emotions of gratitude, graciousness, fear, strength and sadness.

As a person  living with a chronic cancer, one that must fight this cancer every single day for the rest of my life, I am in total awe of the support and kidness, of so many.

Attending the Light the Night walk brings the palpability of the scores of lives that are touched by blood cancers to the forefront of my consciousness. It is always bittersweet, as the walk is not just for survivors; it is also in memory of so many, who have already lost their lives to blood cancers, and so many that are still hanging on, fighting the good fight. 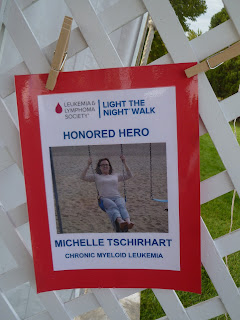 Once again, I had too many names to put on the memory board; too many of my CML buddies were lost again, this year. It is also a bit diconcerting to see yourself on the wall, in the "Reflections of Life" booth, and finding out that the "Boy of the Year" in Boise had relasped was nothing short of heartbreaking; but seeing and feeling the support from so many, is so humbling that it  gives those of us fighters a second wind; a boost that fill our sails, and helps us keep on- keeping on, praying that someday a cure will be found.

It is the Light that shimmers and keeps us striving to live our best life and to help others do the same.
Another really important factor in attending the festivities, is to give thanks to my dear sweet Alisha; a young woman who works so incredibly hard for all of us. She goes above and beyond and is to be commended!

She is the one that made sure that those of us still fighting the good fight, had Survivor/Fighter shirts, instead of Survivor (only) shirts. Boise was the only chapter in the LLS to have these special shirts printed.

She went out of her way to see that this year I would not have to alter my own shirt, and that all of the other patient still in treatment  could join me; wearing our Survivor/Fighter shirts proudly.

We would no longer have to explain to other Survivors that we didn't have our treatment completion date...yet.; that we were still fighting the good fight, and had yet to reach remission. We could find each other and share encouragement, hope and faith knowing that we really, truly knew what each other was going through.

We now had our own "club"; the Fighter's Club! Not a club that any one would want to join, yet a club that can stand strong, and together, for at least one night. 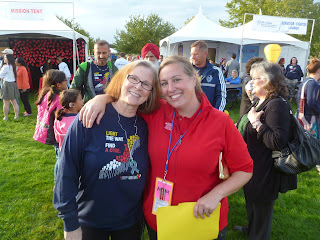 Thank you, Alisha. I hope and pray that other chapters will follow your determination and have Fighter's Club shirts made for their patients, for next year.

It has been an honor to have so many people donate to the Leukemia Lymphoma Society in my behalf, and I thank each and every one of you from the bottom of my heart.

I am alive today because of people like you, and I intend to do my best to create awareness of the many lives affected by blood cancer. I will try my best to spread hope, faith and cheer and pray that my journey may be long, and inspiring.

We should never forget to Light the Night!!