Let me preface this story with the fact that I do not dislike dogs; however, any one that knows me would never consider me a “dog” person. Yes, I grew up with dogs and my kids had dogs; any of you know that if your kids have dogs, in reality, they are actually “your” dog. I liked our dogs; they were all really, really great, indoor family dogs. They protected us, loved us, entertained us and were always a consistent and loyal companion.
I did what any pet owner would do; I fed them, cleaned them, took care of their medical needs, bought them things to make their life happier, taught them to sit, stay, shake, roll over, not beg, sing to the harmonica and other such dog tricks and manners; I occasionally even pet them. I drew the line when they tried to lick me and never let them lie to closely. My kids were great at sharing their beds and their food with the animals, but I never took any part in that behavior. I also never went out of my way to be extra affectionate to them. I don’t know, I think the lolling tongue, slobbery mouth and doggy breath just got in the way.
Fast forward: I have been living in a pet free environment for many years. I have found that at this stage of my life, I like it that way. No animal hair to clean up, no animal hair on my clothes, don’t have to worry if I leave something yummy on the counter, no poop to clean up, no chew or clawed furniture,  no food or water bowls to fill and no worries when we travel. Yes, I know that there are many, many pluses to having a pet, but right now, for me, I am enjoying the freedom. 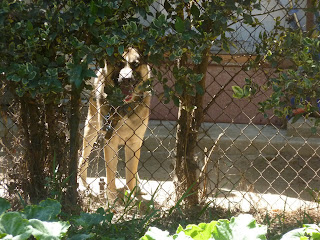 So, just what do you imagine was chained up in the corner of our yard, back by our garden, six or so months ago? You guessed it, a dog; a very pretty shepherd-looking dog. He was medium sized and still a puppy. He was kind of tan and silver with the most beautiful blue eyes that you have ever seen and he was ferociously aggressive. Every time that we walked into the garden area he would begin to snarl, bark and charge the fence. He appeared vicious. He barked all day long and went crazy when he saw us. I truly believe if he had been given the opportunity, he would have eaten us alive!
I think that it is criminal to own an animal, if you are only going to neglect and ignore it, and to chain it up in the very back corner of your property.  Why bother, it is cruel.
At some point, several months into this new addition, I began to feel really sorry for the dog, which by the way is named “Elvis.” I started talking to him and told Joe to stop spraying him with the hose and to stop yelling at him. I deduced that the dog was actually; probably just feeling really threatened and scared. Here he was, chained in the corner, on a four foot chain, feeling totally vulnerable. Telling him to stop barking for the past several months wasn’t working, so I thought that I would try a different approach. I was getting sick and tired of being barked at in my own yard!
I went to the store and bought long skinny doggy treats; the kind that I could stick through the fence without losing a finger or hand. I started visiting and talking to him every day and when he stopped being vicious, I poked a treat through the fence; he snarled and snapped and grabbed the treat, looking at me very suspiciously. The next day, he approached me cautiously, barking less. His ears were pinned back as he approached me and the fence; I kept repeating “Nice, nice, be nice,” and he actually took the doggy treat in a much “nicer” fashion. Eventually he began to sit, facing our yard, always waiting for me and his treats. He now only barked when I left, or when he saw me in the yard and I didn’t come for a visit. Joe started tossing crook neck squash over the fence for him to play with; that was the highlight of his day. This routine went on for a month or so.
A few days ago, after I gave him his treat, he started tossing it up into the air and catching it. He so wanted me to play with him. Sensing my fear and reluctance, the damn dog brought the treat back over to the fence-line and backed away so that I could reach out and retrieve the treat. After I once again had the treat in my hand, he started wagging his tail and waited for me to toss it to him. He was just so cute. He kept coming to the fence-line and dropping his treat. Eventually I allowed him to smell the back of my hand; I even let him lick me. Brave or stupid I am not sure; I’m thinking that the chemo has definitely given me brain damage!
Two days ago, he put his paws up on the fence, turned his head and put his side against the fence so that I could pet him; he is so smart. I cautiously stuck stick my finger through the fence and touched his side; he did not move his head. By the end of yesterday, he and I are old pals; I now reach right over the fence and pet that darn dog. When I offer him his treat, he ever so gently takes it right out of my hand and places it on the ground, waiting to eat it until I am gone. I find myself visiting him four or five times a day and realize just how apparent it is that one really does catch more dogs with honey, than vinegar.
Way to go, Elvis! Now my only fear is that the neighbors will realize that their dog likes us better than them and they will move him to the other side of the yard. Who would’ve ever have thought that the non-doggy lover could become so attached to a dog that wasn’t even their own. I am guessing that it must be pure empathy of not being in control over one’s own destiny; neither Elvis nor I can change the hand that was dealt to us. His, a life of confinement, mine, a life living with cancer. What we do have control over is our attitude and how we choose to live under our respective circumstances.
Posted by Michele at 12:37 PM