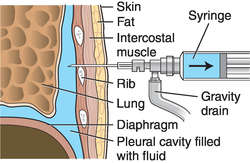 As suspected, and expected, I have accepted (HAHAHAHA) the fact that I need to have another thoracentesis. No biggie; I am now a pro at having a needle/cather slipped between my ribs and into the pleural sac, around my left lung!

This is an outpatient procedure, which they perform at St. Luke's, in downtown Boise. The fact that they are always on-time, leaves me little time to fret over the procedure, itself. I have gotten to know the usual techs, due to the frequency of this procedure, so when a "new guy" showed up to do the procedure, I was wary.

I told him that Kevin had done my first procedure and he had "done it the best"! Just as I was touting Kevin's horn, he walked in to observe "Bill", from Florida. Bill and I were chatting about Florida, as the assistant was laying out the instruments used in the procedure.

I told him that he had big shoes to fill, and that the shoes were on the guy standing right in front of him. I asked if he was going to use the aerosol Lidocaine to start, and he said if I wanted him too, he would. I told him to go ahead and "Snap-it" it to me! 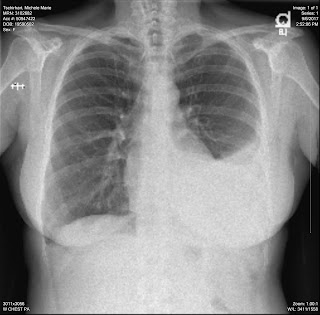 As Kevin and I were talking, I heard Bill, say, "OK, we are draining." Huh?? How in the world did that happen??? Typically I am told to "Be quiet", "Hold still", and "Spread your ribs." And then I wait and anticipate the amount of time that it takes for the worst part to be over; the needle to be inserted, and then removed, with the catheter left draining the fluid.

Bill had literally inserted the needle, pulled the sample tubes and hooked up the collection container without me even knowing that he was doing the procedure; HE is the new "King of the Thoracentesis Procedure!" It was awesome, and easy, and I prayed that once the tube and fluid were removed, that I would be able to breathe easier.

They removed 1.3 liters of fluid, which is actually the least amount that has ever been removed, and felt as though they had removed "most" of the fluid, that was there. Since we  all wish to avoid the extreme side effects of coughing and pain that can occur, after the procedure, due to a large amount of fluid being removed, we typically ere on the side of caution.

I am not sure exactly what I anticipated, as far as the amount of fluid they collected, as I was off of Sprycel for two, two week periods and several other days, while I was in Europe (oncologist approved). One one hand, I expected there to be much less, on the other, it concerns me that the underlying "cause" may not really be the Sprycel, but the fact that the lung is actually trapped.

I suppose it will be a wait and see how quickly it refills and a good conversation with the pulmonologist, before really getting to the bottom of it. With my lowered dose of Sprycel, I really do not believe that it is 100% of the cause.

It is National Leukemia & Lymphoma Awareness Month!
Please donate to my Light the Night Fundraiser, if you can!
http://pages.lightthenight.org/oswim/Boise17/mbieliktsc
Posted by Michele at 1:09 PM