Headed Back to the States!

I must admit that I have mixed feelings; on one hand, I am excited to be going home, I know I need the rest, and I know I need to assess the damage I may, or may not have done to my body, regarding CML, while I have been gone. On the other hand, I want this fabulous journey to continue; there is still so much to see and explore, that I just want to keep on going. I do not know what it is about being in a foreign land, but for me it was exhilarating, inspiring, fascinating and freeing. 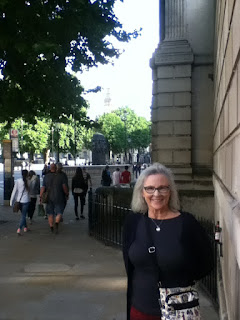 Since the airport is quite a ways away, we knew that we would be taking a bus, from Victoria Street station. We also knew that we could either use the tube, or a taxi, to get there. The tube would not cost us any additional money, but there are stairs and suitcases involved, so we opted for a taxi; (because it is easier). We are already succumbing to the "American" ways! lol

Fortunately, there are almost always taxis parked right in front of our apartment; waiting for calls from the Marriott, on the corner. So we were able to just snag one of those, and be on our way. We stopped at our beloved "Paul" boulangerie and grabbed our last baguette sandwich for the road. Oh, how I will miss the food and lifestyle in Europe!

While driving to Victoria Street Station, I soaked in the scenery. I tried to grasp images as they flew by, hoping to forever imprint them in my brain. It wasn't long before we were at the bus station and we were able to get tickets on the next bus; leaving in about half an hour. 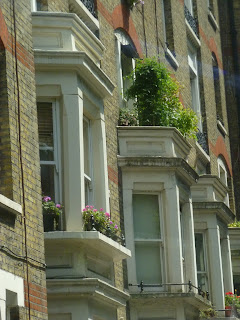 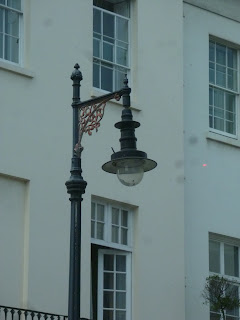 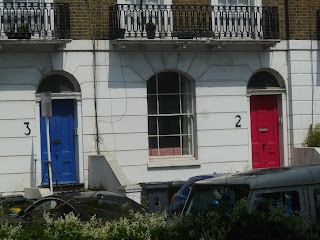 There was a room full of people that would be traveling to the airport on the same bus, and I wondered where they would be going. I was intrigued by a young girl, with a backpack and wondered if she was headed "home", after trekking through Europe; a dream that I have often had, but now fulfilled by staying in hotels, as opposed to hostels, while rolling my suitcase, verses carrying my wares, on my back! I guess that is one major benefit to traveling when you are old.

The bus was quite comfortable and offered scenery of places that we had not visited, outside the center of London. I enjoyed seeing the neighborhoods, the graffiti,  the markets and the other old buildings and churches that were in the outskirts, of London. 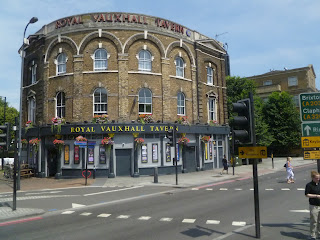 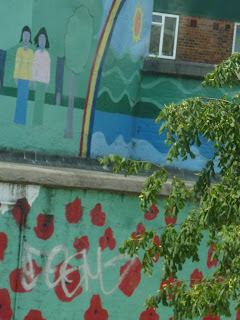 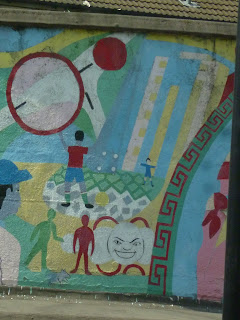 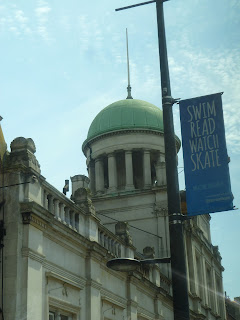 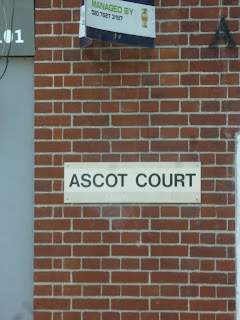 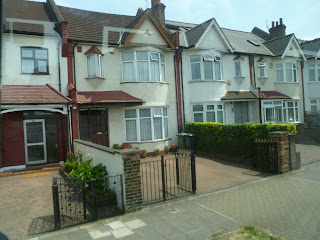 Once we got to the airport, we were pleased to find that they actually had a button to push, to call for wheelchair assistance; I imagine that I could have trudged into the airport and found my way, but I was truly exhausted and grateful for the "ride". As it turned out, it was quite far, and quickly getting through security  and baggage check, was a blessing. The gentleman that was pushing me was a cancer survivor, and said a prayer and gave me a blessing; I swear, that between all of the blessings, prayers and holy water that I have received, I am sure that my leukemia has stayed in check, during this trip, despite the medication holidays and interruptions that I have endured. 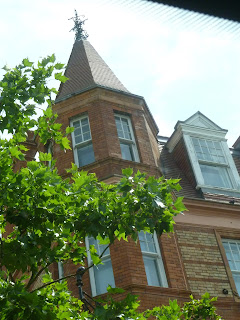 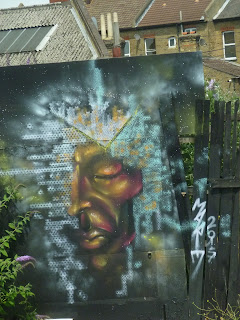 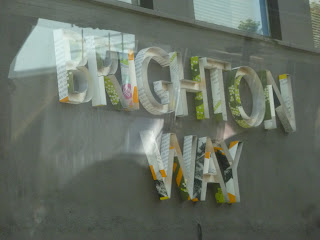 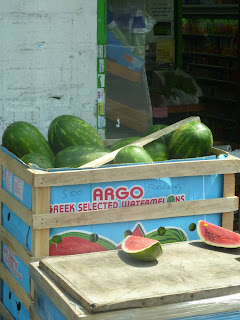 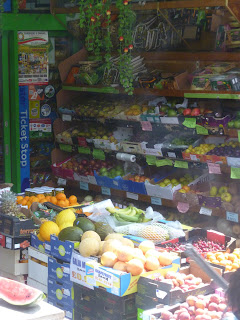 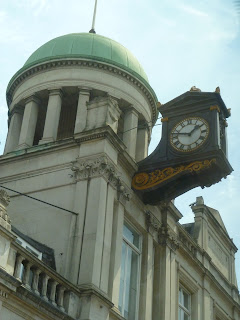 Everything thus far, has been a breeze, but what fun would that be? Upon arriving to the  Norwegian Air, check-in and luggage drop, we had our first luggage surprise. Keep in mind that we basically have the same luggage going home, as when we came here; no extra bags, and very few "souvenirs". Plus we have used a great deal of liquid weight, since we have been gone, so that should reduce our weight. We flew TO Europe on Norwegian.

We have pre-paid for our two large suitcases, and we each had a small carry-on, that fits under the seat and a "personal" item; Joe a backpack and me a market bag, which I put my purse in. We thought we were all set.

Joe went to put our large suitcases, on the scale,  for a weight check, and the gal at the counter said, "No", I want to weigh your carry-ons. (?) Huh? And she meant that  she wanted to weigh every single thing that we were carrying, on the plane.

So Joe put his little rolly on and she said, it is too "heavy", we were SO confused. What do you mean, too heavy?? It fits right under the seat?  What she meant was that because of how much it weighed, we had to pay for the carry-on, regardless of the fact that it fit right under the seat! It was ridiculous, and we paid the $40 for the extra few pounds, that were in the carry-on, that fit under the seat. I strategically hid my "personal" items under my pillow, so as not to encounter another $40 charge.

This is the very first time that I have ever experienced "weight" being factored into a carry-on baggage, so consider yourself for-warned; I WILL be looking at luggage requirements and restrictions more carefully, in the future! It was crazy.

Despite the luggage complications, we were still wicked early, and had a lot of time to spare. We enjoyed our sandwich and patiently waited for our plane; I was looking forward to getting on the plane, so that I could sleep! We chose to fly to New York, as opposed to Boise, as it was direct, and I figured that breaking up the long trip would be wise, as far as really pushing my limits.

We were planning to stay two nights, in New York, as the day that we would be there, was our anniversary, and I LOVE New York!

The plane was on-time, and we boarded with no complications; our expensive carry-on, slipping right under the seat; despite its' extra few pounds..............oh, brother!

The flight was uneventful, and we arrived at LaGuardia Airport on-time, but our day was far from over. Once again, our hotel was not at this airport, but at Newark Airport, the airport that we would be traveling from, when headed to Boise. So, one more bus ride before we could call it a day.

This was a LONG bus ride that took us into the city, where we had to get another bus to Newark airport, and then the shuttle to the hotel. Normally, I would be taking in the sites of NYC, but instead, I crashed! I was just so, so, so tired. I really cannot believe that I slept, in the heart of the city. 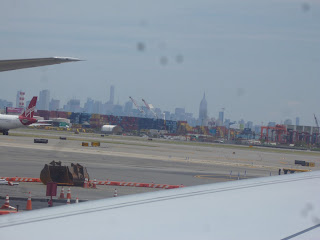 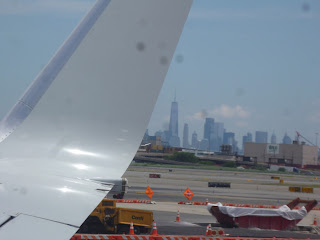 I think we finally made it to the hotel around 11 pm, New York time; beyond exhausted, but in one piece. Ironically, when we arrived at the hotel, we saw that the Big Apple, country dance event was being held at our hotel. Something that I would have loved to have attended, IF I had the energy!

As I crawled into bed, I had dreams of going into the city, in the morning, and maybe even the dance event in the evening. I wanted to go to Central Park, and to have a cannoli and a piece of pizza, and in my wildest dreams, I wanted to go to a show.

Upon waking to a rainy morning, I quickly realized that my dreams were just that; dreams. There was no way in hell, that I was going anywhere! lol To say that I was "done", was an understatement. We called room service for breakfast, Joe went downstairs to bring up lunch, and I DID manage to make it to the hotel restaurant for dinner, which was a bowl of soup for me.

I felt like crap, and was beyond exhausted, and was a bit bummed that I could see NYC, and that it was our anniversary, and I could not enjoy any of it. I did however console myself with the memories of all that we had done, all of the places we had been and all of the experiences that we had enjoyed. 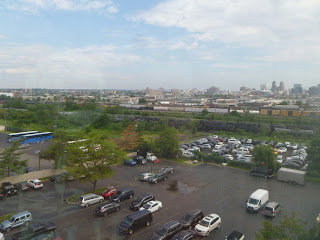 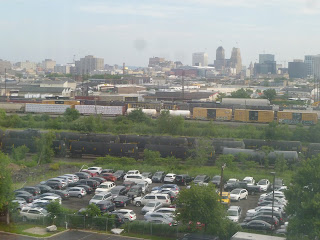 One more long travel day and we would be home. Home to sleep in our own bed, home to see if the garden was growing and home to recover from the most amazing trip of my lifetime.

Looking back six and a half years ago, to the day that I was diagnosed with leukemia, I never would have dreamed that this trip would have been possible. At that time, I did not know whether I was going to live or die, but I knew, that if I lived, I would find a way to continue to make my dreams come true.

I am blessed, and I plan to continue to dance, and travel my way through leukemia!
Posted by Michele at 4:07 PM