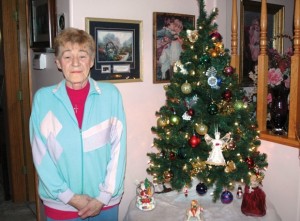 Like many grandmothers, Eva Schamp will again spend Christmas with her family in 2011.
Gary Schamp, her husband of 56 years, says that’s a bit of a miracle. Eva thinks it’s a miracle others in her situation can experience, too.
Eva wasn’t supposed to be here. Through her own fighting spirit, the dedicated work of her doctors and caregivers, and the unyielding support of her family, she has defied the odds.
“We’ve had a few miracles through all of this,” said Gary Schamp, “when you think about where we started.”
Eva, now 72, was diagnosed with leukemia not long before Christmas in 2001. She was told it was terminal and she had not more than six weeks to live, probably less.
Eva had spent much of the summer fighting fatigue, breaking into sweats and lacking energy.
“I finally went to the doctor and had blood work at 10 a.m. one morning,” she said. “By 3 p.m. they called me back in.”
Her tests had shown the presence of leukemia and she was admitted to the Good Samaritan hospital in Corvallis right away.
“I’d never even heard of an oncologist until then,” Eva said.
It was determined she has Philadelphia chromosome, an abnormality that causes a rare form of leukemia with a dismal prognosis.
That was on Dec. 17, 2001.
Last Saturday, Eva and her family celebrated 10 years of life since her diagnosis.
“It wasn’t anything big. We just went out to dinner,” Eva said. “Not all of the family could be here.”
Family has been an important part of Schamp’s recovery. Gary and the Schamps’ daughter, Mary Mintken, traded shifts watching Eva and taking her to daily visits at Good Sam.
“I had gone out and made arrangements for what we were told was inevitable,” Mintken said. “But mom kept going one day to the next.”
With the bedside vigils of her family and through her own determination, she was still alive.
“First she was a week past the time they gave her. Then a month. Then six months,” Mintken said.
“Mom deserves a lot of credit. She had such will power.”
“I fought it,” Eva said. “I hope what I’ve been through can encourage others.”
In June 2002, after fighting infections, lengthy hospital stays and administration of different drugs through IVs, Eva began taking Gleevec, a drug developed in part at Oregon Health & Science University in Portland that had just been approved by the FDA.
Gleevec is among a new class of medications that works by blocking a specific protein that enables cancer cells to multiply.
“It was designed strictly for that form of leukemia,” Eva said. “It’s expensive and we weren’t sure about it, but it certainly seems to have worked.”
Schamp went into remission. Over the last 10 years she has regained her active lifestyle.
Schamp gardens, does all her own housework, travels with family and paints. She also meets regularly with a group of other cancer patients.
Eva admits the drug, which she still takes daily, was a big part of her recovery but doesn’t discount the efforts of her family and doctors — Stephen Neville and Peter Kenyon.
“I was fortunate to have such support and God was there too,” Eva said. “I hope my story can influence others in that situation to never give up. There’s always a miracle out there.”