Day 3: Maybe I Really DO Have Leukemia 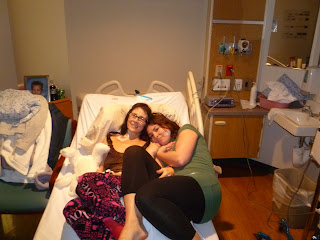 February 11, 2011 is the day that I began to realize that maybe I really did have leukemia. It was not a dream or a bad joke; it was real. Upon my first conscious thought of the morning I realized that I had tears streaming down my face. It was very early and still dark in my room; I was all alone with my own thoughts. It seems that my sub-conscious self was trying to tell my conscious self that this nightmare was real and I had better suck it up and get ready for the battle. This was the very first time that I really contemplated my fate, as well as my journey.
Of course this pity party did not last long as the parade of health care professionals began their day. Shift change is a very busy time. You had better hope that you do not need anything important during this turn over. I believe that they try and distract you with “breakfast.” I ordered oatmeal as I thought it might slip easily down into my rather funky stomach. Ha-ha joke was on me! It was so sticky that I could turn the bowl upside down and it would not even budge. Next: Scrambled eggs? Ba-boing! Bouncy little yellow things were on the plate. The potatoes weren’t too bad other than they were full of onions and peppers, two of my favorite foods that no longer smell or taste very good. Thanks chemo, and only one dose! The old standby will have to do; Graham crackers and Pepperidge Farm cookies.
My starting blood count for the day was just above 280,000. I was very pleased as the pheresis person had warned me that it might go up overnight. The only thing on my schedule for that day was leukapheresis and chemo. 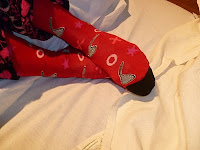 After resting for a while I opened my eyes to a beautiful sight. My lovely daughter was standing at the foot of my bed. She said that she would’ve been there sooner but she had stopped to get some warm, soft, fuzzy things for me. One of the worst symptoms of leukemia is night sweats. First you get soaking wet and hot and then you begin to freeze. My daughter brought me a pair of polar fleece jammie bottoms with hearts and “I Love You’s” all over them and a Super-Girl top. She also brought a very soft jacket that I am still living in. The knee socks were a kick, with hearts and kisses; it took me a moment or two to realize that it is almost Valentine’s Day. Good thing that I had already bought cards! I quickly changed out of my damp jams and into the new, soft warm ones.
Since I was looking “SO Hot”, my daughter took me for a 15 minute hike around the nurses’ station. After 8 laps we went back to my room and climbed in my bed. Having her there to snuggle in the bed with me brought me such joy and inner peace. My daughter has suffered great loss in her life, her greatest love died in a car accident when she was only 17 and several other friends died a few months later. She knows and understands loss. She and I have always been very close and I am so dreadfully sorry that she must now face my cancer. I know that being here with me helped assure her that I was going to be just fine. She is still having a difficult time not being with me every day.
Within the hour Joe was also back at the hospital; I now felt safe and cared for and ready to face the day. Barry, the new leukapheresis nurse showed up about 2:30 in the afternoon. They were bound and determined to finish up my day much earlier today, than yesterday. I told him that he was lucky that this was day two because I had gotten most of my questions answered the day before. He said he didn’t mind answering questions at all and even explained the process in more detail than Nelson. He said that they also used this machine to harvest platelets and that it was a life saver for CML patients like me. I actually tolerated the procedure better today as he had notes from the previous day and made the necessary adjustments.
Of course, no sooner did he show up and get started, when my parade of visitors began. My youngest son and his Dad showed up, my sister and my dear friend Peggy. The machine itself took up the entire left hand side of the room and with LeeAnn and Joe already IN the room, it was a tight squeeze! My sister had the good sense to bring me new slippers. They were much more attractive than the garden clogs that I had been sporting on my jaunts around the nurses’ station. While I am sure that seeing me hooked up to this great big machine was a scary sight, I am also sure that seeing me awake, alert and able to laugh and joke through the procedure helped give all of us a sense of hope,  acceptance and security. I was able to explain to everyone a bit about the type of leukemia I had and how we were hoping to get my white blood cells down quickly with this machine. Dr. Han even poked his head into my room in the middle of all the confusion. He didn’t stay long!
We continued on with the leukapheresis for 4 ½ hours and my visitors began to trickle away. I can’t say that I blame them, who the heck wants to be at the hospital unless they have no other choice?  Only my daughter and Joe remained. My daughter came up with the brilliant idea of Netflix. We had never used Netflix before so Joe quickly signed us up and we were Live! I was so grateful that the he now had something to do for all of those hours and hours that he was parked in the chair next to my bed.
Dinner showed up just as they were wrapping up the leukapheresis party. Being that I was quite nauseous and Lee and or Joe had yet left the room, they shared my gourmet meal. Since LeeAnn was staying for a few more hours; Joe left the hospital and hopefully regained some of his own sanity. He has been by my side for three days and must be emotionally and physically drained. I insisted that my daughter not stay too late as she had a two hour drive home and convinced her to wait until I was home from the hospital before visiting again.
The nurse started my chemo dripping just as Joe returned. I was much more comfortable receiving my toxic potion today since I had already survived Round 1. We powered on Netflix and started watching “Californication”, a show that neither of us had seen. We figured that since the whole first season was on instant que, it would keep us entertained while we were stuck in the hospital. I must admit that it was a bit racy and there were scenes that definitely that made us turn down the volume!
I think that I probably dozed through most of tonight’s entertainment, but I did wake up long enough to get my blood results. The white cells were down to 198,000. We were very pleased and my doctor was very surprised. I was responding exceptionally well to the treatments and the chemo. He hinted that my 2 week stay may be shortened as long as I continued to progress at this rate. This was very exciting news and a great note on which to say our good-nights. Day 3 ended on a positive note.
Posted by Michele at 3:11 PM